Northern Jordan (ILO News) A high level Norwegian delegation visited sites of ILO-led initiatives in Jordan’s agricultural sector on Sunday (January 20), to witness first-hand the impact the initiatives are having at creating immediate and decent jobs for Syrian refugees and Jordanian members of their host communities.

Funded by the Government of Norway, the interventions focus on improving local infrastructure and agricultural productivity, while boosting decent job opportunities for workers through the use of employment-intensive methods. They are being implemented in the governorates of Ajloun, Jerash, Balqa, Madaba, Zarqa, Karak, Tafilah, and Ma’an.

The delegation included Tone Allers, Norwegian Ambassador to Jordan and Iraq, as well as Ane Djuve Galaasen, First Secretary at the Royal Norwegian Embassy in Amman, and Sven Skaare, Senior Adviser at the Norwegian Ministry of Foreign Affairs.

They met with local partners, including Mahmoud Al Jamani, Secretary General of the Ministry of Agriculture, ILO field officers, as well as Syrian and Jordanian workers benefiting from ILO employment programmes in the north of Jordan.

“It has been very interesting to visit the projects that we are supporting and to see how they work out in the field,” said Allers, following a tour of ILO-supported greenhouses, forestry sites and water cistern. “We have also seen how the ILO works with local authorities and the government to ensure that women and men find jobs in the sector and we discussed some of the incentives for employers who hire refugees.”

The project has so far benefited more than 1,600 Syrian and Jordanian women and men. It includes work on soil terracing, the construction of rainwater harvesting cisterns, irrigation system installation, forest tree plantation, greenhouse construction and seedling production, which are being implemented in collaboration with Jordan’s Ministry of Agriculture.

As part of its activities, the project is also assisting refugees to obtain work permits, and ensuring that workers from both communities are employed under decent working conditions, which abide by international labour standards, including occupational health and safety standards.

The ILO, in coordination with the Ministry of Labour, has set up thirteen Employment Service Centres (ESCs) to help connect Jordanian and Syrian job seekers with employers in different sectors. Funded by the EU and the Netherlands, the centres offer job seekers with job matching services and training opportunities.

Since September 2017, the employment centre in Jerash has matched around 550 workers, both Jordanian and Syrian men and women, with employers. Almost 30 per cent of these workers are benefiting from the Norwegian-funded programmes.

The programmes are implemented with support from local agricultural cooperatives that are helping Syrian refugees obtain work permits, and raising awareness among workers on their rights and entitlements under the labour law.

In the northern city of Ramtha, which hosts a large number of Syrian refugees, the delegation met with Syrian workers and their families living in a make-shift camp near one of the farms where they have found employment. The families face a number of challenges in terms of employment and living conditions.

“Child labour among children whose parents work in farms is one of the most pressing concerns we have in this sector,” said Maha Kattaa, ILO Regional Resilience and Crisis Response Specialist. “Together with our Norwegian partner, we are looking at ways to reduce the incidence of the worst forms of child labour in agriculture. This includes offering children alternatives to work, by improving their access to education and other learning opportunities, as well as protecting children above the employment minimum age from exposure to hazardous work.”

A 2018 ILO study into employment conditions in Jordan’s agricultural sector found that for logistical reasons, including transport and childcare, many families, particularly Syrian refugees, prefer to remain together to lower the overall cost of going to work. This results in children working with their families in agriculture fields.

The ILO in Jordan is implementing a series of projects with development and local partners to support efforts to increase economic opportunities and employment creation for both refugees and host communities.

They are part of the ILO’s Programme of Support to the Jordan Compact, which builds on pilot activities launched between 2013-2015, in response to the labour market challenges exasperated by the crisis in Syria. Since 2016, the ILO has scaled-up development-focused and employment-driven interventions to create an enabling environment for decent work and job creation. 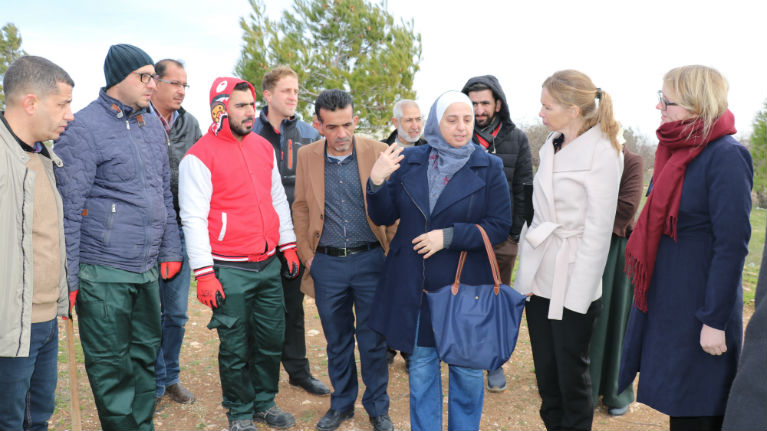