Amman, Jordan (ILO News) A new ILO study has identified persistent deficits in decent work and employment conditions for workers in Jordan’s agricultural sector. A large number of the workers are migrant workers and Syrian refugees.

The shortcomings include a lack of wage protection, an absence of social security coverage for workers, and poor occupational safety and health measures. The study also found evidence of child labour, particularly among Syrian refugees.

The Norwegian-funded study found that the majority of worksites included in the study were rarely, if ever, visited by labour inspectors, who otherwise play an important role to ensure compliance with national labour legislation and international standards.

The results are based on a survey which targeted 1,125 Syrian agricultural workers with work permits, including residents of Jordan’s Zataari refugee camp. It looks at workers’ employment history, work permit status, working conditions and work arrangements. It also includes interviews with 33 employers in the sector and focus-group discussions with informal labour brokers, known as “shaweesh.”

In 2016, Jordan began to ease procedures for issuing work permits to Syrian refugees, as part of its commitments made at the Supporting Syria and the Region Conference, including to reduce barriers to the formal labour market for Syrian refugees.

Maha Kattaa, ILO’s Regional Resilience and Crisis Response Specialist, said study results clearly show that while work permits are a step towards the formalisation of workers, they are not a guarantee of decent work.

“Our research provides an initial overview of the employment characteristic of the sector based on the point of view of 1,125 Syrian refugees who have obtained work permits,” said Kattaa. “The analysis shows that even with the provision of work permits, a lot of work is still needed in the sector to improve the living and working conditions of farmers.”

“There is potential for Jordanian farmers to export fresh fruits and vegetables to regional and foreign markets – but their access to these markets will depend on compliance with decent work principles. International and regional buyers are increasingly aware of the supply chains from where their products are sourced. If farmers can enhance their compliance - for instance by addressing the issue of child labour - it will be a win-win situation for all,” continued Kattaa.

The study falls under the Norwegian-funded ILO project entitled ‘Job creation for Syrian refugees and Jordanian host communities through green works in agriculture and forestry’, which is in its second phase of implementation. It aims to promote better living conditions for Syrian refugees and Jordanians through increased decent work in the agricultural sector and an improved working environment.

Sixty-one per cent of those surveyed were found to be living on or near farms, in tents. This provides workers with easy access to work and limits transportation costs. Yet, fields where crops are cultivated  are often at a distance from towns and cities, where there are basic services, including schools, childcare and hospitals. There are also no set standards for such accommodation.

For logistical reasons, including transport and childcare, many families prefer to remain together to lower the overall cost of finding work. Half of those surveyed reported that children under the age of 15 were working with them in agriculture fields. In addition, 72 per cent of employers that were interviewed in the survey indicated that children did in fact work on their property.


Agriculture workers largely do not enjoy employment protection provided by the Labour Law. There are no provisions that specify a minimum wage, social security enrolment or working hours. As a result, 83 per cent of respondents said they were not enrolled in social security, with an additional 10.5 per cent unsure if they were covered or not.

Most workers were paid US$ 1.40 an hour, and worked approximately five hours a day, five days a week.

Despite the hazardous forms of work in the sector, 76 per cent of those surveyed reported receiving no information on occupational safety and health from their employer, with the majority (86 per cent) reporting inadequate safety provisions at the workplace.

More than half of those surveyed believed that work permits provided additional legitimacy to their status in Jordan, as well as better job opportunities.

Yet, only a smaller number of those surveyed reported having a written contract with their employers, with the majority of workers reporting that they work based on daily agreements, rather than on monthly contracts. 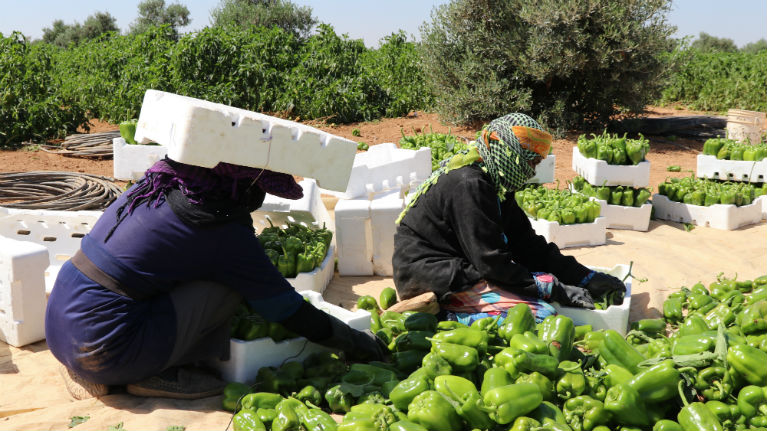 Decent Work and the Agriculture Sector in Jordan: Evidence from Workers’ and Employers’ Surveys [pdf 2788KB]

Decent Work and the Agriculture Sector in Jordan: Evidence from Workers’ and Employers’ Surveys (2018) [pdf 2657KB]