IRBID, Jordan (ILO News) - Hannah moved to the northern Jordanian city of Irbid after fleeing the conflict in Syria in 2014.

The mother-of-one refugee has since struggled to make ends meet. She recently started working for a business owned by a fellow Syrian, decorating and packaging sweets. The work is helping her pay the rent and other expenses.

“Prior to working here, I did not have a job,” said Hannah. “Our situation was very difficult, so I had to work to take care of my family.”

Her work is part of a UK-funded ILO pilot initiative that gives Hannah and other women like her a chance to learn new skills and earn much-needed income to support their families.

Jordan has provided refuge to some 1.266 million Syrians, of which 657,000 are registered as refugees with UNHCR. The vast majority live outside refugee camps, in urban areas.

With the adoption of the Jordan Compact in 2016, the Government agreed to accommodate a specific number of Syrians in the labour market, in return for improved access to the European market, increased investment and soft loans.

Yet recent ILO research found that, despite government measures, the number of women in the labour market remains very low. For some women, their household responsibilities make it difficult for them to leave their homes for long periods of time, while others lack skills required by employers.


“Through group discussions with Jordanian and Syrian women, we found that women from both communities face similar challenges, which prevent their entry into the labour market,” said Maha Kattaa, coordinator for the ILO Syrian Refugee Response in Jordan.

“It is important to try help increase the labour force participation of women through the creation of jobs they are likely to find attractive, as well as through targeted training programmes,” added Kattaa. “We asked women what skills they wanted to acquire and the majority showed interest in sweets making.”

As a result, the ILO partnered with the Obido sweets shop in Irbid, to train some 33 Jordanian and Syrian women in baking, decorating and packaging sweets.

“The ILO told us that a lot of women didn’t have any previous experience or training but were interested in working,” said shop owner, Mazen Obido, himself a Syrian who moved to Jordan a year after the conflict erupted, and gradually established a five-shop chain in Jordan. “So, we agreed to train the women, free of charge, to help them become productive workers in the future.”

The on-the-job training, which took place in a kitchen tucked away behind the shop, lasted two and a half months. It also included sessions on how to market products.

“I learnt how to make Basbousa and Lenza (Middle Eastern sweet cakes). I learnt how to display cupcakes. I learnt a lot of interesting things here,” said Jordanian, Um Yazan. “I want to be able to help my husband. We have children and life’s demands are high.”

The women will also take part in an ILO e-learning programme for Syrian refugees in Jordan that explains their rights and responsibilities under the country’s labour law.

Following the training, Obido offered some of the women an opportunity to work for his business, packing sweets. Yet convincing them to take on work outside of the house was not that easy.

“Most of the women expressed their reservations over working long hours due to their family responsibilities,” said Kattaa. “Therefore, we suggested to the employer to implement the flexible working hours by-law, which was recently issued in Jordan.”

The new by-law reduces working hours for those with family responsibilities, such as women who have young children.

“I work here five hours (a day), from one to five o’clock in the afternoon,” said Hannah. “I am sure there is other work available elsewhere too, but the work environment here is safe and nice. We are like a family and more.”

Syrian Mariam Ramadan is the sole breadwinner of her family. With two very young daughters to take care of, she says she prefers working from home. After completing the training, Ramadan began selling home-made sweets to her neighbours and friends. But she says her biggest customers are university students who study at a nearby campus.

“I took part in the training and excelled in it,” said Ramadan. “Now I am making sweets at home. People know me and know how good my products are. So, through my work at home, I can now secure an income for my household.”

The ILO is now looking to expand its pilot programme by partnering with employers in other sectors to train and employ more women.

These efforts are part of ILO’s wider response to the Syrian refugee crisis in Jordan, which target both Jordanians and Syrians. Initiatives include advocating for the government to facilitate Syrian refugees’ access to work and livelihoods through giving them work permits in specified sectors in line with Jordanian labour regulations. The ILO has also led awareness raising campaigns for Syrian women employed in the agricultural sector to encourage them to join the labour market legally by obtaining work permits. 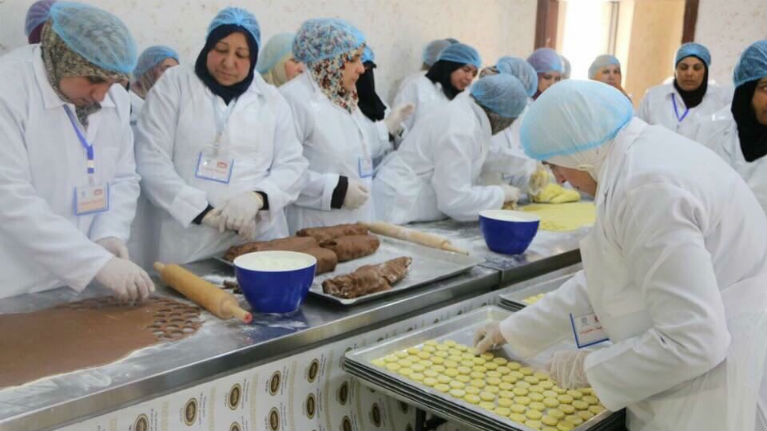