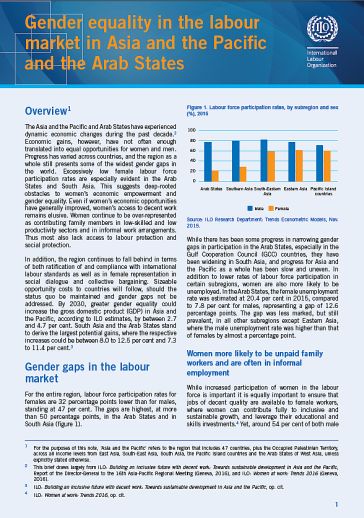 Download:
The Asia and the Pacific and Arab States have experienced dynamic economic changes during the past decade. Economic gains, however, have not often enough translated into equal opportunities for women and men. Progress has varied across countries, and the region as a whole still presents some of the widest gender gaps in the world. Excessively low female labour force participation rates are especially evident in the Arab States and South Asia. This suggests deep-rooted obstacles to women’s economic empowerment and gender equality. Even if women’s economic opportunities have generally improved, women’s access to decent work remains elusive. Women continue to be over-represented as contributing family members in low-skilled and low productivity sectors and in informal work arrangements. Thus most also lack access to labour protection and social protection.
In addition, the region continues to fall behind in terms of both ratification of and compliance with international labour standards as well as in female representation in social dialogue and collective bargaining. Sizeable opportunity costs to countries will follow, should the status quo be maintained and gender gaps not be addressed. By 2030, greater gender equality could increase the gross domestic product (GDP) in Asia and the Pacific, according to ILO estimates, by between 2.7 and 4.7 per cent. South Asia and the Arab States stand to derive the largest potential gains, where the respective increases could be between 8.0 to 12.5 per cent and 7.3 to 11.4 per cent.