Accra (ILO News): As part of the celebration of the June 12 World Day Against Child Labour, the International Labour Organisation (ILO) under CARING Gold Mining Project, supported the Ministry of Employment and Labour Relations (MELR), in organising a National Policy Conference on Child Labour. The aim was to bring stakeholders together to dialogue on the menace of child labour in Ghana and put in place practical and effective strategies to address it. The Stakeholder Dialogue was launched under the global theme: ‘in conflicts and disasters, protect children from child labour,’ with the focus of the Ghana event on the mobilization of resources for the effective implementation of the second phase of the National Plan of Action on the elimination of child labour spanning 2017 to 2020.

The ILO good will address presented at the Stakeholder forum by Mr Emmanuel Kwame Mensah, Officer –in-charge, ILO, Caring Gold Mining Project, shed some light on the issues of Child labour in Ghana and provided assurances of ILO’s commitment to eradicating worst forms of child Labour. Mr Mensah noted that in Ghana, the estimated proportion of child labour is 21% and the importance of distinguishing between child labour and activities such as helping their parents around the home, assisting in a family business or earning pocket money outside school hours and during school holidays. “These kinds of activities contribute to children’s development and to the welfare of their families; they provide them with skills and experience, and help to prepare them to be productive members of society during their adult life” he said.

He further stated that Child Labour is often defined “as work that deprives children of their childhood, their potential and their dignity, and that is harmful to physical and mental development. It refers to work that: is mentally, physically, socially or morally dangerous and harmful to children; and interferes with their schooling by depriving them of the opportunity to attend school or obliging them to leave school prematurely; or requiring them to attempt to combine school attendance with excessively long and heavy work”. He mentioned that reports have shown the adverse effects this has on children, resulting in lower educational attainment and with jobs that fail to meet basic decent work criteria.

Mr Mensah called the Forum’s attention to the global agenda for transformation, the Sustainable Development Goals (SDGs), Goal 8, target 8.7 which calls upon countries to take immediate and effective measures to eradicate forced labour, end modern slavery and human trafficking and secure the prohibition and elimination of the worst forms of child labour, including recruitment and use of child soldiers, and by 2025 end child labour in all its forms. He noted that Ghana has made positive strides towards achieving this goal with the ratification of ILO Convention 182 on the Worst Forms of Child Labour in 2000. He reiterated ILO’s commitment to continue supporting the government in the design and implementation of effective interventions against the menace, including the implementation of the first National Plan of Action (NPA) against child labour; and currently, through the ongoing ILO Caring Gold Mining Project, with focus on reducing child labour and improving working conditions in the Artisanal Small-scale Mining sub-sector. The Caring Gold Mining Project would provide support to strengthen law enforcement, policy implementation, monitoring and access to social protection and livelihood empowerment for vulnerable families affected by child labour.

He concluded by advocating that in commemorating the World Day Against Child Labour, opportunity should be taken to increase the resolve to successfully fight child labour. He called on Social Partners to reinforce their commitment against child labour by mobilizing adequate resources to empower duty bearers to design, implement and effectively monitor child labour interventions across the country.

Launching the campaign dubbed ‘Chance for change campaign for children’ the Deputy Minister of Employment and Labour Relations, Hon. Lawyer Bright Wireko-Brobbey (MP), reiterated the commitment of the President and the government towards the elimination of child labour in Ghana in all its forms. He further assured stakeholders in the fight against child labour of the commitment of the government to implement all existing programmes relating to child labour to ensure its total elimination. The validate National Plan of Action (NPA 2) is being prepared for Cabinet approval. The Chief of Staff, Madam Frema Akosua Osei-Opare, who gave the key note address, took the opportunity to launch resource mobilisation effort towards the implementation of NPA 2. The aim of NPA 2 is to build on the gains of the first plan, maintain the momentum and to effectively deal with eliminating the practice of child labour, a practice that has compromised the health and safety of children of school age in the country.

The event was attended by personnel from the MELR, the labour Department, the International Labour Organisation (ILO), the Ghana Employers Association (GEA), and Ghana NGO Coalition on the Right of the Child (GNCRC), The Netherlands Embassy and child rights advocacy and interests groups was chaired by Okatakyie Dr. Amenfie VII, the Asebuhene and Member of the National House of Chiefs. 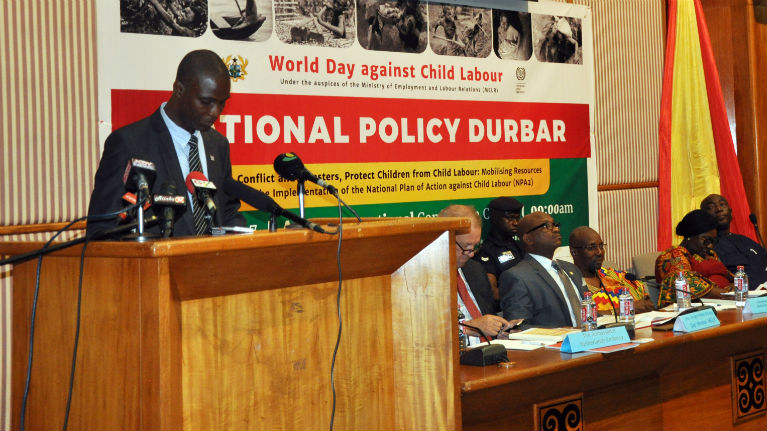