ABIDJAN (ILO News) – Africa, the world’s youngest region, continues to be confronted with high levels of unemployment, vulnerable employment and working poverty with little signs of potential recovery in 2017, the International Labour Organization (ILO) reveals in a new study.

The ILO’s World Employment and Social Outlook (2016), Trends for Youth report shows that as a result, the global number of unemployed youth is set to rise by half a million this year to reach 71 million (table 1) – the first such increase in 3 years.

With a youth population that is expected to double, to over 830 million, by 2050 in the whole continent, the incidence of unemployment among youth in Northern Africa remains elevated at 29.3 per cent in 2016, representing the second highest rate across all regions.


The research discloses that the youth unemployment rate in sub-Saharan Africa is expected to continue on its downward trajectory, which began in 2012, reaching 10.9 per cent in 2016 and decreasing slightly to 10.8 in the following year. However, the unemployment outlook for youth in major countries of the region remains quite mixed. In South Africa, more than half of all active youth are expected to remain unemployed in 2016, representing the highest youth unemployment rate in the region.

Moreover, while the youth labour force participation rate is the highest in Sub-Saharan Africa at 54.2 per cent, the region’s enrolment rates in secondary and tertiary education is the lowest among all regions.

Working poverty and quality of employment

Working poverty rates among youth in Sub-Saharan Africa is nearly 70 per cent in 2016, translating to 64.4 million working youth in that region living in extreme or moderate poverty (less than $3.10 per day). The region continues to report the highest youth working poverty rates globally. The number of poor working youth has increased by as much as 80 per cent for the past 25 years. This is coupled with the fact that young workers in the region have one of the highest probabilities of living in poverty in comparison to adults.


Almost one in every four working youth in the North African region is estimated to be living in extreme or moderate poverty in 2016. Since 2012 there have been virtually no signs of a reduction in this rate, although the gap between youth and adult working poverty rates remains relatively slight.

Migration out of Africa

Youth in Africa demonstrate higher willingness to move permanently to another country: 38 per cent in sub-Saharan Africa and 35 per cent in Northern Africa in 2015 (globally the figures stands at 20 per cent). For instance, among sub-Saharan African countries, the percentage of youth willing to migrate ranges from 77 per cent in Sierra Leone to 11 per cent in Madagascar.

According to the ILO, the fundamental challenge in emerging and developing countries therefore remains to improve the quality of work available for the majority of young people who are already working but are underemployed or engaged in informal jobs. 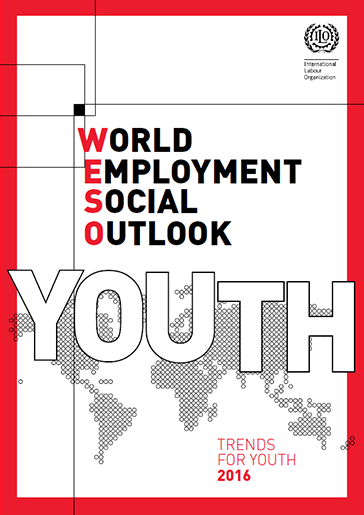 The Global Initiative on Decent Jobs for Youth
Skip to top