ADDIS ABABA (ILO News) – With more than 5.2 million domestic workers in Africa, extending social protection is crucial in the fight against poverty and the promotion of gender equality, says a new ILO report which assesses social security coverage for all regions.

60 million of the world’s 67 million domestic workers still do not have access to any kind of social security coverage, according to the new study entitled “Social protection for domestic workers: Key policy trends and statistics”.


In Africa, domestic work is a significant source of employment, accounting for 2.2 per cent of labour force. But there is more to the story: official figures are widely seen as an underestimate in a region where many say that “almost everyone has a domestic worker” and “even domestic workers in urban areas have domestic workers”.

“The vast majority of domestic workers are women, accounting for 80 per cent of all workers in the sector globally,” explained Isabel Ortiz, Director of the ILO Social Protection Department. “Most of their work is undervalued and unprotected, when domestic workers become old or injured, they are fired, without a pension or adequate income support. This can and must be redressed.”

In 2013, women domestic workers accounted for 74 per cent in Africa. Of all female paid employees in Africa, 13.6 % are domestic workers. Most African domestic workers, working in cities and towns are internal migrants–they are not from other countries, but come from rural, often less developed and poorer areas within their own countries.

In Africa, 85% of domestic workers are covered in part by the general labour laws and in part by subordinate regulations or specific labour laws. The challenge is the effective enforcement of the legal framework.

Unfortunately, the regions with the largest number of countries without coverage – and which are less likely to ratify international conventions – are Africa, Asia and the Middle East, deplores the ILO.

According to ILO estimates (ILO, 2015a), there are also about 11.5 million migrant domestic workers, and it is possible to identify some general trends on migration flows. In Africa, they seek employment in other regions, including North America, Europe and the Middle East.

There are some noteworthy programmes in South Africa, where domestic workers were incorporated in the Unemployment Insurance Fund (UIF) in 2003. There are approximately one million women employed as domestic workers in South Africa. The official labour market study found that at national level, the vast majority of employed youth have either semi-skilled (53.1% in 2015) or low-skilled occupations (29.2%).

However, differentiated requirements for access to some contingencies also exist in South Africa, where domestic workers must work at least 24 hours per month to receive sickness benefits.

In Morocco, the bill on the employment conditions of domestic workers was adopted by the House of Councillors plenary on 27 January 2015.

In Zambia, national surveys on the “Magnitude of Domestic Workers in Zambia” and the “Patterns of Employment Arrangements and Working Conditions in Domestic Work in Zambia” were conducted to ascertain whether domestic work was gender-responsive, and to examine the issues of maternity protection, work–life balance, and gender stereotypes within different kinds of domestic work.

In Senegal, the Labour Code’s provisions on certain issues apply to domestic workers, such as contracts, leave or pay slips, while the general conditions of employment are set out in the Decree issued by the Ministry of Labour.

In Tanzania an advocacy campaign is under way to promote awareness and knowledge of domestic workers’ rights and the training of trade unionists, with inputs from gender specialists.

The lines between “helping in the house of a relative” and working as an employee may be blurred and ambiguous.
And because of the uniquely vulnerable situation of domestic workers, mandatory coverage will not be effective alone. Strategies should include – among other measures − fiscal incentives, registration plans, awareness-raising campaigns targeting domestic workers and their employers as well as service voucher mechanisms.

Domestic work should also be integrated into broader policies aimed at reducing informal work. Coverage of domestic workers by social security schemes is feasible and affordable, including in lower middle and low-income countries, as evidence from Mali and Senegal clearly demonstrates, concluded the ILO report.

Domestic work is considered as a sector that is difficult to cover, partly because work is performed in private households and frequently for more than one employer. The occupation is also characterized by high job turnover, frequent in-kind payments, irregular wages and a lack of formal work contracts. 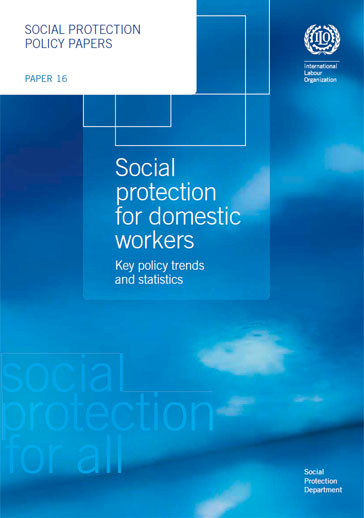 Who are domestic workers ?