Dakar (ILO News) – In the context of increasing concern about unemployment, especially among youth, and growing interest for promoting the mobility of workers within the ECOWAS region, the International Labour Organization (ILO), in collaboration with Economic Community of West African States (ECOWAS) and Senegal’s National Agency for Youth Employment (ANPEJ) held a technical workshop on strengthening public employment services in ECOWAS Member States in Dakar, Senegal from February 8-9th, 2016.

The workshop which brought together representatives from public employment services, employers’ organizations, trade unions, and private recruitment agencies from across the ECOWAS region and Mauritania was organized under the auspices of Free Movement of Persons and Migration in West Africa (FMM West Africa) Project, funded by the European Union. With the support of technical experts from the ILO and France’s Pôle Emploi, participants discussed strategies and tools for providing effective job placement services and information sharing about the labour market within the region.

Already, several West African countries have piloted the use of a job matching database known as Job Gateway (Accueil Emploi in French) to connect jobseekers with national and international employment offers. The database, first developed by the ILO, has been installed and is currently in use in six countries of the region, namely, Benin, Cape Verde, Ghana, Mali, Mauritania, and Senegal.

Speaking at the technical workshop, the Director of ILO Decent Work Team, Dakar, Mr. François Murangira reviewed the ILO-ECOWAS collaboration saying “I would recall that with ILO support, ECOWAS adopted a regional labor and employment policy in 2009, the regional action plan on youth employment in 2012 and regional action plan against child labor in 2012. ECOWAS has also developed tools to facilitate the free movement of ECOWAS citizens including workers, a key component of economic integration in the region”.

He stated that the ILO will continue to work with ECOWAS to ensure the implementation of the strategies adopted at the 13th ILO African Regional Meeting in Addis Ababa in December 2015 by African tripartite constituents (governments, workers and employers) which included among others creation of decent jobs for all, especially for youth, women and the disabled.

In her address, the Commissioner of Social Affairs and Gender, Dr Fatimata Dia Sow stated that ECOWAS would continue to develop regional mechanisms that facilitate and enhance social integration of its citizens. She stated that the ECOWAS policy on Labour and Employment and its action plan which was adopted in 2009 was the basis of all its activities on employment issues.

According to the Commissioner, effective public employment services in the region can play a key role in improving the mobility of the workforce and improve the results of the general labour market.

In his speech, the Senegalese’ Minister in charge of Youth, Employment and Citizenship Construction, Mr Mame Mbaye Niang highlighted the dearth of statistical data on the labour market as a major factor that limit the development of a solid job matching database. He further emphasized that an effective coordination of public employment services at sub regional level can play a crucial role in economic integration of West African States. 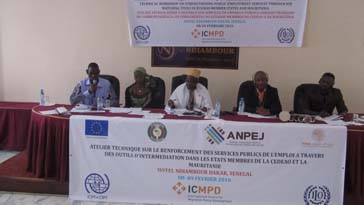