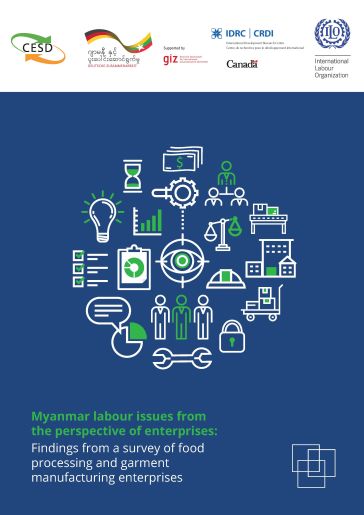 Download:
Looking at labour issues in Myanmar from the perspective of employers leads to various findings. Labour turnover rates are high and often worker-driven. Lack of skilled labour is viewed as a major obstacle by many enterprises but only few of them invest in human capital development. Industrial relations systems are in their infancy with workers associations present only in a minority of firms. Social dialogue is underdeveloped and industrial relations are not always peaceful. Almost a fifth of the surveyed enterprises reported that their workers went on at least one strike during the last three years, and a quarter of them had at least one demand for wage increases during the same period. Key documents such as employment contracts and payslips are used widely but not universally. Wages are low compared to other Asian countries but so are labour productivity levels. Still, there were indications that many enterprises would struggle to comply with the new minimum wage. In most enterprises, workers come in six days a week and, on average, work 10.4 hours of overtime per week. Finally, almost all enterprises are registered with the Social Security Board (SSB) but raised concerns about the quality and availability of SSB services to their employees. The study concludes with some suggestions for future policy directions.