The Seventh Summit of the Americas was held on April 10-11, 2015 at Panama City, Panama. The ILO General Director, Guy Ryder, attended the official activities of the Summit and other side events.

Heads of State and Governments discussed regional priorities in education, health, energy, environment, migration, security, citizen participation and democratic governance under the overall theme “Prosperity with Equality: Challenges to Cooperation in the Americas”. The importance of investing on people’s skills, the transition from school to work, and the adoption of labour migration policies are among the key priorities highlighted for education and migration policies in the region. The ILO was also called upon to support “programs to prevent and fight the smuggling of migrants and trafficking of persons”.

The Summit is the first in history that included representatives of the 35 independent countries of the Hemisphere, including Cuba. The participation of this country was considered historic.

The ILO Director-General, Guy Ryder warned that Latin American and Caribbean countries are facing challenging times because of an economic slowdown in the region which is having an impact on employment. This could, in turn, lead to a rise in unemployment and informality rates.

“After a decade of significant improvements, in which regional unemployment dropped to historic levels, we must brace ourselves for a rise in unemployment rates,” said Ryder.

The average urban unemployment rate in Latin America and the Caribbean stood at 11 percent a decade ago. It dropped to 6.1 per cent last year, but according to the latest ILO figures, it is expected to rise to at least 6.3 per cent in 2015.

Ryder took part in the Civil Society Forum, where he stressed the need to implement policies that would prevent a rise in unemployment and lead to what he called a “productive transformation.”

“We need to look for an economic growth model that generates more and better jobs for all,” he said.

Ryder also participated in the Foro Sindical de las Américas, which brought together unions from the region. He said that Latin America and the Caribbean will need to create 50 million jobs over the next decade to absorb young workers entering the labour market.

“When the economy is not working properly, this becomes very hard,” he said, adding that some may be forced to look for jobs in the informal economy, which already covers almost half of all workers in the region.

The ILO Director-General also attended the Second CEO Summit of the Americas where he stressed that transforming the growth model poses an important challenge for the private sector and called businesses for more decisive action to create quality jobs. 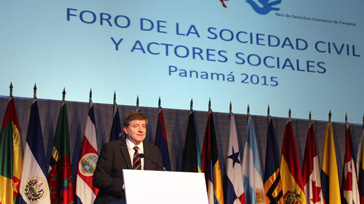