On the 23rd October 2018, the public seminar entitled ‘Cooperative Activities in French-Speaking Africa’ was held by ILO and the Japan Co-operative Alliance (JCA) at COOP Plaza in Shibuya. This seminar is a part of annual study tour for leaders from African cooperatives and is held on the last day of the tour every year. The participants of the tour explained situations in terms of cooperative movements in their own countries, what they learned in Japan and how they would use them after they get back to their countries.

This was the first time that this programme focused on Francophone African countries, and three cooperative leaders from Cameroon, Côte d'Ivoire and Tunisia took part in it. Thus, Japanese-French translation had been provided throughout the whole programme including the seminar. This was also a valuable opportunity for Japanese people to be able to learn their home countries’ status quo, challenges they are facing and unique characteristics of their cooperative activities.

More than 50 people, including three ambassadors from participants’ countries as well as people related to Africa and cooperative organisations, participated in the seminar, which made the venue full house. Mr. Eiichi HONDA, President of Japan Consumers’ Cooperative Union (JCCU), made opening remarks and mentioned that they added visits concerning environmental issues this year which had been requested by previous participants.

Mr. Guy TCHAMI, Cooperative Policy and Research Specialist, ILO Cooperatives Unit, sent a video message in which he showed his appreciation to people involved in this programme and his message to the participants. He also referred that JCCU staff participated in an international conference on coop to coop trade in Geneva, this June, as a result of this programme. After that, the Ambassadors from participants’ countries delivered speeches. They appreciated that this year’s programme deliberately selected the participants from Francophone countries, and mentioned “Kaizen”, a significant Japanese business concept, which they would like to disseminate back home. One of them requested for the programme organizers to implement a study tour in Africa for Japanese cooperators in order to increase exchanges and technical transfer. Following that, Mr. Haruyoshi AMANO, Manager of International Department, JCCU, explained about the study tour programme and its aim for African cooperators to learn about the diversity of Japanese cooperative movement such as multipurpose cooperatives. 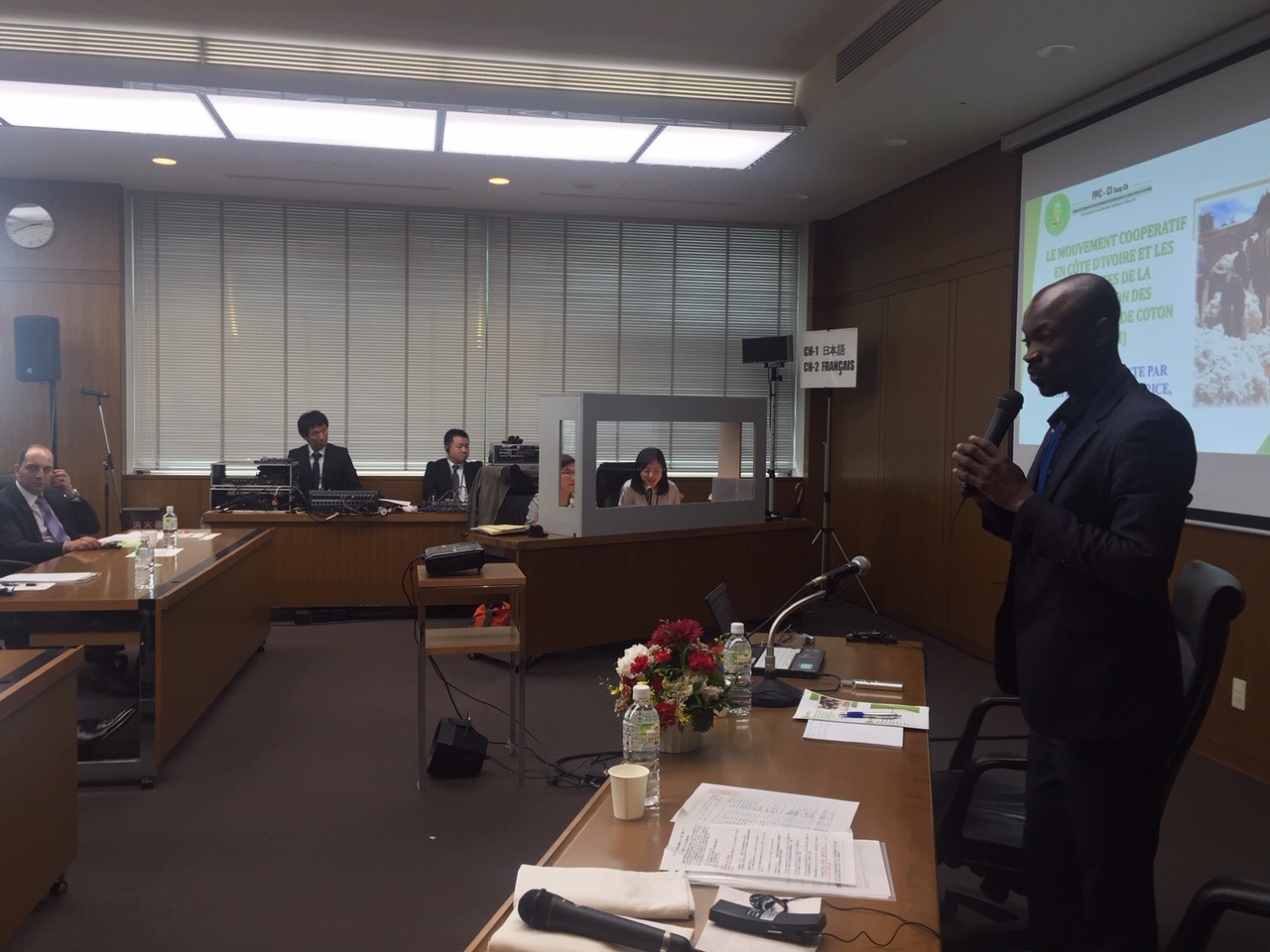 The participants made presentations regarding overviews of cooperative activities in each country.  Mr. Kobenan Maurice KOFFI from Côte d'Ivoire presented first. He illustrated the Ivorian concept and legal framework of cooperatives as well as the organizational structure, activities and future prospects of his own cooperative (FPC-CI) in cotton sector. The FPC-CI helps members by supplying inputs of production and purchasing equipment collectively, conducts capacity building including education for members, and uses statistical data of its members to improve their activities. For the future, his cooperative are planning to develop projects favorable to producers. Also, it is planning to cultivate associated crops for diversification of activities and improvement of producers’ income. According to him, due to a nature of cotton, unlike cacao, it is hard for individual farmers to cultivate, produce and sell a certain amount of cotton by themselves and, therefore, the role cooperatives play is prominent and the participation rate of cooperatives reaches 98%. 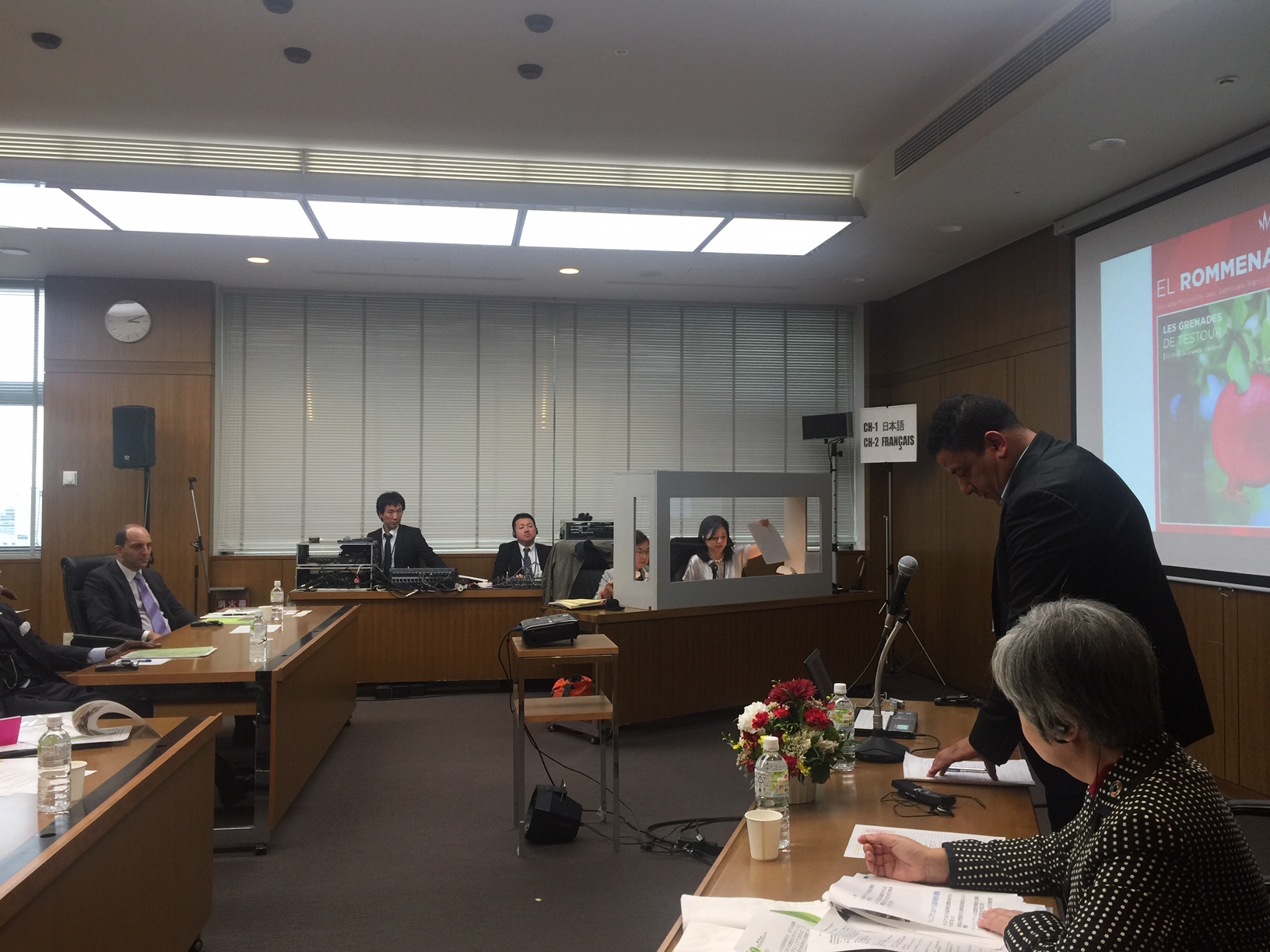 Next, Mr. Radhouan CHOUIHI, Tunisian cooperative leader, gave a presentation. He explained history of cooperative movements in Tunisia, status quo of his pomegranate production cooperative (SMSA el Rommena) which has just established this year. He also referred to related activities such as labelling for quality assurance based on Protected Designation of Origin (PDO), providing agricultural facilities and displaying pomegranate produce at an exhibition to start export. He told that, although many people think pomegranates are sour, Tunisian pomegranates are very sweet and big and so that those who try them tend to be surprised. Thus, he argued that he would like people to try them once. 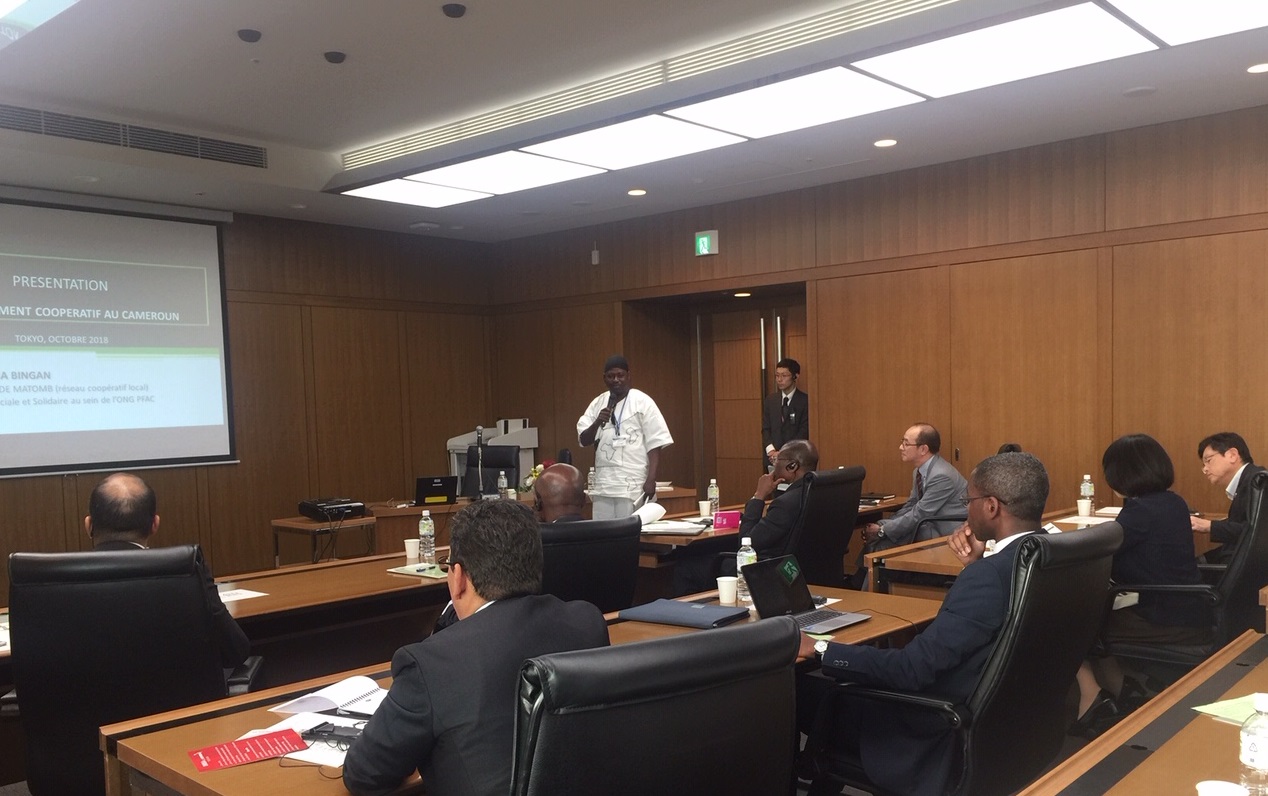 The last presentation was delivered by Mr. Joseph Alain YEBGA BINGAN from Cameroon. He illustrated the history of Cameroonian cooperative movements such as that state-led cooperative introduction has failed because of its operation without active participation of producers in decision-making and controlling cooperatives, and he emphasised the importance of autonomous participation. He identified that OHADA uniform act which was set in 2010 in African region played a prominent role. After the withdrawal of the state, the act successfully broke the previous practice of cooperatives by being subject cooperatives to the community legislation. As a consequence, it promoted the interests of members and sustainability of the cooperatives. Also, he argued the importance of setting up cooperative networks at the community level like his own organization “RELESS of Matomb”, supporting young people and achieving ‘social solidarity economy’ which emphasises social aspects instead of only market economy.

In the following heated Q&A session, there were questions for the participants concerning what they learned in Japan and how to use them in their own countries, a suggestion of collaboration with other organisations and a request for provision of training in sales and marketing fields. The Cameroonian Ambassador repeatedly requested JCCU to carry out a study tour programme for Japanese farmers and cooperators to visit Africa and JCCU responded to try its utmost to make it happen. The seminar brought about a positive exchange of ideas for strengthening their cooperation in the future. As a result of this study tour and seminar, it is expected that exchange and information sharing will be promoted further among ILO, JCCU, JCA and cooperatives in participated African countries.