Download:
Agriculture is one of the most hazardous of all economic sectors and many agricultural workers suffer occupational accidents and ill health each year. It is also the largest sector for female employment in many countries, especially in Africa and Asia. Agriculture employs some one billion workers worldwide, or more than a third of the world's labour force, and accounts for approximately 70 per cent of child labour worldwide.

This code of practice is devoted to improving OSH in agriculture and complements the Safety and Health in Agriculture Convention 2001 (No. 184), and its supplementing Recommendation (No. 192), and provides further guidance for their application in practice. It provides guidance on appropriate strategies to address the range of OSH risks encountered in agriculture in order to prevent – as far as is reasonably possible – accidents and diseases for all those engaged in this sector. It also provides guidance on the roles of the competent authorities, employers, workers and their organizations in promoting OSH within this sector. Its provisions are based on principles contained in Convention No. 184 and many other ILO Conventions and Recommendations.

Importantly, OSH standards affecting women workers have been traditionally underestimated because these standards and exposure limits to hazardous substances are based on male populations and laboratory tests. Since the majority of agricultural workers are women, this code takes into consideration the gender dimensions of OSH in agriculture. This is a positive development which more closely reflects the reality of the sector.

The code was adopted by an international group of experts meeting in Geneva from 25 to 29 October 2010. It was endorsed and approved for publication by the Governing Body of the ILO at its 310th Session (March 2011).

C184 Safety and Health in Agriculture Convention, 2001 R192 Safety and Health in Agriculture Recommendation, 2001 Guidelines for labour inspection in forestry [pdf 268KB] Guidelines on occupational safety and health management systems, ILO-OSH 2001 [pdf 292KB] HIV/AIDS and the world of work Ambient factors in the workplace [pdf 573KB] Safety and health in forestry work [pdf 1275KB] Technical and ethical guidelines for workers' health surveillance [pdf 672KB] Protection of workers’ personal data [pdf 340KB] Recording and notification of occupational accidents and diseases [pdf 469KB] Management of alcohol- and drug-related issues in the workplace [pdf 488KB] Safety in the use of chemicals at work [pdf 533KB] Safety, health and working conditions in the transfer of technology to developing countries [pdf 1083KB] Safety in the use of asbestos [pdf 1067KB] Guide to health and hygiene in agricultural work [pdf 36563KB] Protection of workers against noise and vibration in the working environment [pdf 1949KB]

Occupational safety and health in agriculture, on plantations, and in other rural sectors 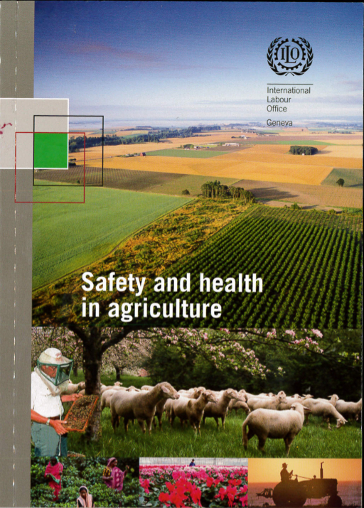 Encyclopaedia of Occupational Health and Safety Safety and health in agriculture: A set of fact-sheets [pdf 1730KB]

Tackling hazardous child labour in agriculture: Guidance on policy and practice [pdf 2299KB] Health, safety and environment: A series of trade union education manuals for agricultural workers [pdf 1609KB] Safety and health in the use of agrochemicals: A guide [pdf 3615KB]