The International Labour Organization’s (ILO) mandate encompasses equality and non-discrimination in the world of work. This means promoting diverse workplaces where all working women and men are equally respected and have equal opportunities for advancement. Lesbian, gay, bisexual and transgender (LGBT) workers are equally entitled to the right to be free from discrimination at work.

Moreover, it is becoming increasingly evident that promoting diversity makes business sense. Like all forms of discriminatory behaviour, prejudice based on sexual orientation or gender identity can impede the recruitment or promotion of the best candidate for the job. A diverse workforce also brings with it different ideas and ways of doing things that can propel innovation and enhance profitability; and in an era of globalization where markets more often than not extend across borders, diverse workforces can be better mirrors of target markets.

It comes as no surprise therefore that many of the world’s biggest and most successful companies have advanced diversity strategies, including in respect of LGBT. Indeed nearly 90 per cent of Fortune 500 companies prohibit discrimination based on sexual orientation and gender identity and almost 60 per cent of them extend benefits to the same-sex partners of their employees.

More and more countries are moving toward adopting laws prohibiting discrimination based on sexual orientation and/or gender identity in the workplace and elsewhere. Even when not specifically related to the workplace, there may be world of work implications of such measures that need to be addressed – for example the extension of social protection in the case of same-sex marriage or civil partnerships.

Despite undoubted progress, the ILO marks the International Day against Homophobia and Transphobia with the clear understanding that there is still much to do. The Organization is committed to promoting workplaces where LGBT workers are accepted and can work without fear of stigma, discrimination, harassment or violence – decent work means respecting the rights of all. 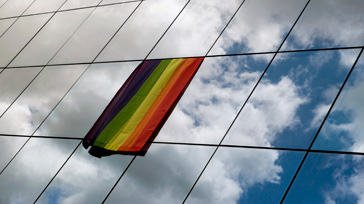