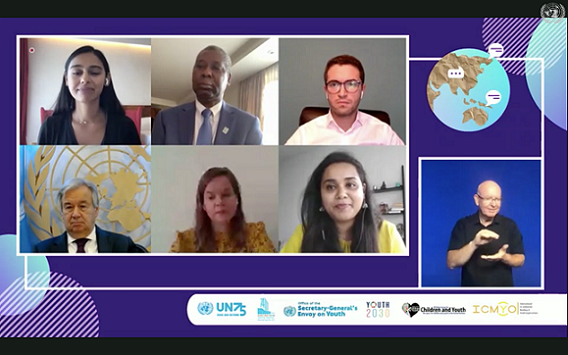 On 9 September, the President of the General Assembly, H.E. Mr. Tijjani Muhammad-Bande, and the President of ECOSOC, H.E. Munir Akram, convened the UN75 Virtual Youth Plenary. The meeting, mandated by UN resolution 73/299 on the commemoration of the 75th anniversary of the UN, convened youth participants from all over the world to a dynamic and interactive dialogue with the UN system and other stakeholders under the theme “The Future We Want, The UN We Need: The Future of Multilateralism”.

In the opening of the plenary, the Secretary-General, H.E. António Guterres, underscored the need for strong multilateral organizations and global governance, and highlighted that youth were at the front lines, championing gender equality, climate action and anti-racism. The Secretary-General’s Envoy on Youth, Ms. Jayathma Wickramanayake called for increased youth delegates to the UN and wished to see more young parliamentarians in order to bring youth’s ideas to the multilateral world. The live poll during the plenary indicated that 41% agree that the UN effectively represents youth, while 59% disagreed. The Secretary-General highlighted that the UN’s structure did not always meet the challenges of the present time and emphasized that institutional mechanisms must be created to allow youth engagement within the organizational structures of multilateral organizations. Mr. Adil Skalli, member of the Youth Advisory Council of the World Federation of UN Associations, from Morocco, and Ms. Maria Corina Muskus Toro, Co-Founder and Director of Venezolanas Globales, from Venezuela, stated that, while progress had been made, further efforts were needed to restore trust in public institutions, ensure inclusive decision making, integrate the voices of the most marginalized and empower youth to implement the changes that are needed to achieve the 2030 Agenda for Sustainable Development.

🗣️Your voice matters,
💭Your ideas matter.
Now — more than ever,

Tune in to watch the #UN75 Youth Plenary and share your vision for the future you want and the UN you need: https://t.co/YjWHg0otxF pic.twitter.com/j2yAbdktQc

The plenary also highlighted that the socio-economic effects of COVID-19 have had a disproportionate impact on youth. According to recent ILO data, 65 per cent of young people reported having learned less since the beginning of the pandemic due to the transition to online and distance learning. The global digital divide has exacerbated inequalities and made online learning particularly difficult in developing countries; as the ILO data shows, while 65 per cent of youth in high-income countries are taught classes via video-lectures only 18 per cent in low-income countries were able to keep studying online. Further, one in six youth had to stop working since the onset of the pandemic, especially younger youth and those working in clerical support, services, sales and crafts. Targeted policy responses are needed to overcome youth unemployment. In addition to overcoming the digital divide, the youth speakers underscored the importance of effective fiscal response to COVID-19 and noted that this was challenging in many regions due to lack of government resources, infrastructure and capacities to manage effective responses. System-wide transformative change is needed to respond to COVID-19 and building a better future of work, particularly for young people, while also ensuring environmental sustainability, equality, social justice and fairness.

As the UN commemorates its 75th anniversary, it is more important than ever before for the UN to listen to the people it serves. Under-Secretary-General and Special Advisor to the Secretary-General on the UN 75th anniversary, Mr. Fabrizio Hochschild Drummond, had conducted a global consultation on people’s key priorities and concerns. Despite seemingly polarized views on social media, young people have much in common on their aspirations and views for the future. Youth want the UN to better address inequalities, support improved access to basic services, provide more support to hardest hit areas, and invest more in youth and education. Health care is also a major concern. However, the main priority for youth is climate action and protection of the environment. Youth also call for better social protection, particularly for the most vulnerable, and a fairer global economy with the inclusion of youth in decision makings at all levels. During the plenary, Ms. Tobilaba Ajayi, a disability rights advocate in Nigeria, also underscored the need for inclusion of a diverse set of youth, including those with disabilities.

The UN75 Youth Plenary’s outcome and summary will be presented at the high-level meeting of the General Assembly on the 75th anniversary of the UN, on 21 September. Beyond the interactive dialogue, the plenary included artistic performances, poems and songs, highlighting youth’s creative approaches and reflecting diverse perspectives. Both the ILO and the UN, particularly through the Global Initiative on Decent Jobs for Youth, remain committed to strengthening the rights and voices of young people, ensuring diverse youth representation, welcoming youth participation in relevant processes and high-level meetings, and supporting policies that empower youth.