The International Organisation of Employers (IOE) Centenary Summit convened the International Labour Organization (ILO) Director-General, Mr. Guy Ryder, the Secretary-General of the UN, Mr. António Guterres, the General-Secretary of the International Trade Union Confederation (ITUC), Ms. Sharan Burrow, and other key leaders to commemorate the 100 year anniversary of the organization. In his opening remarks, Mr. Erol Kiresepi, President of IOE, launched the IOE Centenary Manifesto, reflecting on IOE’s long-standing history and making a clear vision for an enabling business environment and a strong cooperation between businesses, governments and the UN system. As the world is more interconnected than ever before, and given the global socio-economic challenge posed by COVID-19, global cooperation with business is more important than ever before. 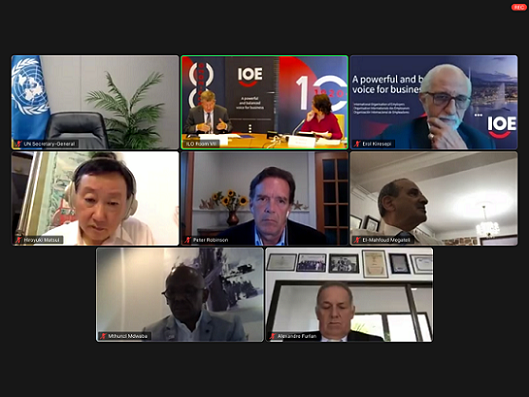 The Summit included video messages and a live virtual dialogue with IOE’s 5 Regional Vice-Presidents, representing Latin America, Asia, Europe and Central Asia, Africa and North America. The Regional Vice-Presidents underscored that collaboration between the UN and businesses could accelerate action towards achieving the Sustainable Development Goals (SDGs) and ensure a foundation for sustainable and inclusive economic recovery. In an era where globalization and trade is being undermined, multilateralism and collective, coordinated efforts are imperative to building back better. 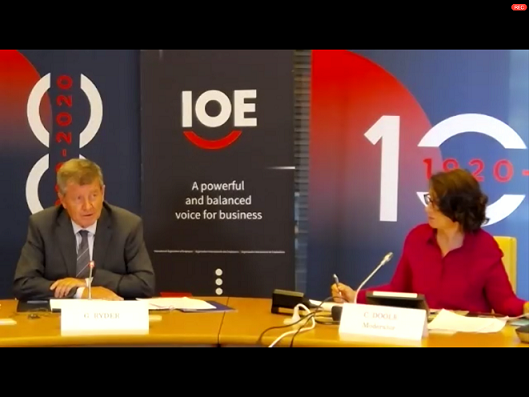 The Director-General of the ILO, Mr. Guy Ryder, highlighted the IOE’s great contribution to the world of work over the past 100 years and underscored that it would be impossible to imagine the ILO without the participation and effective representation that the IOE has coordinated. The value of employers’ commitment to the ILO has continued throughout history, and it must continue be considered and renewed. In most countries, employer communities engage actively in social dialogue and tripartite cooperation. The future requires employers to remain committed to working with labour and jointly finding fair and practical solutions. It also demands a firm appreciation and effective use of multilateral space. The IOE, in collaboration with worker and government representatives, can contribute to overcoming transformative changes that the world is facing, including technological change, climate change and demographic shifts, as well as COVID-19, by making conscious policy decisions and supporting tripartite solutions for the future.

SG @antonioguterres voiced strong support for social dialogue during the @ioevoice Centenary Summit and made a clear call for inclusion of employer organizations and trade unions in multilateral institutions 🇺🇳🌎🌏🌍 #IOE100 #socialdialogue pic.twitter.com/f7TjwXWw0G


The Secretary-General of the UN, Mr. António Guterres, pointed out that IOE had been one of the first business organizations to engage directly in the multilateral system, and it had been an important pillar of the ILO. IOE’s support for the global vision of sustainable development was appreciated, and the Secretary-General emphasized that private sector involvement was essential in the efforts to build more inclusive and sustainable economies and societies, in line with the 2030 Agenda for Sustainable Development and the Paris Agreement. He encouraged the IOE to continue to engage with multilateral organizations to create a conducive environment for decent work, investments and sustainability. It was also important to work with the UN on the ground, and the recent UN reform would lead to more engagement with the private sector at the national level. Further, Mr. Guterres underscored that the UN Guiding Principles on Business and Human Rights and the ILO’s tripartite function were key to responsible business conduct. Business and employers organizations have to participate in national and global public-private dialogues and initiatives, and get the space to do so. The world needs innovation and creativity, and it requires investments in businesses, jobs and people. It is important to build trust in business by doing right, for both workplaces and communities. Mr. Guterres further underlined the urgent need for the business community to assume more leadership in the world and join multilateral organizations through institutional spaces to participate in decision-making.

The IOE Centenary Summit included an interactive dialogue between Mr. Guterres and Mr. Mthunzi Mdwaba, IOE Vice-President to the ILO, Ms. Sangita Reddy, President, Federation of Indian Chambers of Commerce and Industry, and Ms. Michele Parmelee, Deputy CEO, Chief People Officer, Deloitte Global and Vice-Chair of United States Council for International Business, moderated by Mr. Roberto Suárez-Santos, Secretary-General, IOE. The discussion included a call for increased attention to MSMEs, as they generate 7 out of 10 jobs, and strengthened partnerships with the UN to support the informal sector and women-led businesses. Mr. Guterres stated that international institutions had to increase their focus on informality, and public-private partnerships at the national level were needed to integrate informal workers into the formal economy. Innovation in social protection systems were also encouraged. The dialogue further highlighted key concerns regarding the digital divide and stressed the importance of investing in safe education and promoting lifelong learning that can facilitate workers’ adaptation to labour market needs. Mr. Guterres also suggested revisiting payroll tax systems and implementing carbon tax to advance climate action while also lowering labour costs.

The Summit’s second interactive, multi-stakeholder dialogue convened Ms. Sharan Burrow, General-Secretary, ITUC, Mr. Siddharth Chatterjee, UN Resident Coordinator, Kenya, Ms. Sanda Ojiambo, Executive Director, UN Global Compact, and Mr. Suárez-Santos. Representing the ILO’s social partners, ITUC and IOE remain critical to advancing decent work by amplifying the voices of workers and employers respectively. As the UN reform has increased UN system-wide collaboration and encouraged broader partnerships on the ground, the IOE, as well as ITUC, must continue its central role. The IOE’s 100-year long history indicates the strong resilience of multilateral and public-private cooperation, and the voice of business is as needed as ever before. Decent work, thriving business and a fair society that works for all can only be achieved when governments, policy makers and decision makers work in close collaboration with businesses to implement effective policies and practical solutions, building on the aspirations of the SDGs.