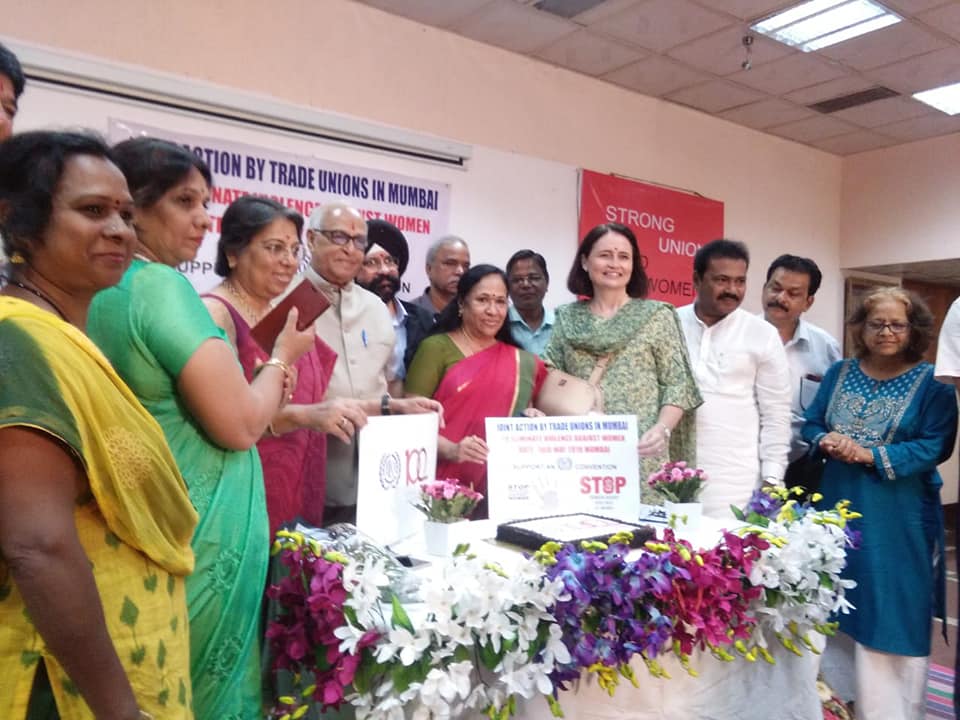 Good morning and namaskar!
Let me begin by congratulating the Transport and Dock Union, affiliated to the central trade union - Hind Mazdoor Sabha, for its 65th foundation day and the intention to conduct a programme for women workers. The focus on fundamental rights for equality, dignity, safety, health and welfare of working women in the current Indian economic context is commendable and highly relevant for India’s development in all respects. It is indeed, a pleasure for me to be here amidst you to address the conference.

The ILO 2018 Report titled 'World Employment Social Outlook -Trends for women' –looks at challenges women face globally. It talks of the wide gender gap in labour force participation. While this rate globally stands at 50%, in India, the female labour force participation has been declining. It is now below 30%. Women are also more likely to be unemployed than men in large parts of the world. And that women who are employed often tend to be overrepresented in vulnerable employment — this situation is more severe in developing countries. Informalization has been on the rise and as the world moves towards prosperity, since decades women have been getting an unequal share of this prosperity. This must change.

The ILO relentlessly works with its tripartite constituents — government, workers’ and employers‘organizations— to promote social justice in the world of work. It has been working with HMS and the other unions at the national level, and at the state level —focussing on women workers.

This is the 100th year of the ILO. ILO was founded in 1919 and India is a founding member of the ILO. The world of work is undergoing many changes. Leading up to the centenary, the DG of ILO launched several initiatives on the future of work. One of them, is the Women at Work Initiative. ILO goes beyond business as usual — it tries to measure as to why progress on delivering decent work for women has been so slow and what must be done towards securing a better future for women at work. We look at discrimination, including stereotypes, that undermine access to decent work, the intrinsic linkages of low pay and quality of employment, absence of equal pay, lack of recognition, unequal distribution and undervaluation of care work as well as violence and harassment.

The ILO Director-General, during the 2018 International Labour Conference, spoke of a renewed push for gender equality and called attention to five building blocks to secure a decent future.

The first building block proposes a high road to a new care economy. Often, women’s participation in the labour market is perceived to be “supplementary” to their otherwise primary roles as spouses, mothers, and care givers. This bias influences the general perception of women in the workforce and negatively impacts their role in the world of work. A transformative approach is required — allowing both women and men to be workers, parents and carer-providers. This should be deeply embedded in our workplace policies. I encourage you to reflect on how to address the “care challenge” in the Indian context.

The second building block speaks of strengthening women’s control over their time. Workers in the unorganized sector do not hold influence over scheduling their hours, which results in irregularity and unpredictability, affecting their physical and mental health, and jeopardizing work-life balance. Existing ILO Conventions provide guidance on how to schedule working time, part time work and cater to those workers who have family responsibilities. I would urge you to reflect on the issue of autonomy and control over your time as this directly links to safety and health of the workers.

And the third building block focuses on valuing women’s work fairly. Let’s try to make the unpaid care work visible in statistics and spotlight how care work contributes to the country’s economy. Then comes addressing the gender pay gap — here employers and trade unions and government must work even more collectively. I would also urge you to look at the recently published India Wage Report, 2018 which talks of wage disparities – especially the gender wage gap.

The fourth building block says raise the voice and representation of women. I thank all the national and other unions for reaching out to women, especially workers in the unorganized sector, empowering them to raise their voice and be heard, talking about why freedom of association and collective bargaining matters and should be accessible.

In India, the ILO works both with employers and workers organizations for greater women representation in leadership positions.

The last and a very important building block addresses ending violence and harassment. This is also one of the themes of this workshop, where it is being taken up collectively by the unions in Mumbai. Violence against women and girls, both at home and at the workplace, is even today a modern-day reality. It has long-lasting negative impacts on women and compromises the principles of equality, dignity, safety, health and welfare at work and in society. India has been witnessing a churning with the Me Too movement — as we witness how this impacts women at workplaces – the ILO is aimed at setting the first international rules to end sexual and other types of harassment at work.

The ILO Constituents want to step up. We are, now, in the process of moving towards this new ILO convention to combat violence and harassment in the world of work to be discussed at the ILC, June 2019. Your voice, your work is critical in ensuring we get this right.

The world of work is fast-transforming — bringing new opportunities and challenges. The positive trend is that the trade union movement is adapting to these changes. In the context of India, your efforts in mobilizing workers in the unorganized sector has contributed to the growth of memberships within the unions. This is significant. You should be proud of this achievement. Now is the time for you to come up with innovative strategies to reach out to the youth and the new entrants of the work force.

One of the most significant issue that hinders our progress to social justice is child labour. We have to continue to protect our children from abuse and forced labour, they are the future and they should be in schools.

The ILO New Delhi office, in collaboration with the tripartite constituents is working under the framework of the Decent Work Country Programme 2018-22. I would like to acknowledge the support of the government, employers’ organizations and trade unions in the implementation of our DWCP programme.

I will end by saying “Where trade unions are most firmly organized, there the rights of the people are most respected”.

I wish you success and a productive day ahead.

Thank you for your attention.