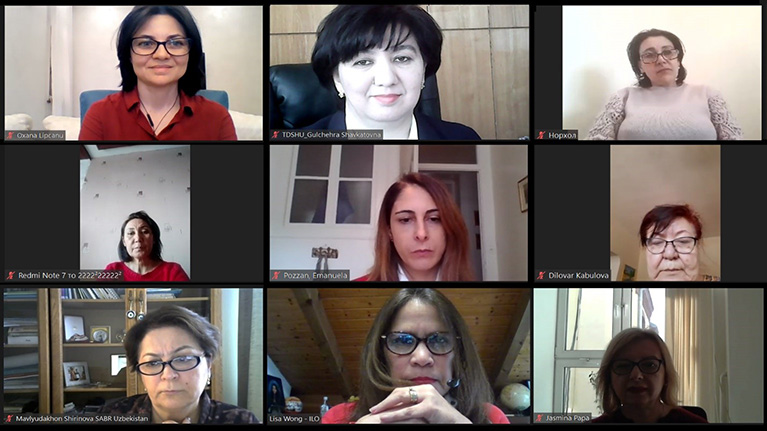 Tashkent, Uzbekistan (ILO News) – The webinar brought together members of the National Commission on Gender Equality of the Republic of Uzbekistan, specialists of other state agencies and representatives of civil society organisations working on gender issues.

In her opening statement Ms Gulchehra Rikhsieva, member of the National Commission on Gender Equality of the Republic of Uzbekistan, spoke about the presidential decree “On measures to further strengthen guarantees of labour rights and support women’s entrepreneurial activity” (2019) as an important step to ensure gender equality in labour relations in Uzbekistan. The National Commission was established according to this decree, to address the following issues: ending professional segregation, closing the gender pay gap, enhancing the share of women in the structure of economically active population, adapting international norms and standards focusing on ending all forms of discrimination against women in the national legislation.  Ms Rikhsieva welcomed the webinar series organised by ILO play as an important tool to improve the knowledge of national experts on gender equality.

It was noted that Uzbekistan has ratified all eight ILO Fundamental Conventions and five technical Conventions, including the Maternity Protection Convention (Revised), 1952 (No103). In addition, the Employment Policy Convention, 1964 (No. 122) has been designated as a priority for implementation. The country has also ratified a set of international human rights instruments pertaining to the rights of women: International Covenant on Economic, Social and Cultural Rights (1995); Convention on the Elimination of All Forms of Discrimination Against Women (1995) (CEDAW) and Convention on the Rights of Child (1994).

Ms Emanuela Pozzan, ILO Senior Gender Equality and Non-Discrimination Specialist, explained socio-cultural factors that shape inequality in the labour market and methods to assess the gender pay gap. She gave an overview of policies around the world that address this problem. In her presentation, practices both from the developed and developing countries were presented.

Ms Lisa Wong, ILO expert on Discrimination in Labour Relations, devoted her presentation to the ILO Convention No. 100 on Equal Remuneration Convention (1951). She also touched upon the concept and the methods of the gender-neutral job evaluation6 as well as the Equal Pay International Coalition's (EPIC) activity.

Gender-neutral job evaluation evoked particular interest in the audiencee. Ms Mavlyudakhon Shirinova, asked if ILO could support the government of Uzbekistan in conducting this kind of research. She also mentioned the possibility of Uzbekistan to join the EPIC initiative.

In closing the webinar, Ms Jasmina Papa, Social Protection Specialist of the ILO Office for Eastern Europe and Central Asia, highlighted ILO’s readiness to work closely with Uzbekistan’s constituents not only by providing practical support and technical assistance for the evaluation process but also by supporting law-making in the gender sphere. She also welcomed the interest of the participants to join the EPIC initiative, because thus Uzbekistan will be able to  learn other member countries' policies on closing the gender pay gap.
The next webinar in the series will be held at the beginning of April to l discuss maternity protection issues.