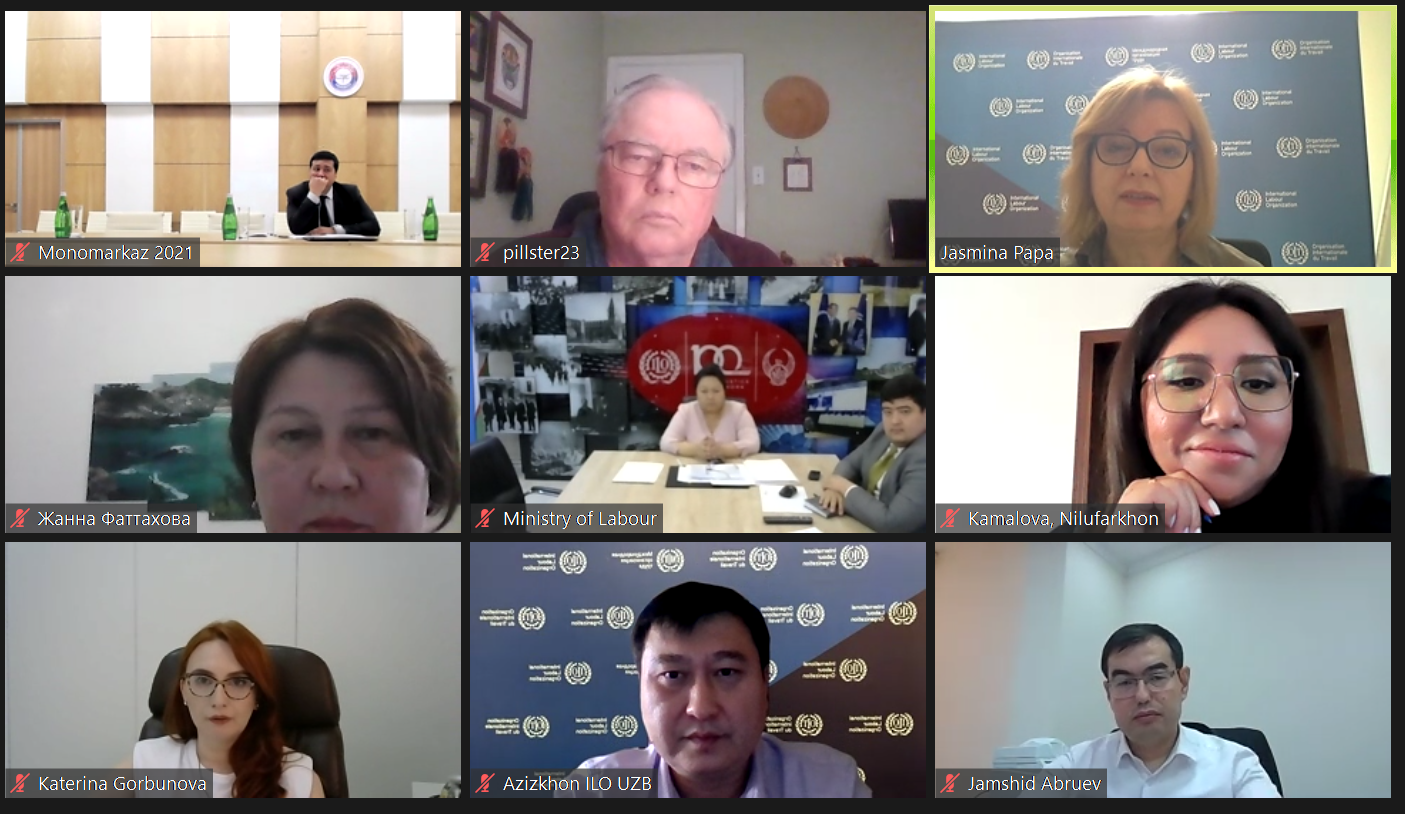 Tashkent, Uzbekistan (ILO News) – The event was attended by the representatives of the Ministry of Finance of the Republic of Uzbekistan, the Ministry of Employment and Labour Relations, the Pension Fund, and specialists of ILO, UNICEF, and UNDP.

In the opening remarks, Mr Jamshid Abruev, the Deputy Minister of Finance and Mr Erkin Mukhitdinov, the First Deputy Minister of Employment and Labour Relations, updated participants on the progress in drafting social protection and employment policies as well as about on-going interventions to ensure income security and access to employment.

Ms Jasmina Papa, Social Protection Specialist of ILO Office for Eastern Europe and Central Asia, agreed with Mr Mukhitdinov on the importance of synergies of active labour market and social protection strategies and expressed ILO’s readiness to support Uzbekistan’s constituents in adopting international labour standards in case of unemployment. She noted that income security for persons of the active age who cannot earn (sufficient) livelihoods is one of the minimum social protection guarantees of the Social Protection Floors Recommendation, 2012 (No. 202). Unemployment insurance benefit is one of nine branches of social security provisions of the Social Security (Minimum Standards) Convention, 1952 (No. 102) and the Employment Promotion and Protection Against Unemployment Convention, 1988 (No. 168).

Uzbekistan’s unemployment insurance scheme covers private sector workers in formal employment and military service with exceptions such as public servants, army and police personnel, domestic workers, self-employed and business owners, workers in informal economy and migrant workers. Worldwide, only 38.6 per cent of the labour force is covered in law by unemployment protection benefits, largely due to high levels of informal employment and the lack of unemployment protection schemes. Effective coverage for Sustainable Development Goals indicator 1.3.1 (implement nationally appropriate social protection systems and measures for all, including floors) is even lower: only 21.8 per cent of unemployed workers worldwide actually receive unemployment benefits. Europe and Central Asia with effective coverage of 42.5 per cent of unemployed workers fare better in the global context. Specifically, as of October 1, 2020, approximately 57,000 workers were covered under the unemployment insurance scheme in Uzbekistan. It is expected that the number will increase due to increased amount of unemployment benefit as of January 2021.

According to labour market statistics, presented by Ms Janna Fattakhova, ILO National Expert, Uzbekistan has an excessive supply of labour resources. Consequently, the share of external labour migration and informal employment makes 58% of the overall structure of employment. This is considered a serious challenge in scaling up the social protection system nation-wide.

As of January 1, 2020, in Uzbekistan, more than 1 million people are covered with 11 types of schemes in case of job loss that makes almost 9% to the employed population's total number. In the presentation, Ms Janna Fattakhova also presented an overview of Latin American, particularly Brazilian, Argentinian and Chilean, as well as Korean, Thai and Chinese programmes of social protection. Based on this analysis, four options of unemployment protection schemes, including social insurance policies in Uzbekistan were proposed. Mr John Carter, ILO International Expert, further discussed the benefits and shortcomings of the proposed four options and stressed the need to conduct detailed institutional and actuarial feasibility study once options are narrowed down.

Following lively questions and answers sessions, Mr Jamshid Abruev, deputy minister of finance concluded that the final report and options will be discussed by members of the Thematic Working Groups drafting National Social Protection Strategy. When considering among options they will first of all look at  the main purpose of the unemployment benefit – replacement of the income due to the job loss, creation of a continuum of social protection cash benefits in case of unemployment and labour market services to support re-employment; extension of coverage to workers in informal economy; increasing the base of contributors for insurance in case of unemployment;  risks pooling, collective financing and collective management of the scheme.

The webinar was organized as part of ILO’s project Support for Implementation of Decent Work Country Programme in Uzbekistan and the UN Joint Programme on Strengthening Social Protection in Uzbekistan.