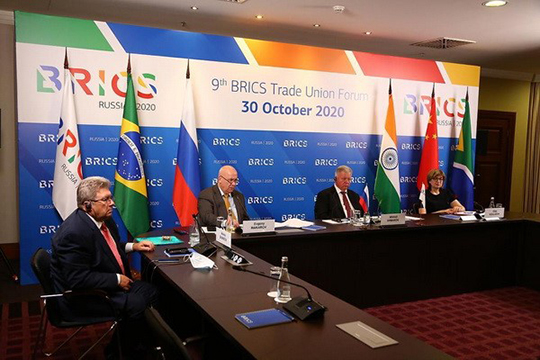 The forum was focused on the pandemic’s labour market implications across the BRICS, as well as on trade unions’ activities, roles and objectives in the current context.

The forum’s participants were addressed by Anton Kotyakov, Minister of Labour and Social Protection of Russia; Sergei Ryabkov, Deputy Minister of Foreign Affairs and Russia’s BRICS Sherpa; Alexander Shokhin, RUIE President; Sergei Katyrin, President of the Chamber of Industry and Commerce of Russia and Chairman of the Russian section of the BRICS Business Council; Maria Elena Andre, ILO/ACTRAV Director; and Olga Koulaeva, Director of the ILO Moscow Office for Eastern Europe and Central Asia.

In opening the meeting, Mikhail Shmakov, Chairman of the Federation of Independent Trade Unions of Russia (FNPR) chairing the BRICS Trade Union Forum, said in his welcome speech:

“…The current pandemic has further aggravated the socioeconomic problems which were already there before the crisis. The governments had to resort to unprecedented spending to support the population. Thousands of enterprises had to temporarily lock down, with many struggling to avoid economic ruin or going bankrupt. […] Development crises bring about a leap in quality. What seemed normal and acceptable only yesterday should be re-considered with the understanding of today’s demands. A new political will is required from all participants in the world of work: workers cannot wait for the pandemic to disappear, they need to earn a living for themselves and their families every day…”

The representatives of major trade union centres from Brazil, India, China and South Africa spoke in the same vein dwelling on the national context in which the pandemic crisis was addressed in the labour markets of their respective countries.

As noted Maria Неlena Andre, ILO/ACTRAV Director, "the ILO and ACTRAV in particular has worked continuously to support and highlight the extent of trade union action around the globe. Furthermore, within the BRICS countries we are directly supporting workers’ representatives in the efforts to strengthen bipartite and tripartite social dialogue, which has to be the cornerstone of any effective response to this crisis, as well as provide capacity building where needed during these trying times. Furthermore, it is our firm belief that the crisis also presents opportunities, opportunities to discuss the transitions that the labour movement is currently undergoing as well as a revaluation in terms of governance structures to support those that are most vulnerable in society".

“The crisis triggered by the coronavirus pandemic has only underlined the role played by social dialogue in the search for political decisions to address its implications,” Olga Koulaeva, Director of the ILO Office for Eastern Europe and Central Asia, said. “The crisis also proved that the economies relying on secure social protection systems and sustainable labour market institutions including public employment services were better equipped to create a safety cushion for their population throughout the period characterized by shrinking jobs and falling incomes.”

Following the Trade Union Forum, the delegates adopted a Declaration addressed to the BRICS heads of state and reflecting the trade union stance on workers’ most urgent concerns.

It is worth noting that in the period of Russia’s presidency at the BRICS in 2020 the Trade Union Forum was for the first time made part of the formal event programme of this international association.