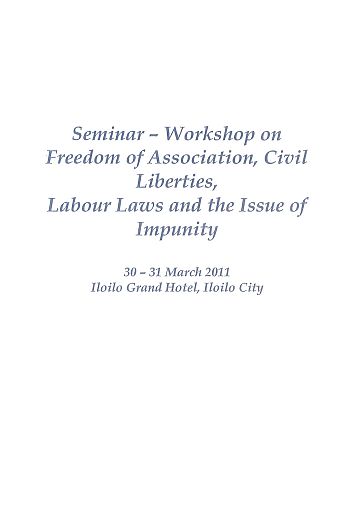 Download:
The highlights of the seminar-workshop include: (a) to enhance knowledge of officials, including key security officers from the Philippine Economic Zone Authority (PEZA) on freedom of association, collective bargaining and labour law implementation; (b) to equip arbiters, mediators and conciliators of the Department of Labor and Employment (DOLE), including officials of the PEZA with techniques on conciliation, mediation and arbitration; (c) to improve the use of international labour standards in the judicial decision-making among justices and lawyers from the Supreme Court and Court of Appeals as well as among DOLE conciliators, mediators and arbiters in dispute settlements; and (d) to raise awareness of governments, employers and workers' organizations on the principles of freedom of association, collective bargaining and links to civil liberties and human rights including strategies to advance investigation, prosecution and conviction.