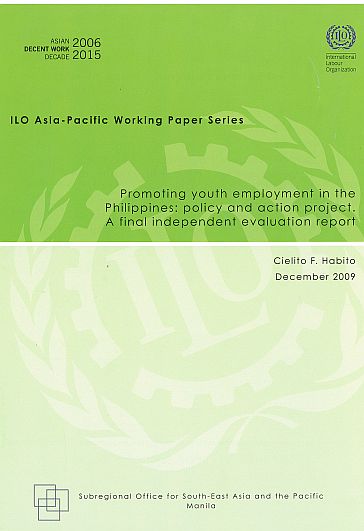 Download:
The evaluation concludes that the general approach was both valid and well-conceived but that the two-year life of the project was too short to achieve all the expected outcomes. While PYEP succeeded in focusing on youth employment as a separate issue from that of the adult population, and in doing so developed champions for youth employability in key agencies. The report notes that inter-agency and multisectoral coordination was much more successful at the local rather than at the national level. A problem that reared up time and again was the “handout” mentality rather than that of “empowerment” that informed attitudes of many participants. Support from the traditional tripartite partners of ILO was inadequate and despite its mandate for addressing youth concerns, involvement by the National Youth Council was weak, especially after a change in NYC leadership.

Despite a number of shortcomings, the positive impact of the PYEP project on youth beneficiaries targeted for assistance was palpable. One major achievement was the commitment of local government leaders and civil society groups which both appear committed to take forward the initiatives begun under PYEP. The evaluation ends with a set of recommendations for further work in this area.

Promoting Youth Employment in the Philippines (PYEP)
Skip to top