Important progress has been made in reducing children’s involvement in employment as shown by a net decline of 40 per cent in employment for those aged 5 to 14 years old from 2004 to 2013. However, child labour continues to effect an estimated 2.1 million children 5 to 17 years old and efforts in this regard need to be intensified and accelerated in order that the goal of child labour elimination is reached in the nearest possible future.

This was revealed by the study, “Understanding child labour and youth employment outcomes in the Philippines”, prepared by Understanding Children’s Work (UCW), an interagency research programme of the International Labour Organization (ILO), United Nations Children’s Fund (UNICEF) and the World Bank (WB) and discussed in a national policy dialogue on Tuesday, 2 February.

Developed under the aegis of the National Child Labour Committee (NCLC) and using the Philippines 2011 Survey on Children (SOC, 2011) and the Philippines 2013 Labour Force Survey (LFS, 2013) as the primary data sources, the study revealed the following trends about child labour and youth employment in the Philippines:
“Addressing child labour is crucial to support the economic and social development of the country. The increasing uncertainty about regional and global growth makes a well-educated and skilled work force essential for sustainable development”, said Furio Rosati, Programme Coordinator of UCW.

The study noted that in the case of the Philippines the priority areas needed to address child labour and youth unemployment are already reflected in existing programmes and policies. However, the key challenge is less the articulation of a policy framework for combatting child labour, and more the effective implementation of existing frameworks.

It called for adequate resources and capacity in the pursuit of these frameworks especially in areas and sectors that experience high levels of child labour. This is a demonstration of a strong political commitment at all levels to make sure the country is compliant with international standards.

The study recommended stronger coordination and convergence of different efforts in order to address child labour at the 5 to 14 years old age range. It also called for improving education access and quality, mainstreaming child labour into social protection programmes, increasing advocacy and social mobilization activities and improving the evidence base on the issue.

For 15 to 17 years old who are in child labour, the study recommended, among others, to strengthen the labour inspection and monitoring systems to detect working children in hazardous conditions and withdraw them when work is intrinsically hazardous and apply risk mitigation when the situation allows for it.

To address youth unemployment, the study mentioned as recommendations the maximization of opportunities for skills development and second chance learning initiatives, support for job search and the promotion of youth entrepreneurship. 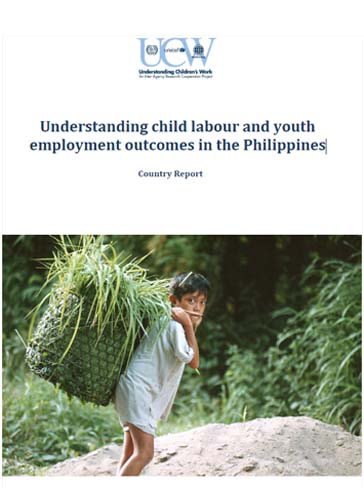