MANILA (ILO News) – Artists and rock bands in the Philippines will stage a free concert against child labour to mark the 117th Philippine Independence Day and the World Day Against Child Labour on 12 June.

“Child labour is wrong. It doesn't give children the opportunity to enjoy their childhood. It's also one of the reasons why they don't finish their education. It's really an alarming thing to just be complacent about,” said Francis de Veyra, musical director and bassist for Radioactive Sago Project, Brass Pas Pas Pas and Bignay Sound System.

In the Philippines, there are 2.1 million child labourers aged 5-17 years old, mostly in hazardous work (95 per cent) according to the Philippine Statistics Authority. Children work on farms and plantations, in dangerous mines, in streets, in factories, and in private homes as child domestic workers. Agriculture remains to be the sector where most child labourers can be found at 58 per cent.

“Child labour is a complex issue rooted in poverty and the lack of access to decent work and social protection for adults. A few pesos these children may earn while putting their health at risk or their lives in danger cannot change their future the way access to education can change their lives. Education opens doors to greater opportunities,” said Lawrence Jeff Johnson, Director of the International Labour Organization (ILO) Country Office for the Philippines.

The ILO’s World Report on Child Labour: Paving the way to decent work for young people will also be launched in Geneva with Nobel Peace Prize Laureate Kailash Satyarthi on 12 June. The report will present empirical evidence of how child labour combined with limited education can lead to increased youth vulnerability and greater difficulties in transitioning to good jobs.

This year’s World Day Against Child Labour calls for:“Let’s guide the children and not let them suffer. Let’s take care of them and protect their rights to be children and to remain children. Let us allow them to freely know themselves and their world. They won’t be able to do if at a young age if they are given responsibilities they are not prepared for”, said Ebe Dancel, former vocalist of Sugarfree, who will perform and strike a chord in the Freedom from Child Labour Concert.

The Batang Malaya: Freedom from Child Labour Concert is free and open to the public. It will be held on 12 June 2015, 5 p.m. at the Rizal Park Open Auditorium in Manila. The concert is organized by the ILO and RockEd Philippines in partnership with the and the National Child Labor Committee (NCLC), which is chaired by the Department of Labor and Employment, National Historical Commission of the Philippines (NHCP), SM Cares and San Miguel Foundation. 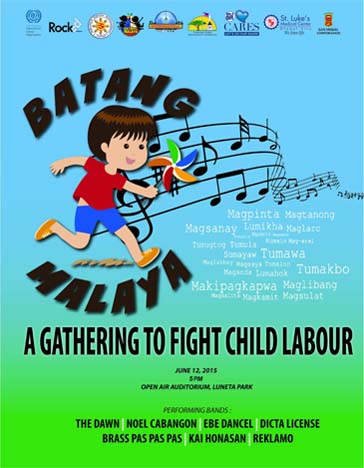