The project in collaboration with its donor, the United States Department of Labor (USDOL), is set to finalize its CMEP by the second quarter of 2016. The CMEP will become the basis for monitoring and evaluating the project’s success or failure. Mr Wayne Bacale, the Monitoring and Evaluation Officer of the project conducted consultations with government partners, the business sector and trade unions from 18 to 21 January 2016. The process allowed him to validate the proposed project indicators and determine the feasibility of collecting data and information. 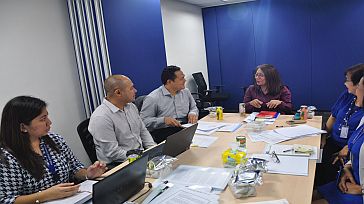 Messeurs Wayne Bacale and Jedel Tabamo of the Building a Generation of Safe and Healthy Youth Project holds a meeting with the Philippine Statistics Authority (PSA). Ms Wilma Guillen, Assistant National Statistician (at the center) along with staff share national surveys that capture data on occupational safety and health. Mr Bacale was accompanied by Mr Jedel Ervin Tabamo, the National Project Coordinator, in the duration of his mission. He validated the monitoring and evaluation indicators and tools with the Department of Labor and Employment (DOLE) and its bureaus and specialized agency- Bureau of Working Conditions (BWC), Bureau of Workers with Special Concerns (BWSC), International Labor Affairs Bureau (ILAB), and the Occupational Safety and Health Center (OSHC). He also had the opportunity to meet officials from the Philippine Statistics Authority (PSA) to determine existing national surveys.

The meeting with the business sector was done through the Employers’ Confederation of the Philippines (ECOP), while trade union consultations were done jointly with the Federation of Free Workers (FFW), Philippine Government Employees Association (PGEA), Philippine Independent Public Service Employees (PIPSEA), Public Services Labor Independent Confederation (PSLINK), which presented challenges in collecting OSH data and the need to capacitate employers and workers. 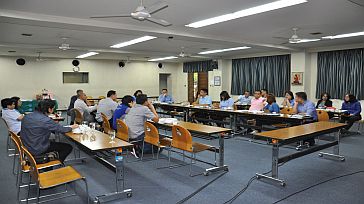 Mr Wayne Bacale discusses proposed project indicators and data collection tools with the Department of Labor and Employment headed by Undersecretary Ciriaco Lagunzad III. The consultation with the DOLE covered the Bureau of Working Conditions, Bureau of Workers with Special Concerns, International Labor Affairs Bureau and Occupational Safety and Health Center. Proposed Occupational and Safety and Health (OSH) researches for the Philippines that will support monitoring and evaluation were also discussed during consultations with stakeholders and partners. Among the studies to be done by the project is a Knowledge, Attitude and Behavior (KAB) survey to gauge capacities of government and social partners.

The Building a Generation of Safe and Healthy Workers (Safeyouth@work Project) is a global project funded by the United States Department of Labor (USDOL) that aims to develop a culture of prevention in the country and improve the working conditions of young workers aged 15 to 24 in the construction, manufacturing and agriculture sectors. The Philippines is one of the pilot countries of the project apart from Viet Nam and Myanmar.

Building a Generation of Safe and Healthy Workers
Skip to top