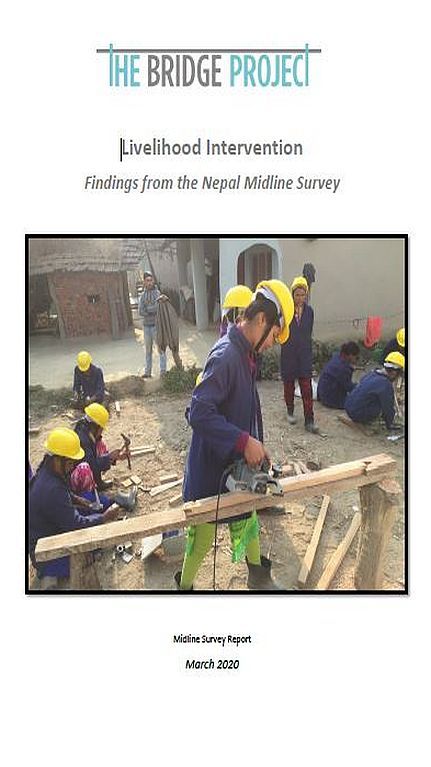 Download:
The main objective of the baseline study was to collect relevant information on the target beneficiaries. This included their demographic information, educational background, livelihood activities, debt and forced labour vulnerabilities.

The midline survey was conducted from September 2019-January 2020. During the midline survey, 483 of the 600 beneficiaries responded, as several participants were unavailable due to travel to India for work or other travel outside of their respective villages and districts. Efforts were made to contact livelihood participants at a later stage, and some were reachable and did respond to the questionnaire by phone. The aim of the midline survey was to monitor changes amongst the trainees after they had completed the training and received the post-training support for specific indicators, particularly concerning their work status, use of skills, forced labour vulnerabilities, debt and also to collect information on their income and social empowerment. The midline survey was conducted approximately six months after the post training support materials were provided. Since the project is ongoing, an endline survey will be conducted at the end of the project period to monitor changes since the start of the project (and comparing this to both the baseline and midline survey data).

The midline survey results indicate that the project has been successful in improving the livelihoods of participants. Specifically, 38.5 per cent of participants had increased their income after the training due to the income received from the trade on which they were trained. When considering the total income (both the income from the trade on which they were trained and any additional trade), 47.8 per cent of livelihood participants reported an income increase. The trainings have been particularly useful for the livelihood participants, as 87.6 per cent reported that they had used the trade skills that they had learnt, primarily at work and at home.

From Protocol to Practice: A Bridge to Global Action on Forced Labour (The Bridge Project) Nepal
Skip to top