The ILO’s SEA Fisheries Project with support from the Coordinating Ministry of Maritime Affairs [and the Ministry of Manpower], Republic of Indonesia, will organize a 2½ day sub-regional event: the Inaugural Plenary Meeting of the SEA Forum for Fishers.

The proposed Conference, which brings bring together stakeholders from all ASEAN countries, will consolidate the achievements of previous regional meetings convened by the SEA Fisheries Project, and constitute the first official meeting of the SEA Forum for Fishers – the multi-stakeholder regional coordination body established by agreement in November 2018.

The Inaugural Plenary Meeting will:

The Inaugural Plenary Meeting will continue to promote an integrated approach to addressing issues of human trafficking and labour exploitation in fisheries by addressing both issues specifically related to trafficking for forced labour and underlying issues of the labour conditions of those who work in fishing. It will also provide a forum for experts from across the region to further discussions already underway in the five working groups of the Forum; and for countries in the region to exchange information and experiences on bilateral, regional and multilateral agreements concerning migrant fishers. Furthermore, it will also provide a platform to discuss modalities to promote decent work in the fishing industry, including the promotion of the ILO Work in Fishing Convention (C.188) and tools developed by ILO for effective implementation of international labour standards and enforcement of labour protection for fishers. The conference will facilitate an exchange of experiences on combatting trafficking for labour exploitation and the protection of fishers nationally, regionally and internationally.

The need to ensure decent work for fishers has become a regional concern for Southeast Asia.

Fishing is recognized as a hazardous occupation. Working and living conditions on board fishing vessels can be dangerous, and capture fisheries have a relatively high incidence of occupational injuries and fatalities. Workers in commercial fishing operations commonly face long working hours, dangerous weather conditions, limited protection from occupational hazards, cramped living quarters, and are remote from help. Migrant fishers face additional challenges, including during the recruitment and placement process, such as with regard to the payment of fees and taking out of loans, obtaining appropriate training or certifications and obtaining the appropriate travel or identity documentation. Once on board, migrant fishers may find that the conditions of employment are vastly different to what they had expected, or that their employment contract is not respected or substituted. Migrant fishers are vulnerable to trafficking and forced labour, due to the relative isolation of their workplace and the transnational nature of commercial fishing operations.

In the fishing sector, the legal framework is weak at both the national and international levels. ILO’s Work in Fishing Convention, 2007 (No. 188) sets minimum requirements for working on board fishing vessels and entered into force on 16 November 2017. In Southeast Asia, Thailand has ratified Convention No. 188 in January 2019. Indonesia has been engaging in national tripartite consultations on the issue. The Philippines has also initiated national discussions.

Steps to regional coordination so far

At the Tripartite Meeting on Issues Relating to Migrant Fishers (TMIMF) held in September 2017 in Geneva, one of the outcomes was a call to effectively address the serious violations of the rights of migrant fishers and to enforce their fundamental rights at work and access to justice – irrespective of their migrant status. In particular, the draft Conclusion from the TMIMF highlighted the need to clarify the division of roles and responsibilities for enforcement, compliance and inspection between flag States, port States, coastal States, and labour-sending States. The lack of coordination between States and among government agencies with a role in the protection of the rights of fishers, including migrant fishers, can impede the effectiveness of the response.

ILO’s SEA Fisheries Project: Strengthened Coordination to Combat Labour Exploitation and Trafficking in Fisheries in Southeast Asia began in April 2017. The project aims to reduce trafficking and labour exploitation in fisheries by strengthening coordination at the regional and national levels, and acts as an incubator for a Regional Coordination Body (RCB). The project team is based in Jakarta but covers Southeast Asia regionally.

On 27 and 28 March 2018, the ILO and the Coordinating Ministry of Maritime Affairs co-hosted the Consultative Forum on Regional Cooperation against Human Trafficking, Labour Exploitation and Slavery at Sea in Bali, Indonesia (“the Bali Forum”). The Bali Forum brought together a broad spectrum of stakeholders to discuss and debate the problems of human trafficking, labour exploitation, and human rights abuses at sea in fisheries. Representatives of government authorities with the mandate in counter-human trafficking efforts, labour protection, fisheries management, as well as workers’ organizations, and employers’ organizations converged on Bali from Brunei, Cambodia, Indonesia, Lao DPR, Malaysia, Myanmar, the Philippines, Singapore, Thailand and Vietnam. In addition, a number of CSOs, NGOs, and private sector actors also attended as observers.

The two-day discussion and consultation process included opportunities for the government representatives with a range of related mandates, workers representatives and employer representatives to discuss issues with their counterparts from across Southeast Asia. Representatives from the government of Indonesia, Thailand, and the Philippines also shared their policies, practices, and lessons learnt on various aspects of combatting human trafficking and labour exploitation in fisheries. Representatives from workers’ organizations and the private sector also presented their efforts on improving labour conditions as well as collaborations between them. Regional and international experts also led discussions on relevant regulatory regimes, and different models of regulation.

The Consultative Forum on Regional Cooperation in Bali adopted its Conclusions and agreed on the need for a regional coordination body specifically focused on the unique challenges of trafficking for forced labour in fisheries in Southeast Asia. The Conclusions includes recommendations to establish a multi-stakeholder regional coordination body in Southeast Asia to improve coordination in combating human trafficking, labour exploitation and slavery at sea, with a particular focus on trafficking for labour exploitation, and working and living conditions on commercial fishing vessels, and slavery at sea in fisheries.

The Southeast Asia Forum to End Human Trafficking and Forced Labour in Fisheries (SEA Forum for Fishers) was agreed at the Southeast Asia Conference on Regional Coordination and Action to Combat Trafficking and Labour Exploitation in Fisheries in November 2018 in Bali attended by multi-stakeholder participants from eight South East Asia countries.

The SEA Forum for Fishers was established as a non-binding voluntary multi-stakeholder initiative to strengthen coordination among the Members to combat trafficking in persons, forced labour, modern slavery, as well as labour exploitation in the fishing and seafood sector through an integrated, holistic, human rights-based and action-led approach. Through extensive consultations and revisions, the terms of reference, mandate, and structure of the SEA Forum for Fishers was agreed by consensus in November 2018, with initial broad-based Membership and Technical Advisors also initially agreed and to be confirmed at the Inaugural Plenary Meeting in 2019. Please see attachments: Terms of Reference including Annexes for the SEA Forum for Fishers, and the Resolution dated November 2018. 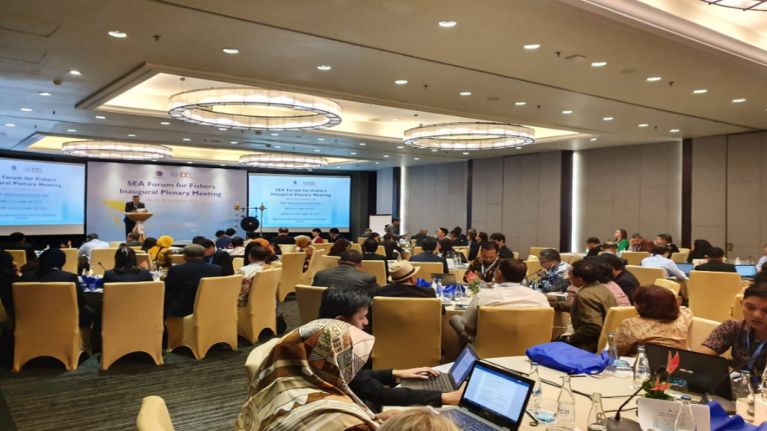 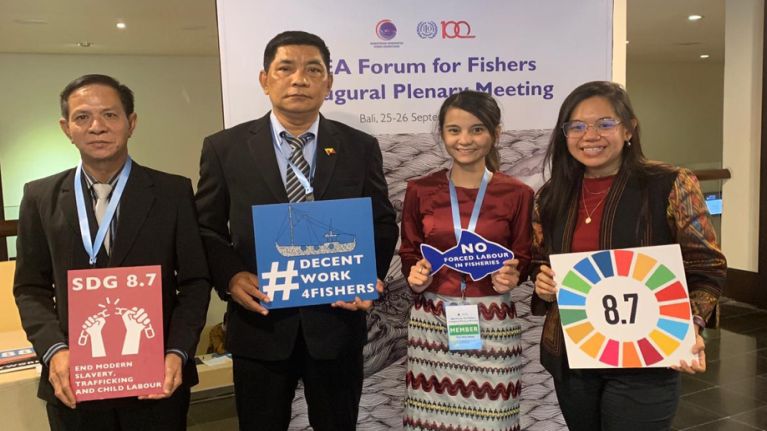 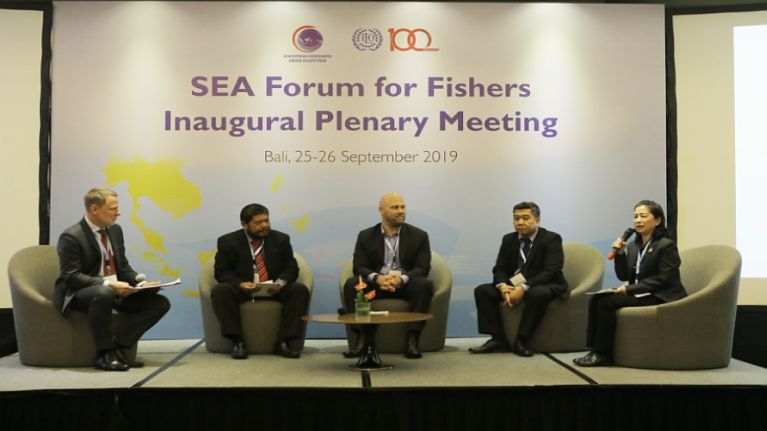