JAKARTA (Joint Press Release): As an effort to document the lives and the struggle of Indonesian domestic workers to be recognized as workers, the International Labour Organization (ILO), in collaboration with JALA PRT and the Jakarta’s Independent Journalist Alliance (AJI Jakarta) is going to launch a book titled “We Will Not Be Silent: 31 Stories of Domestic Workers Behind the Domestic Walls” on Thursday, 10 August 2017, at Wisma Antara, Jakarta.

In the launch, seven leading Indonesia public figures will lend their voices to the plight of domestic workers who have to work long hours with low wages and without employment contract, day off and leave, social protection and legal protection. Selected stories will be read out by Minister of Manpower Hanif Dhakiri, Lukman Sardi (actor), Morgan Oey (actor), Nia Dinata (director/producer), Sari Nila (presenter), Atiek Cancer (actress) and Giwo Rubianto (Chair of Kowani).

The launch and monologues are part of the ILO constituents and partners’ advocacy campaign to promote decent work for domestic workers and the elimination of child domestic labour.

The book consists of 31 stories written by 27 domestic workers who aspire to change the perception and stigma against domestic workers. Through their stories, these domestic workers strive to break the existing social and political systems, urging that their professions should be recognized as workers, they should be legally protected under the law, their labour rights should be respected like other workers and the child domestic labour should be eliminated.

In their own words, these women speak about their daily lives, injustice they have to face, mistreatment and abuse they have to endure, family struggles as well as their aspirations and hopes. They also talk about their desire to be united under the unions, their aspiration to continue improving their skills and capacities and their continuous efforts to advocate policy makers and the public at large about the recognition of domestic workers as workers as well as the elimination of child domestic labour.


Journalists and mass media should urge the country to better protect domestic workers so that they do not become victims of exploitation behind the closed doors."

“The ILO trusts that these stories will touch the heart of Indonesian people and raise awareness in the public and decision-makers in Indonesia about some of the challenges faced by domestic workers. Such awareness will aid the development of the required labour and human rights protections, as well as targeted skills development to make their occupation more professional and respected,” stated Michiko Miyamoto, the ILO’s Country Director in Indonesia, commenting the launch of this publication.

In addition, these stories are the results of writing and social media courses conducted by the ILO, in collaboration with JALA PRT and AJI Jakarta, to improve skills and capacity of domestic workers in utilizing technology and in voicing their own aspirations through citizen journalism platform and social media. To date, more than 60 articles and stories written by domestic workers have been published and disseminated widely through blogs, Facebooks and twitters.

“Through social media, domestic workers are able to express themselves, voice their concerns and fight for their own rights and lives. Through these stories, we hope that we could change the perception of the public that domestic work is work and domestic workers are workers just like any other profession,” stated Lita Anggraini, National Coordinator of JALA PRT.

Domestic workers represent the single largest group of female salaried workers contributing to the households of others in their own country or abroad. To date, the ILO, based on the data from the Statistics-Indonesia (BPS), estimates that there were 4 million domestic workers in Indonesia; of these, around 85 thousands are children under the age of 18 years old. 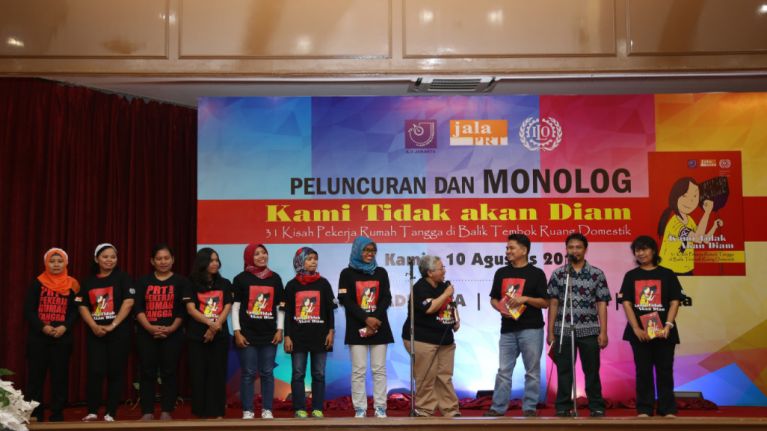 ILO to launch a series of short videos on domestic workers: “We have the same right” campaign

How better skills can boost recognition of domestic work