ISLAMABAD (ILO News): The ILO Country Office for Pakistan (ILO-CO), through its EU funded project ‘Trade for Decent Work (T4DW)’ convened a stakeholders consultation on the draft report on the gaps and situation concerning P029 - Protocol of 2014 to the Forced Labour Convention, 1930. The Ministry of Overseas Pakistani and Human Resource Development (MoOP&HRD) initiated the gaps analysis with ILO’s technical assistance.

The consultation took place on 24 August 2021 at the ILO Country Office for Pakistan and brought together forty participants with the objective of presenting the gaps, challenges and recommendations concerning the Forced Labour Protocol (P029) situation in Pakistan.

Mr Abid Niaz Khan, National Project Coordinator of the T4DW moderated the event. He informed the participants that the Forced Labour Protocol (P029) takes cognizance of various forms of forced labour in the contemporary world of work. He also apprised the meeting that, a team of international and national consultants worked on the Forced Labour Protocol (P029) gaps analyses assignment, under the technical backstopping of ILO experts from the Decent Work Technical Support Team (DWT) for South Asia and the related experts from ILO Geneva-Headquarters. Consequently, a draft final report of the gaps analyses was developed for consultation and validation by stakeholders including the ILO’s tripartite constituents (Government, Employers and Workers).

Mr Syed Saghir Bukhari, Officer in Charge of ILO thanked the MoOP&HRD for their leadership on the gaps analyses. He also highlighted that the consultation was an opportunity for the participants to be familiarised to the Forced Labour Protocol (P029), its related situation and gaps in Pakistan’s milieu, and enabled the researchers to gather feedback and inputs to refine and contextualize the research.

Ms Elena Sychenko, international consultant shared the research findings with the stakeholders. She introduced the scope of research, its method, findings, recommendations and a road map towards the possible ratification of the Forced Labour Protocol (P029) by Pakistan. She presented the challenges and recommendations with respect to all articles of the Forced Labour Protocol (P029) within the framework of Prevention, Protection, Remedy and Cooperation. Ms Elena Sychenko highlighted Poverty, low literacy level, deeply rooted discrimination, weak law enforcement, corruption, vulnerabilities of migrant workers and the absence of a coherent law that caters to Prevention, Protection, Remedy and Cooperation framework on forced labour, as the underlying causes of the persistent forced labour in Pakistan. She also recommended the need for addressing these challenges, social protection for all and the better labour administration.

The presentations were followed by discussions.

Mr Shoaib Khan Niazi, Chairperson of the Pakistan Brick Kilns Owners Association (PBKOA) highlighted the need for a comprehensive law as a first step towards addressing the gaps identified in research. He also spoke about the need for ensuring the inclusion of brick kiln workers in the employee social security schemes.

Mr Fasil ul Karim Siddiqui spoke on behalf of the Employers Federation of Pakistan (EFP). He pointed out that laws and jurisprudence in Pakistan have mostly been targeting the bonded labour. He stressed the need for a comprehensive law that holistically deals with all forms of forced labour. He suggested that such a law be made at federal level that could later inform the labour law reform at provincial levels. He lauded the efforts of the PBKOA, its readiness to participate and contribute its part in eliminating the menace of bonded labour from brick kilns. He also demanded an enabling environment for PBKOA’s initiatives.

Mr Chaudry Naseem and Mr Chaudry Yaseen (President and General Secretary respectively) of the Pakistan Workers Federation (PWF) hinted they would resume the good practice of producing the position papers on Fundamental Principles and Rights at Work. They also expressed merit in possible ratification of the Forced Labour Protocol (P029) by Pakistan. Mr. Nasir Mansoor of the National Trade Union Federation called for the need to addressing the issue of involuntary work/ extra hours in the textile and readymade garments industries.

Mr Raza Ali of the Peace and Justice Network (PJN) and Ms Asiya Arif of the Society for the Protection of the Rights of the Child (SPARC) highlighted the need for re-activating and making functional the District Vigilance Committees.

Mr Ishrat Ali, Federal Secretary, MoOP&HRD in his closing remarks appreciated the research and its coverage of the persistent forced labour challenges both in the urban and rural economy. He named various reforms that had taken place since 1990s within a fast growing economy around the Prevention, Protection, Remedy and Cooperation motif of forced labour. He expressed optimism that further improvements could be made by connecting some dots e.g. documenting the legislative and institutional reforms that have already happened and specifically pointing out as to what more need to be done. He sought a practicable roadmap founded in the ground realities of Pakistan.

In relation to the plight of migrant workers, Mr Ali mentioned that there were 24 community welfare attachés from Pakistan, posted in 16 countries. They serve the workers in destination countries and help connect the workers to their families in the host country. He invited concrete suggestions towards strengthening the protectorates and better regulating the overseas employment promoters.

Mr Ali advocated the use of procurement tool to clean the supply chains from the menaces of forced labour and child labour. He sought suggestions for promoting responsible procurement. 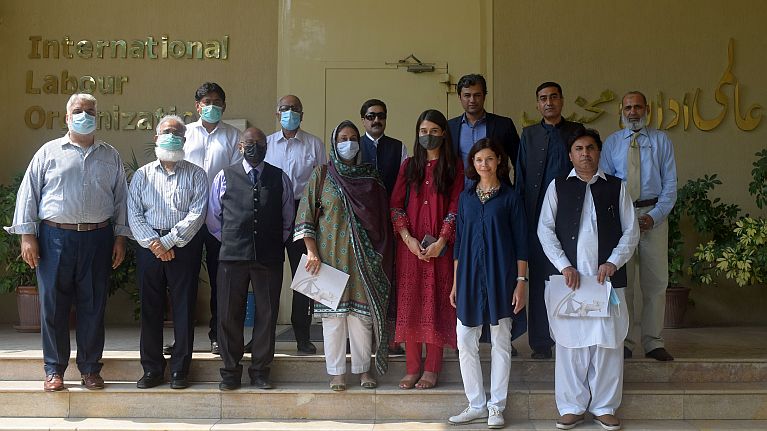