ISLAMABAD (ILO News): On 3rd July 2021, over 150 multi-stakeholders attended a seminar arranged by Pakistan Workers Federation (PWF). The World Day Against Child Labour commemorative seminar was held in district Bahawalpur under the theme “Act Now, End Child Labour”. The seminar was technically supported by the ILO Country Office for Pakistan through its project on Promoting Fundamental Principles and Rights at Work (FPRW) in Cotton Supply Chain funded by INDITEX.

A tripartite panel discussion on Sustainable Development Goal (SDG) target 8.7 i.e. ending child labour in all its forms by 2025, characterized the seminar. The panel was of the opinion that integrated and holistic approaches need to be adopted to achieve SDG target 8.7. The panel was also of the view that the implementation of labour laws in true letter and spirit could help to achieve the target.

As part of the discussion, Mr Muhammad Amin, Deputy Director, Labour and Human Resources Department-Bahawalpur, Ch. Jamshed Naeem, Farmer and Mr Mukhtar Awan, President, PWF South Punjab shared the existing complaint mechanism in case of violations and exploitation of workers, including child labour. Mr Amin said that the Department would support the project mainly linking the cotton growing communities and their children to the existing social protection schemes. Mr Awan shared that PWF met local parliamentarians of the Punjab Government to amend the law regarding the process of registration of trade unions in the agriculture sector. He referred to the Sindh Government, which permitted the workers and employers to form trade unions and employers’ associations in the agriculture and fishery sector under the Sindh Industrial Relations Act 2013. Mr. Awan added that the parliamentarians had offered that they would arrange a meeting between PWF with the Chief Minister, Punjab to discuss this matter. Mr Awan further shared that 131 out-of-school children had enrolled in formal schools against the target of 200 children in Bahawalpur and Multan districts under the PWF pilot intervention. He thanked the ILO and INDITEX for providing technical assistance to the cotton communities of South Punjab.

Ingrid Christensen, Director, ILO Country Office for Pakistan, joined the seminar virtually as Chief Guest. She appreciated the efforts of the PWF team and the support to local stakeholders in arranging the seminar for cotton growing communities to bring awareness about the FPRW and to facilitate the dialogue on how to ensure the application of these core principles and rights, including that of elimination of child labour. She applauded participants for their active participation. She thanked the youth representatives who had voluntarily supported the arrangement of the seminar. Ms Christensen referred to the 2021 as being the International Year for the Elimination of Child Labour and that all stakeholders needed to play an active role to achieve SDG target 8.7 concerning elimination of child labour and forced labour by 2025. Hence the importance of acting now to end child labour. She appreciated the expressed commitment to address the issue of child labour and stressed the importance of children being able to attend schools as well as to spend leisure time playing with other children. Ms Christensen expressed gratitude to INDITEX for supporting the project. 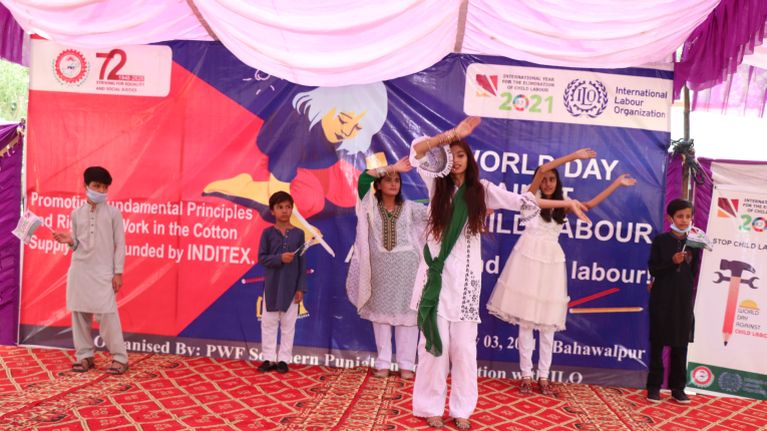