Ms Sarnaila Sharif representative of the Ministry of Overseas Pakistanis and Human Resource Development (MOP&HRD) reaffirmed the Government’s commitment to eradicating child labour through the development and implementation of appropriate legislative, policy, and strategic frameworks. She commended the progress made by provincial governments in developing legislative frameworks for the prohibition of employment for children with the caveat that additional efforts were required for effective enforcement of legislation. Ms Sharif highlighted the on-going Child Labour Surveys as one of the critical steps in generating evidence-based policies and legislation to eradicate child labour.

Child labour deprives the children of their childhood, education, health and makes them vulnerable to exploitation, stated Mr Mazhar Siraj, Senior Social Development Advisor and Team Leader, Accountability, Inclusion and Rights at Foreign, Commonwealth, and Development Office (FCDO). He further stated that forced labour was a form of modern slavery, and nobody wants to see the children as slaves. Child labour is a multifaceted issue, which requires a variety of interconnected measures, including data synthesis and analysis, policy formulation and its implementation, as well as community-based actions. Mr Siraj cited FCDO funded the AWAZ -II project as an example that aims to bring changes in communities' attitudes to eradicate harmful practices against children.

In his remarks, Mr Chaudhry Muhammad Yaseen, General Secretary, Pakistan Workers Federation, said, inadequate implementation of relevant legislation, weak economic policies, low level of income, rapid increase in population and a large number of un-registered employers drive millions of children in child labour. He mentioned that agriculture was the largest sector, with a large number of child labourers without legal protection. In order to eradicate child labour, Mr Yaseen recommended the ARC project to intervene at the union council level, facilitate the registration of enterprises, provide skills training and advocate for increasing the minimum wage for workers, so that poor families were not compelled to involve their children in labour. He said PWF, through its regional offices in all provinces, would provide a platform to coordinate efforts with ILO at the grass root level.

Ms Ingrid Christensen, Country Director, ILO Pakistan, highlighted the challenges that the COVID-19 pandemic had brought about, including the possible increase of child labour as a means for survival. She further stated that parents might be tempted to engage their children in economic activities with the closure of schools and educational activities. Underscoring the need for accelerated efforts to end child labour, Ms Christensen highlighted that 2021 was declared the International Year for the Elimination of Child Labour by United Nations. She urged the stakeholders to pledge to end child labour, share stories to inspire and scale up efforts to eliminate child labour by 2025.

Deliberating on child labourers' working conditions in the priority sectors, stakeholders noted that children involved in garbage/rag picking were exposed to hazardous materials and biological agents, including handling of medical waste for recycling. They also observed that domestic workers were vulnerable to physical, emotional, and sexual violence, longer working hours, and challenging working conditions. They reflected that children involved in brick making experience harsh working conditions as well as bonded labour. They added that the majority of child beggars came from rural to urban migrant families or trafficked and warped into physical disability to invite sympathies and charity. Stakeholders emphasized that the future Child Labour Survey and Labour Force Survey should consider including child begging as an economic activity. They also suggested selecting the districts for interventions based on HDI ranking.

Stakeholders suggested the need to formalize and create apprenticeship and learning environments for children above the minimum age for working, particularly in the auto repair sector. They further added that regularizing the auto/mechanic workshops as technical training providers would incentivize the employers to deliver effective and improved workplace-based training and support adolescents learn and transit to decent work.

The consultation concluded with ILO’s vote of thanks to all stakeholders for their keen interest, active deliberations, and valuable inputs. The ILO encouraged the stakeholders to submit pledges for actions and hoped to receive continued support to prevent and eliminate the worst forms of child labour in Pakistan. 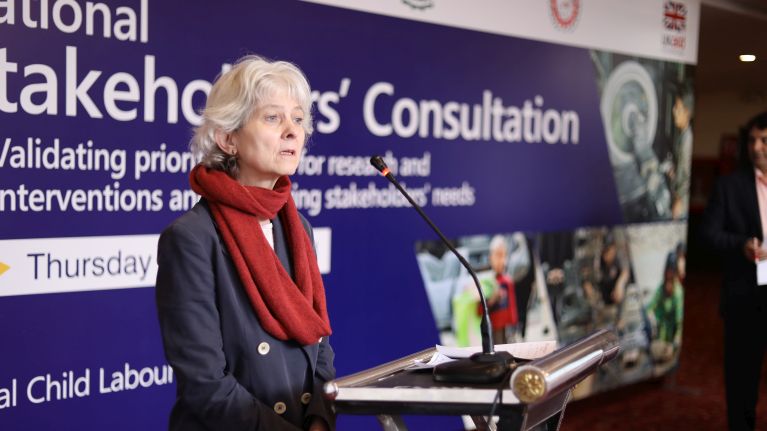 2021: International Year for the Elimination of Child Labour
Skip to top