ISLAMABAD (ILO News): Speedy and fair justice for workers who are the real builders of the nation, wealth and growth, should be a priority of the judicial system, particularly the labour courts. This was said by Honourable Justice Mansoor Ali Shah, Judge of the Supreme Court of Pakistan during the concluding ceremony of the workshop for judges of the labour courts and members of the National Industrial Relations Commission (NIRC). Speaking at the same event, Justice Shah added that, “as dispute settlement managers, labour court judges should wear a human rights cap while adjudicating cases and make full use of the whole corpus of guarantees and rights articulated in the country’s constitution, national, international and case laws. This would protect the social, economic and human rights of workers and achieve industrial peace, rapid economic and social growth in the country”.

He called for continued training of judges particularly in alternate Labour Dispute Resolution (LDR), International Labour Standards (ILS), labour laws and Information and Communication (ICT) technologies to promote an adroit, robust and dynamic labour jurisprudence system. Deploring the absence of a celebrated judgements and little public interest litigation (PIL) around the settlement of labour disputes in the country, Justice Mansoor Ali Shah wished that the labour justice system could produce something that could be celebrated. He also expressed dissatisfaction that only thirty functional labour courts in Pakistan were catering to dispute settlement and violation of workers’ rights for a workforce of 65 million. Referring to ten thousand cases so far filed in the labour courts, he expressed the concern that either everything was well or there was something very alarming.

Justice Mansoor Ali Shah also highlighted the need to safeguard the rights of workers in the backdrop of Pakistan’s international cooperation for mega infrastructure development and trade as well as the challenges posed to the world of work by the COVID pandemic. He thanked the International Labour Organization (ILO) and the European Union (EU) for their cooperation and collaboration with the Federal Judicial Academy (FJA) and desired that the cooperation will be deepened to cultivate a better world of work in Pakistan. He also suggested that a joint sitting of the judiciary, executive and legislature should be planned to plan a corresponding way forward.

Mr Hayat Ali Shah, Director General of the FJA in his concluding remarks thanked the ILO and EU for their generous support towards organizing the workshop and hoped to continue the process to create a sustainable labour dispute resolution system in Pakistan.

Mr Ulrich Thiessen, First Secretary, Development Advisor – Rural Development & Economic Cooperation, European Union Delegation to Pakistan in his speech highlighted the trade incentives that Pakistan is benefiting from under its GSP+ status since January 2014. He gladly noted the significant increase of Pakistan’s exports to EU under the GSP+ and the corresponding growth of its export revenues. He hoped the Pakistan would intensify its efforts towards improved compliance and reporting of the twenty-seven UN treaties including the eight fundamental labour standards to the better compliance and reporting of which the GSP+ continuity is conditioned. He further hoped that sensitization of labour court judges to the international labour standards will result in improved compliance and enforcement of the fundamental labour standards.

Ms Ingrid Christensen, Director, ILO Country Office for Pakistan said that an effective judicial system not only benefitted Pakistan’s 65 million workforce, but their dependent families. Therefore, the fundamental rights of the workers, if not provided, had an adverse effect on a larger segment of society, thus hampering socio-economic growth and hindered progress towards achieving the Sustainable Development Goals. She appreciated the Supreme Court’s resolve to improve the world of work in Pakistan by including all the organs of the state, employers and workers in this effort. Ms Christensen highlighted the need for the judicial system to understand Pakistan’s international obligations so that the court judgements repugnant to the fundamental rights of the workers are averted.

The workshop was held under the ILO’s EU funded project on ‘Trade for Decent Work’ in collaboration with the FJA and ILO International Training centre, Turin from 22 to 23 February 2021. Nineteen judges/presiding officers of the labour courts from all provinces of Pakistan, along with two members of the NIRC and research officers from the Supreme Court of Pakistan participated in the workshop. The workshop included presentations on ILS and best practices in terms of their use in labour jurisprudence. Workshop participants were also introduced to self-learning modules developed by the International Training Centre (ITC)-ILO. Moreover, a session reflected on work of the labour judiciary in Pakistan and the scope of international law in improving the labour jurisprudence. 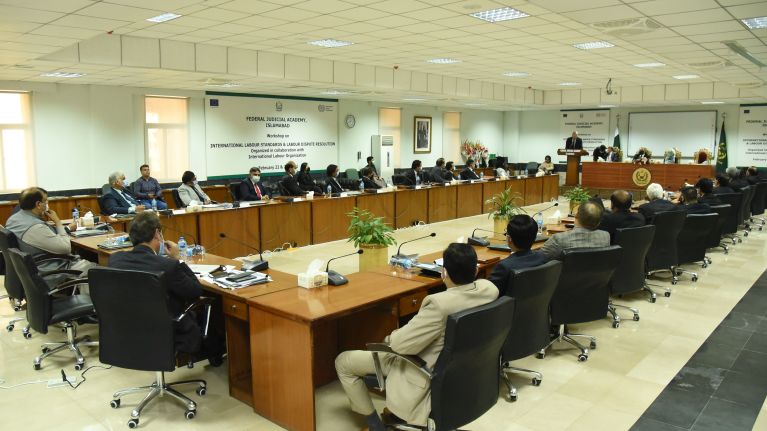