ISLAMABAD (ILO News): Work place harassment and violence at work is a global phenomenon which poses serious challenges in optimizing the potential of women and men in the labour force and is also detrimental to promoting conducive, productive and safe work places. In other words, violence and harassment at work undermine the realisation of decent work.

During the 107th session of the International Labour Conference to be convened in May 2018, Governments, Workers and Employers Organizations will debate on the need for a specific standard on ending violence and harassment against men and women in the world of work. This discussion which began in 2015, has set the course for global action to make workplaces safer by formulating a specific ILO standard on the subject.

In order to prepare its constituents and social partners on the issue of  violence and  harassment at work and to trigger social dialogue on a possible standard on this topic, the ILO Pakistan Office in collaboration with Care International and with the financial assistance of the EU (Directorate General for International Cooperation & Development DG-DEVCO) organized an awareness raising seminar on ILO Conventions C-100 (Equal Remuneration Convention,1951) and C-111 (Discrimination- Employment & Occupations-1958). This was followed by an Experts Group Meeting on Ending Violence and Harassment against Women and Men in The World of Work’.

The event, which took place on 24th May 2018 drew the active participation of provincial and federal government, representatives of the workers’ and employers’ organizations, civil society, judiciary, academia, the UN and the media.

Ms. Marvi Memon, Federal Minister and Chairperson Benazir Income Support Program, thanked the ILO and Care international for convening the experts group meeting on an important and imminent issue. She said that women constituted more than half the population of Pakistan and the country could not progress without their active participation in the economic activity and in the world of work. Ms. Memon highlighted that work place harassment was a universal issue, but promoting a culture of zero tolerance, is a responsibility of all stakeholders. She said that the federal  government has been strengthening the Federal Ombudsperson Secretariat (FOS)  and is also expanding the scope of the Act for Protection Against Harassment of Women at Workplace’ to ensure harassment free work places that resonate with ideals of decent work.  Ms. Memon hoped that the consultation would pave the way for further deliberations and concrete actions of support by the ILO and the other UN organizations.

Mr. Muhammad Hashim Yousaf Popalzai, Secretary, Ministry of Overseas Pakistanis and Human Resource Development (MoOPHRD), thanked the ILO and Care and said that the MoPHRD was coordinating with the provincial governments to take steps to promote safe and secure work places. As a signatory to Pakistan’s Decent Work Country Program, he said his Ministry was striving to promote fundamental principles and rights at work by formulating policies and enacting laws to promote decent work in Pakistan in collaboration with employers’ and workers’ organizations. Mr. Polpalzai added that it was important for stakeholders to promote safe work places to capitalize on the full potential of women workers, who can only contribute to the development of the country if they were provided with safe and secure work places.

Ms. Atifa Raffat, Joint Secretary MoOPHRD, participated in the expert’s group panel discussion and briefed the participants that the government was committed to promoting decent and harassment free work places for both women and men. She further stated that the legislative efforts led by the federal government was evidence of the government’s commitment to confronting and addressing the issue.

Mr. Majyd Aziz, President of the Employers’ Federation of Pakistan (EFP) and Mr. Zahoor Awan, General Secretary of the Pakistan Workers Federation (PWF) presented their analysis on the application of C-100 and C-111 and highlighted challenges and issues that needed to be addressed for harassment free work places. They suggested the creation of tripartite inquiry committees at work places, to investigate harassment cases. These they added, should include women and trade union representatives.

Mr. Fasih ul Karim Siddique, General Secretary, Employers Federation of Pakistan (EFP) highlighted the role of the employers in promoting zero tolerance at the workplace and its linkage with enhanced productivity.

A representative from the Federal Ombudsperson Secretariat (FOS) made a presentation on the various aspects of the ‘Act for Protection Against Harassment of Women at Workplace’ and highlighted the procedural steps of lodging complaints with the FOS, the online complaint mechanism and the time frames for deciding such cases. The representative thanked the ILO and Care International for a much needed debate and discussion on such an important topic.

Ms. Ayesha Salma Kariapper, Country Director, Care International Pakistan, thanked the ILO for partnering with Care International on a topic of paramount importance. She dilated on the work that Care International had done in Pakistan on this important subject and hoped that the discussions on such an important theme would continue, and result in promoting harassment free work places and that the implementation of the existing laws on workplace harassment will become more effective.

Speaking on behalf of the ILO, Ms. Belinda Chanda, Program Analyst welcomed the participants and highlighted the importance of establishing harassment free work places in order to capture the full potential of women and men to the economic development of the country. She also highlighted the work the Government of Pakistan had initiated by developing a model law on anti-harassment as well as the efforts of the Federal Ombudsman’s Secretariat in creating a dedicated platform to capture and address harassment cases.

The recommendations and discussions at the consultation will be instrumental in facilitating the Pakistan’s delegation inputs to the ILC discussion on the proposed standard on Violence and Harassment against mean and women in the World of Work. 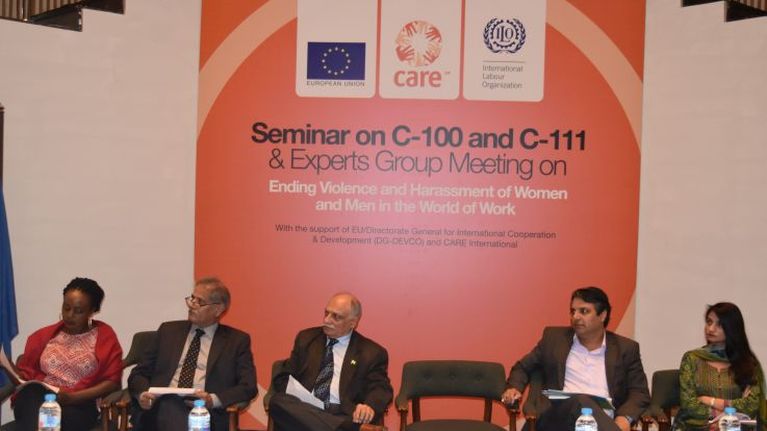