SIALKOT (ILO News): The International Labour Organization (ILO) in collaboration with the Employers’ Federation of Pakistan (EFP) and Baidarie organized a sports gala on 28 March 2018 in Sialkot under the theme “Promoting a level playing field”. The event was organized under the Japan funded project on More and Better Jobs in the Sports Goods Industry which has been under implementation since August 2015. Over 400 participants including ILO’s constituents, Embassy of Japan, Pakistan Olympic Association, social partners and key stakeholders attended the event. The event raised awareness on the importance of sports activities for decent work and better working conditions in line with principles of the Multinational Enterprises and Social Policy (MNE) Declaration which seeks to maximize the positive contribution that (multinational) enterprises can make to economic and social development.

Chief Guest, Mr Shinichi Honda, First Secretary, Deputy Head, Economic & Development Section, Embassy of Japan in his remarks appreciated the stakeholders’ efforts in achieving objectives set out in the project. Mr Honda also stated that the Government of Japan would continue its support in the promotion of decent work and sports activities in Pakistan.

Mr Majyd Aziz, President, EFP in his remarks stated that decent work would not be achieved in the absence of a healthy society and that this could be facilitated through the promotion of the sports goods sector which has also proven to increase employment opportunities and productivity.

Mr Fasihul Karim Siddiqi, Secretory General, EFP shared the achievements of the project and requested the Government of Japan to provide further support for the continuity and expansion of the project to other industrial hubs in Pakistan such as Karachi, Hyderabad, Lahore and Faisalabad.

Ms Ingrid Christensen, Director of the ILO, emphasized on the importance of teamwork to achieve decent work in Pakistan and improve working conditions. She also highlighted the importance of gender equality and occupational safety and health at the workplace. Ms Christensen expressed her gratitude to the Government of Japan for supporting the project adding that the Sialkot based industries supplied its sports goods products to world known brands which were used in international championships such as the football world cup and the Olympic games, therefore. For this reason, the industries in Pakistan should be socially compliant and the products should be produced under decent working conditions. 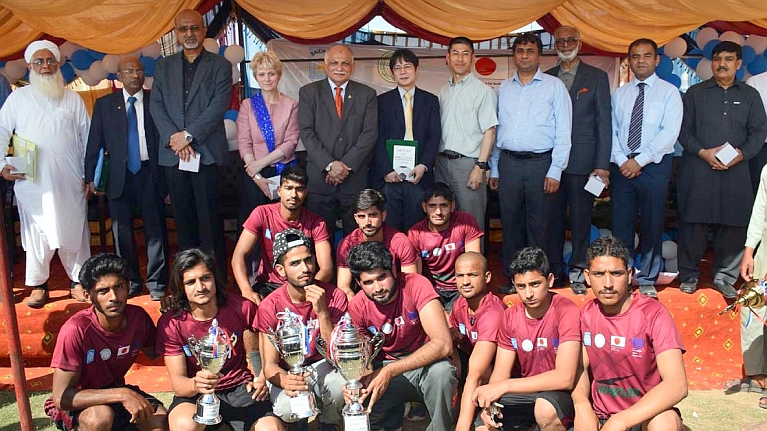