ISLAMABAD (ILO News): The ILO under its Labour Standards in Global Supply Chains project (LSGSC) convened a three day workshop on “Wage Policy in Pakistan” for the officials of the departments of labour and planning and development from Provincial Governments and ICT, Pakistan Bureau of Statistics and the Ministry of Overseas Pakistanis and Human Resource Development from 21-23 February 2018 in Islamabad.

Ms Atifa Raffat, Joint Secretary (HRD) of the Federal Ministry of Overseas Pakistanis and Human Resource Development (MOPHRD) acknowledged the ILO and the German Government’s contribution in strengthening industrial relations in Pakistan. She stated that there was need for a systematic approach to address the issues of wage structures and inequality. Ms. Atifa also pointed out that the Government had an important role to play in promoting a regulatory environment for setting social and economic benchmarks, including wages, labour legislation, and aspects of social protection. She also conveyed the Ministry’s commitment to facilitate the enforcement of labour laws and create a space for dialogue that will improve the wage setting regulations in Pakistan.

Ms. Ingrid Christensen, Country Director, ILO Pakistan in her closing remarks emphasised on the need to engage relevant stakeholders when designing wage policies. She said that the world of work had become complex given the emerging trends in employment and employment relationships which pose new challenges to policy makers. Ms. Christensen further added that while setting of evidence based minimum wages is important, the need is for its effective implementation and application through labour inspection and judiciary such that MWs can be accessible and available to all workers.

Since the 18th Amendment to the Constitution of Pakistan, minimum wage setting has been delegated to the provinces . The provinces and federal governments exercise their powers in respect of wage setting under the 1961 Minimum Wage Ordinance or provincial legislation. Minimum Wage Boards (tripartite in composition)  have been  established in each province and at federal level and are mandated the role of recommending minimum wages rates for unskilled workers and skilled workers in scheduled industries, as well as for unskilled and juvenile workers. The current legislation is silent as to the purpose of statutory minimum wage, and there is no conceptual agreement among stakeholders as to the purpose of minimum wages in Pakistan. This calls for a joined up thinking on wage reforms. 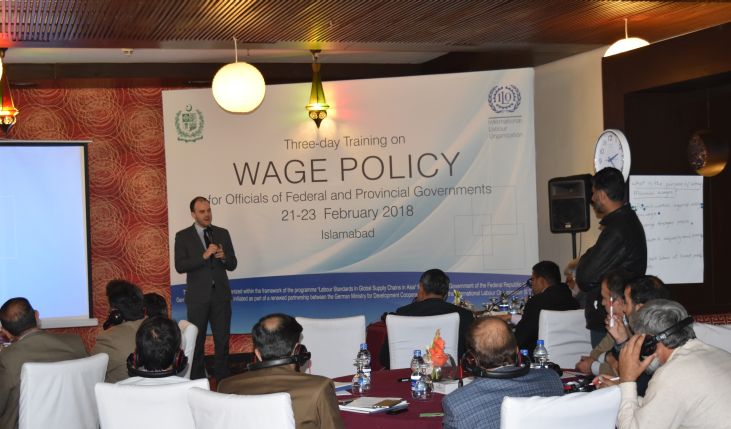 Labour standards in global supply chains: A programme for action in Asia and the garment sector in Pakistan
Skip to top