QUETTA (ILO News): Geographically, Balochistan is the largest province of Pakistan, with the least employment opportunities for youth as compared to other provinces. The Youth Labour Force participation rate for Balochistan (44.44%) has been historically lower compared to other provinces and there has been no youth employment strategy or policy over the last 70 years. This situation calls for a coherent and integrated Youth Employment Strategy to make visible impact. This was the conclusion of the Provincial Consultation on Youth Employment held in Quetta on 29th November 2017.

The Government of Balochistan in collaboration with Prime Minister’s Youth Programme (PMYP) and International Labour Organization (ILO) organized the third provincial consultative workshop on “Youth Employment Framework”. The workshop, which is part of a series of consultations across the country, was attended by the Government departments from Balochistan, United Nations’ agencies, Academia, Civil Society Organizations, Workers’ organizations, Youth-led organizations and the youth representing Balochistan.

Seven thematic areas relating to Youth Employment were discussed including :

In his remarks, the Chief Guest Mr. Asfandyar Khan, Secretary Planning and Development Department, Government of Balochistan welcomed all the participants on behalf of provincial government and congratulated Youth Affairs’ department, ILO and PMYP for organizing this workshop. Mr. Khan said that Pakistan and particularly the Balochistan province had a huge bulk of youth that needed to be taken care of otherwise this may become a threat for society. He said in the province like Balochistan where 1.4 million children are out of school and educational facilities less than desirable, there was dire need to develop integrated and inclusive youth employment strategies to address these gaps. Mr. Khan further said that Balochistan province had numerous resources and opportunities such as mineral resources, China Pakistan Economic Corridor (CPEC), Reko Diq mines, Fishery, Agriculture etc. that could be leveraged to promote youth employment. He also stated the need to improve the quality of skills and strengthening academia by ensuring linkages with industry. Mr. Khan shared that government of Balochistan was in the process of drafting sector development plans that needed to be considered when developing Balochistan’s provincial youth employment strategy.

The ILO Senior Programme Officer, Mr. Saad Gilani highlighted major issues in youth employment such as underemployment, vulnerable employment and unproductive jobs that need to be addressed. He emphasized on investing in developing policies and action plans for youth employment and to identify new avenues for Youth Employment. He appreciated the commitment shown by Balochistan government in organizing this workshop and for developing provincial youth employment strategy. Mr. Gilani said that under Pakistan’s Decent Work Country Programme (2016-2020), ILO was providing technical and financial support to ILO’s constituents (i.e. Employers, Workers and Government of Pakistan) to create an enabling environment for the creation of decent work for young women and men and would continue its support in this regard. He also indicated that the proposed Youth Employment Framework would be instrumental in achieving global Sustainable Development Goal # 8.6 which calls for halving youth, Not in Education, Employment & Training (NEET), by 2020.

ILO’s collaboration with Prime Minister Youth Programme to formulate youth employment framework is an example of on-going efforts to create decent work opportunities for youth.
In his remarks, Mr. Zulfiqar Durrani Head of United Nations’ Development Programme (UNDP) Sub-Office in Quetta, highlighted the on-going efforts of UNDP and other UN agencies in Balochistan. He appreciated the support provided by the Balochistan government and particularly the Planning and Development department to the so that the standard of young people’s lives could be uplifted. He emphasized on the need to develop a youth employment strategy for Balochistan.

Participants provided detailed feedback and inputs on the proposed Youth Employment Framework and endorsed the process for its implementation.

This was the third Provincial Consultation, after KP and Punjab. Similar consultations are planned in other provinces and regions of the country in coming months. 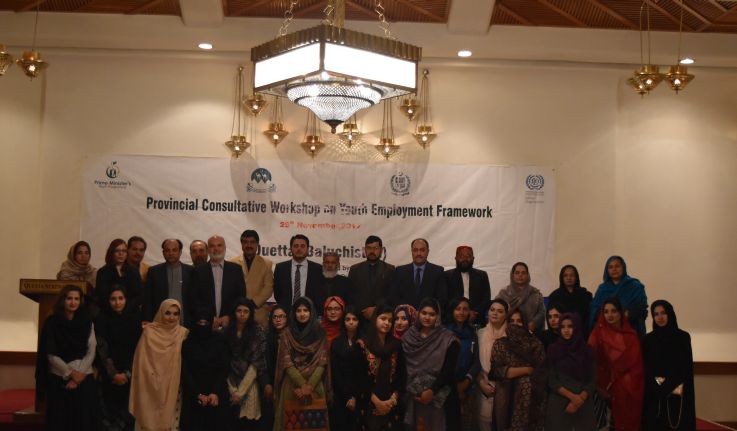