QUETTA (ILO News) : The International Labour Organization (ILO) is supporting the Balochistan government in their efforts to formulate or strengthen the labour legislation particularly in the areas of child labour, freedom of association and collective bargaining, compensation and wages, occupational safety and health and other topics concerning labour welfare. The alignment of the proposed legislation with international labour standards (ILS) will strengthen the respect for fundamental principles and rights at work.

As part of the labour legislation process, the Directorate General of Labour Welfare Balochistan (DGLWB) arranged technical consultations/ social dialogue on draft labour laws in Quetta from 9-11 October. Labour welfare, human rights, social welfare, industries and fisheries departments participated in the discussions along with the representatives of employer and worker organizations. Provincial commissioner for Children and the representative of UNICEF were also present over the last day of technical consultations. The ILO team comprising Ms. Miranda Fajerman-ILS Specialist, Ms. Ingrid Christensen-ILO Country Director for Pakistan and Mr Abid Niaz Khan-National Project Coordinator for the Sustaining GSP+ Project provided technical input to the consultations. The Balochistan Industrial Relations Act (BIRA), Minimum Wages Bill, Payment of Wages Bill, Workers Compensation Bill and Prohibition of Employment of Children Bill were reviewed in light of previous consultations, ground realities, possible challenges in implementation, ILS, and observations of ILO supervisory bodies. The technical discussions also built on plenty of written input that was provided to the DGLWB by the various trade union federations and employer organizations.

Participants expressed keen interest and made valuable inputs to the draft labour laws. Mr. Shuja ul Mulk Gichki- Director General of Labour Welfare, Balochistan promised that his office would circulate the final drafts of labour laws to the members of Provincial Tripartite Consultation Committee (PTCC) and table such laws before the law department before the end of November, 2017 after incorporating the feedback received from the PTCC members. The department of labour also committed to reframing the terms of reference for the PTCC and reconstitute it and also promised to promote the inter-departmental coordination to extend the jurisdiction of labour laws to all workers in the province as per the dictates of uniform definitions for workplace, worker and employer, introduced across all the draft labour laws.
During the closing session of the technical meeting, Ms. Ingrid Christensen, Country Director for ILO Pakistan, emphasized the need to cross-fertilize knowledge and share good practices among the provinces which stand at differing stages in terms of labour legislation. She indicated that ILO would happily support such mutual learning.

The technical discussions were arranged by a technical cooperation project funded by the European Commission with the purpose of supporting the governments in Pakistan to sustain the GSP+ facility, which was granted to Pakistan in January, 2014 for a period of ten years conditioned to better compliance and reporting of 27 UN Conventions including 8 core labour Conventions.

The 18th Constitutional amendment necessitated that all provinces enact their own laws on devolved subjects. Rational and ILS compliant labour legislation is an important means towards ensuring the protection of labour rights and ILO has been providing technical assistance and coordination to various provinces to enact labour laws, which provide deterrence against labour rights violation and thus help protect the fundamental principles and rights at work. 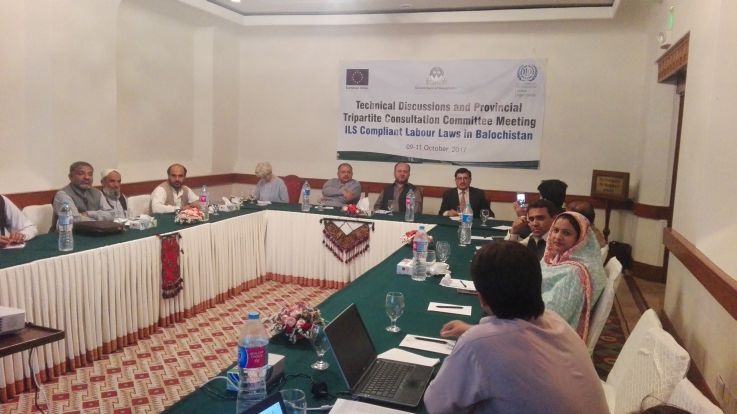