ISLAMABAD (ILO News): The project on Strengthening Labour Inspection System in Pakistan (SLISP), funded by the Dutch Government, convened a national consultation on Labour Inspection Management Information System (LI-MIS). The consultation which was attended by the federal Ministry of Overseas Pakistanis and Human Resources Development (OP&HRD), four provincial inspectorates, AJK, GB and ICT labour departments was organized to i) show case the LI-MIS of Punjab as a model for other provinces/regions and ii) explore options for increasing the use of technology based IT system for Labour Inspection and reporting.

During the opening session, Mr Suhail Aamir, Federal Secretary Ministry of OP&HRD welcomed participants and emphasised the need to promote the use of technology in labour inspection. Mr Aamir also maintained that a technology based LI-MIS could pave the way for enhanced outreach and improved quality of labour inspections by a) creating a reliable database of required information b) boosting the quality of information and reporting and c) improving compliance with International Labour Standards by bringing infringements to the fore.

Such a system can facilitate the collection and analysis of data and information which in turn can assist identification and prioritization of the areas, sectors and particular risk factors that require attention of labour inspection"


Ms Ingrid Christensen, Director of the ILO Country Office for Pakistan, thanked participants for taking part in the national consultation. Ms Christensen stated that a well-designed LI-MIS could contribute to the improvement of strategic planning, decision making and monitoring within the labour inspection machinery. “Such a system can facilitate the collection and analysis of data and information which in turn can assist identification and prioritization of the areas, sectors and particular risk factors that require attention of labour inspection”. Ms Christensen also shared some examples of development and operation of LI-MIS from other countries.

The consultation consisted of two successive parts. During the first part, Punjab’s LI-MIS was presented by Mr Daud Abdullah, Director Department of Labour (DoL) Punjab as a replicable model. Participants considered the LI-MIS of DoL Punjab a valuable source of learning and a starting point for the development of similar platforms in other provinces/regions. This session was also used to apprise the audience on the utility of LI-MIS. Moreover, the discussions outlined the lessons drawn from the development and pilot of Punjab’s LI-MIS. The Punjab Department of Labour (DoL) informed participants that embedding a plugin into their LI-MIS could help connect the current desktop based system with the android based device for real-time inspection and reporting.

Mr Muhammad Saleem Hussain, Director General Labour Welfare DoL Punjab, assured participants of his department’s fullest cooperation with all the provinces and regions by making available all possible technical support and resources that would be required to advance LI-MIS at national level.

The second part of the consultation focused on generating discussions around the key questions in a bid to identify the way forward to enhance the use of technology in Labour Inspection.

The consultation drew the following recommendations and way forward:
Mr Zishan Siddiqi, National Project Coordinator SLISP, summarizing the consultations proceedings, concluded with remarks that innovative solutions within the Labour Inspection would require the commitment of statuary institutions. Mr Siddiqi also maintained that any ambitions in this regard could only succeed by putting in place adequate institutional infrastructure at provincial and federal level. 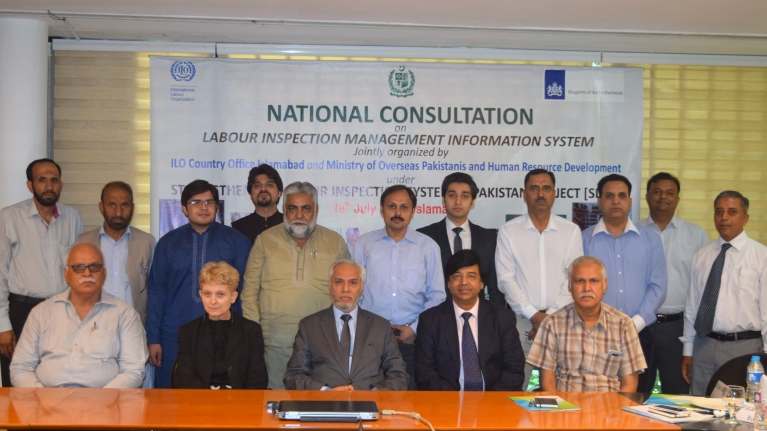