ISLAMABAD (ILO News): Pakistan’s tripartite stakeholders including Government, Employers and Workers jointly reviewed progress on Provincial labour legislation after the 18th Constitutional Amendment. Moreover, constituents discussed actions at Federal and provincial level to complete and adopt first cycle of labour legislation and subsidiary legislation as well as to ensure effective implementation and enforcement of Labour Laws. For this purpose, it was reported that the Provinces of Punjab, Khyber Pakhtunkhwa (KP), and Sindh have almost completed the present labour legislation process while Baluchistan, Gilgit-Baltistan (GB), Pakistani Administered Kashmir (AJK) and Islamabad Capital Authority (ICT) are at different levels of completing their legislations. Decision about Labour Laws in Federally Administered Tribal Area (FATA) will depend upon its merger with KP or any other course as decided by the Government.

The two-day National Consultation was organized on 17th -18th January 2017 by the Ministry of Overseas Pakistanis and Human Resource Development (OP&HRD) in collaboration with the International Labour Organization (ILO). Provincial and Regional tripartite stakeholders from the four Provinces and FATA, GB, AJK and ICT along with the Pakistan Workers Federation (PWF), Employers Federation of Pakistan (EFP), - both members of the Federal Tripartite Consultative Committee - participated. This consultation was held under the Project ‘Promoting International Labour and Environmental Standards in Pakistani SMEs (ILES)’ funded by European Union (EU).

After passage of the 18th Constitutional Amendment in 2010, it was a unique gathering of tripartite stakeholders from all regions of the countries. . A comprehensive review of the existing situation of the Provincial labour legislation, challenges in the legislative process as well as challenges in the effective implementation and enforcement of labour legislation was undertaken.

Mr Sohail Amir, Federal Secretary, Ministry of OP&HRD highlighted the role and responsibilities of national and provincial stakeholders in the formulation of labour laws, the enforcement of those and the reporting. Compliance with international safety standards and improving the OSH conditions, coordination for harmonization of labour laws as well as reporting are important areas to work on. He assured that the Ministry of OP&HRD will support all provincial and regional labour departments in drafting new labour laws, in effective enforcement and smooth reporting on their application.

Addressing the event, Dr Amaury Hoste, Head of Section, EU Delegation in Islamabad, assured EU’s commitment for compliance of international labour, environmental and human rights Conventions and the achievement of the relevant Sustainable Development Goals (SDGs). He further noted that provision of opportunities for women is also imperative. Increase in number of unionized workers, improving the OSH, strengthening labour inspection system and capacity building of institutions involved in the oversight mechanisms are other important areas for improvement. He also highlighted the importance of sustainable initiatives by different partners.

While welcoming the participants, Ms Ingrid Christensen ILO Country Director, Pakistan, highlighted the importance of International Labour Standards (ILS) as guiding principles while formulating labour laws so as to promote Decent Work. She also emphasized the need for effective implementation of labour laws at workplace level and the role of employers and workers in this process. She assured ILO’s technical assistance to the stakeholders in the development of labour laws and regulations to allow for implementation of the principles enshrined in the Conventions through national legislation, standards and guidelines, providing for the ratification of the Conventions, In post-devolution scenario, it is a unique opportunity to look back in terms of current status, opportunities, challenges, and way forward on this important process.
Mr Zahoor Awan, General Secretary, Pakistan Workers’ Federation (PWF) emphasized the need for enforcement of labour laws in accordance with the spirit of the law and international labour standards. He opined that the uniformity among provincial laws and speedy legislation process are very important aspects of the labour legislation. Unionization and collective bargaining are imperative for ensuring the decent work environment for the workers.

Mr Fasih-ul-Karim Siddiqui, General Secretary, Employers’ Federation of Pakistan (EFP) also urged for harmonization among provinces and regions for experience sharing and transfer of technical expertise and uniformity among labour laws devised by the provinces. He found it the need of the time that Governments, Employers and Workers show positive attitude for the labour welfare as that will consequently contribute to the economic development of the country.

The technical experts recommended further capacity development of the labour departments, strengthening of the Federal and Provincial Tripartite Consultative Committees, development of a time-bound action plan, strengthening of the social dialogue at provincial and regional levels, elaboration of a strategy for extending effectively the labour laws to the agriculture and informal sectors as well as to the Economic Processing Zones (EPZ), engagement of political leadership through Provincial Tripartite Committees, the need to revisit the inspection paradigm and last, but not least sensitization of all stakeholders on compliance of labour laws.

At the end it was agreed to continue the dialogue to ensure that the provincial laws are aligned with international labour standards and with economic and social policies of Pakistan.

The ILES Project is a joint undertaking of the Government of Pakistan with the support of ILO and European Union (EU) to support Enterprises and industries for better compliance with labour & environmental laws and standards. The World Wildlife Fund will be a key partner as to the environmental aspects. Over the next five years, the project will gradually expand its work to all Provinces. Small and medium-sized enterprises in the textile and leather sectors are specifically targeted for providing technical support and capacity development. 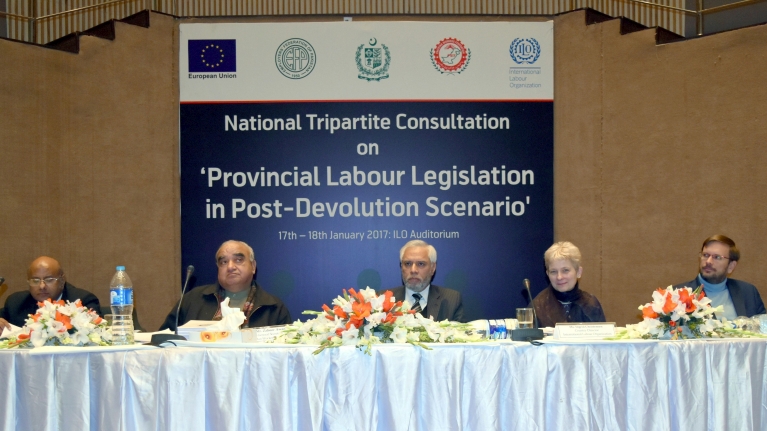