ISLAMABAD (ILO News): Over thirty high-level representatives of the Federal and Provincial Governments, Employers and Workers gathered in Islamabad on 29th April 2016 to discuss and draw consensus on the goals, components and implementation structure of the draft ”National Strategy on the Elimination of Child and Bonded Labour in Pakistan”. The national strategy was developed by the Ministry of Overseas Pakistanis and Human Resource Development with technical assistance of the International Labour Organization [ILO]. The Strategy aims to contribute to the abolition of child and bonded labour in Pakistan by providing a framework for the Federal and the Provincial Governments to reinforce coordinated implementation on their Constitutional mandate through capacity development, policy integration and mainstreaming of child and bonded labour issues and concerns into key development policies, programmes and their budgets, strengthened law and enforcement, enhancing the system child and bonded labour data collection, analysis and use, partnerships and resource mobilization and Information, Education and Communication (IEC). The also reinforces the constitutional mandate of the Federal Government and the Provinces in their efforts to eliminate child and bonded labour in a coherent, systematic and effective manner through the re-alignment of existing institutional mechanisms at Federal Provincial and District level.

Ms Atifa Raffat-Joint Secretary, Ministry of OP&HRD, commended the role and unwavering support of the ILO to the Ministry for developing the National Framework which will respond to the needs of the country within the post 18th Amendment scenario. The framework will help facilitate coordination amongst various stakeholders, ensure a more cohesive approach to the implementation of actions that progressively eliminate child and bonded labour and improve overall compliance with and reporting on for the ILO’s Core conventions which Pakistan has ratified. These include Forced Labour Convention Number 29, Abolition of Forced Labour Convention Number 105, Minimum Age Convention Number 138 and Worst Forms of Child Labour Convention Number 182 as well as other international treaties concerning the welfare and protection of children and forced laborers.

During the consultative meeting, Mr Nawazish Ali-Secretary Labour Punjab shared that the Government of Punjab had initiated a number of steps to eliminate child and bonded labour, including the new law to eradicate child labour from the brick kilns, mega projects to address child and bonded labour, enrollment of the children of brick kiln workers in schools and provision of khidmat cards to the brick kiln families who are sending children to schools.. He stressed on the importance of data on child labour in order to inform regulatory measures and appreciated that the national framework will improve monitoring, reporting and communication on child and bonded labour issues.

Mr Alamghir Khan-Secretary Labour for KP opined that the National Strategy on Child and Bonded Labour was a good step as it provided them opportunity to express their point of view which should be incorporated to make the framework implementable according to the needs of the provinces and various stakeholders.

The representative of Employer Federation of Pakistan and Chairman Workers and Employers Bi-lateral Council of Pakistan-Mr Ihsanullah, appreciated the Governments efforts of developing a national strategy stating that the responsibility of implementation lay with the Employers and Government should facilitate them as a regulator. He emphasized on public-private partnership as one of the proven ways of eliminating child labour particularly in its worst forms across supply chains.

The General Secretary Pakistan Workers’ Federation-Mr Zahoor Awan, stated that the Government of Pakistan had to face difficulties in defending its case internationally to eliminate child and bonded labour in the absence of a coordination mechanism between the provinces and the Federal Ministry of OP&HRD. He further stated that, the National Framework would help to support the Federal Government to present its case in much more effective way. Brother Zahoor Awan appreciated the efforts in and among the provinces in addressing child and bonded labour.

The ILO’s Senior Specialist on Child Labour-Ms Sherin Khan, highlighted the need for interlinkages between the components of the proposed National Framework and underscored the importance of mainstreaming child labour and bonded labour issues in concerned policies, programmes and budgets as a do-able, practical and relatively low-cost path to the elimination of child and bonded labour. She said widespread capacity development, institutional capability and broad-based partnerships, including with the private sector and civil society organizations were critical to successful outcomes from mainstreaming. In regard to statistics, she said it was important to integrate the child labour and bonded labour issues in a more robust manner in the labour force surveys and analysis as well as in child protection ones.

Representing the ILO Country Office, Ms Belinda Chanda congratulated the Ministry of OP&HRD and the Workers and Employers Organizations on reaching consensus on the elements of the National Strategy on Child and Bonded Labour and highlighted the importance of having in place a coordination mechanism that promotes accountability among various stakeholders. She said that the development of the national strategy was timely given the focus on global supply chains that the country contributes to wherein Child and Bonded Labour usually occur. Ms Chanda reiterated ILO’s continued technical and financial support to the Federal and Provincial Governments as well as Workers and Employers Organizations for the progressive elimination of child and bonded labour in line with the ILO’s 20 year association in addressing these two issues. 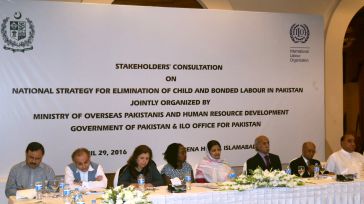