Hyderabad (ILO News): The Vice Chancellor Sindh Agriculture University, Dr. Mujeeb ud Din Memon Sehrai announced to conduct research with the students to find how the water bound disasters and mismanagement of water resources was affecting human resources in rural Sindh, which would support the provincial government in understanding the problems. He said there was need to educate the youth about the issue of water. He was speaking over a seminar organized by the Sindh Agriculture University, Tandojam in collaboration with the International Labour Organization (ILO) in Pakistan to commemorate World Water Day with the theme “Better Water, Better Jobs”. The United Nations has declared 22 March as the World Water Day (WWD) in order to magnify the international focus on water related issues and to inspire people and organizations to think about the link between the Water and Jobs. The ILO Director General, Mr Guy Ryder, who is the ex-officio chair of the UN-Water Secretariat launched the World Water Development Report (WWDR) on the same day in Geneva. The Vice Chancellor of the Sindh Agriculture University chaired the seminar that was participated by more than 250 people including water sector researchers, experts and the think tanks, deans of various faculties, civil society activists, media personnel, students and the rural communities of Sindh.

While referring to the WWDR, the ILO Project Coordinator, Abid Niaz Khan explained the horrendous joblessness created in the Sindh province due to sea intrusion, over exploitation and mismanagement of the mangroves and wetlands, the menace of water logging and salinity, inability of the public sector to provide clean drinking water and the sanitation services to the rural and urban populace, the depletion and contamination of ground water resources and no public investment in building water reservoirs. He further informed that by investing in water sector infrastructure and improvement many direct and numerous indirect jobs can be created sustainably. Mr Abid also informed about the One-UN Livelihood Restoration Project that responded to 2010 floods and was implemented jointly by the ILO, FAO and UN Women. As part of its livelihood protection strategy, the project supported the improvement of water courses and the irrigation infrastructure through labour intensive methods. These initiatives improved the irrigation efficiency, bettered the drainage system, created short term employment for the poorest peasant communities and sustainably improved their income levels through increasing their agriculture and livestock productivity.

Mr Irshad Ahmed Bohyio, General Manager, WAPDA South (Water & Power Development Authority) said that “Despite the fact that per capita access to water has decreased from 1500 cubic meter a decade ago to 1000 cubic meter now, Pakistan still is a water surplus country. We have to recognize the importance of water because our mismanagement of water resources has resulted in Pakistan’s inclusion into the list of water scarce countries”.

Mr Nazeer Essani, General Manager, SIDA (Sindh Irrigation & Drainage Authority) admitted that inefficiencies in the irrigation system as well as the poor drainage of saline water are resulting in the increased water logging and salinity, thus reducing the on-farm employment opportunities for the farming communities.

The Vice Chancellor who is ex-officio member of the agriculture policy task force also highlighted that the impact of water bound disasters has, over the last five years, adversely affected Sindh Province of Pakistan resulting in poor income and vulnerable livelihoods. Sindh was the most severely affected province of the 2010 floods with close to 970,000 households suffering agricultural losses estimated at USD 2,301.6 million. He pledged his university’s support in incorporating the following recommendations, drawn on the basis of the known challenges that Sindh confronts on the water front, into the agriculture policy, which is in the drafting stage: Others who spoke over the seminar included: Mr Ali Akbar Rahimoon, CEO, AWARE Thar (Association for Water, Applied Education & Renewable Energy), Mr Mustafa Ujjan, Director NARA Canal Area Water Board, Prof. Dr. Muhammad Saffar Mirjat, Dean (Faculty of Agriculture Engineering) and Mr Ghulam Mustafa Abro (Ex-Chief Economist, Government of Sindh).

The seminar was organized under the One-UN Livelihood Restoration Project being implemented jointly by the International Labour Organization (ILO), Food and Agriculture Organization (FAO), and UN-Women. The project is funded by UN Trust Fund for Human Security (UNTFHS) and steered by the Sindh government through a project steering committee set up for the purpose in the P&D department. 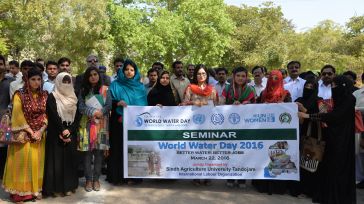