The “Music against Child Labour” Initiative calls upon orchestras, choirs and musicians of all genres worldwide to dedicate, between October 2013 and the end of 2014, one concert in their planned repertoire to the struggle against child labour.

Pilar Jurado, one of the most well-known figures of European classical music is, as well as being a soprano singer, a composer and director of orchestra, and she is considered as “the muse of contemporary artistic creation.” Her versatility has enabled her to take on many different challenges, both in terms of interpretation and composition, and she has performed on some of the most prestigious stages of the world, together with first-class orchestras, such as the Helsinki Philharmonic Orchestra, the Orchestra of Radio Television of Greece, the Spanish National Orchestra, etc. She has bowed to the baton of important directors, such as Giuseppe Sinopoli, Arturo Tamayo or Pedro Halffter, among others.

Pilar Jurado is a special partner of the ILO Spain Office and the International Programme on the Elimination of Child Labour (IPEC).

25th anniversary of the partnership between AECID and the ILO

AECID and the International Labour Organization are coming together to celebrate the results of joint work carried out over the past 25 years, which has revolved around the Decent Work Agenda and, in particular, the elimination of child labour.

At the place where the concert will be held, part of the exhibition “The ILO’s fight against child labour” will be on display. Thanks to the support of ADIF, the full exhibition will be on display at Madrid’s “Puerta de Atocha” railway station, between the 22 December and the 5 January. 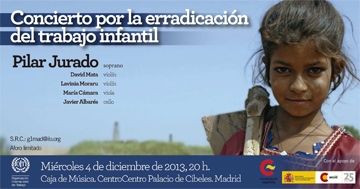