In accordance with the endorsed project plan, the ENHANCE project will cooperate with MOLISA and all relevant agencies to conduct the World day against Child labour (WDACL) activities. The theme and slogan of the year 2017 is: “In conflicts and disasters, protect children from child labour.” WDACL is a great chance to raise awareness and promote media coverage on the issue of child labour, to call for activities and to reduce the impacts of conflicts and disasters on the lives of affected children. This also is a step forward in promoting the SDG 8.7 in Viet Nam.

Viet Nam is a country with a monsoon tropical climate with a large coastline of more than 3000 km. It often faces many natural disasters such as storms, floods, droughts, cyclones, vortices, and landslides, which have caused casualties and properties damage. In addition, Viet Nam is one of most vulnerable countries to face the effects of climate change. Global climate change has increasingly worsened disasters in Viet Nam as storms become more frequent and unpredictable.

To promote WDACL in Viet Nam, ILO will collaborate with MOLISA,  UNICEF and relevant agencies, which will carry out activities focusing on the theme of protecting children from child labour in regards to disasters.

The main objective of this campaign is to raise community and interagency awareness on child labour especially on the impact of natural disasters to the vulnerability of children at risk for child labour.

1.      Organize a multi agencies advocacy workshop to discuss about the impacts of natural disasters and climate change on child protection, especially child labour

2.      Develop a video clip and an audio clip to raise awareness on child labour and broadcast on national and provincial radio and television channels including engaging communities and organizations on social media including youtube during the week of WDACL.

3.      Develop a documentary film about the impact of natural disasters and climate change on child labour, child protection and to call for preventitive action. The film will be showed on national and provincial television and on social media. 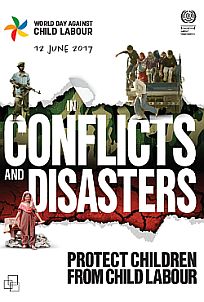