1. Unemployment rate in Viet Nam is less that 2 per cent while it is double digit figure in many developed economies. What is the reason for this difference?

2. What is the limitation of using unemployment rate as an indicator of the economy for developing countries like Viet Nam?

The limitation of using the unemployment rate in developing countries such as Viet Nam is that it does not reflect fully the labour market situation. In these countries, there is a lack of decent and productive work, which results in various forms of labour underutilization such as high underemployment and low earnings and productivity. In this regard, monitoring the labour market in developing countries such as Viet Nam should include indicators that reflect the quality of employment. This includes the working poverty rate, vulnerable employment rate, informal employment rate, agricultural share of employment, labour productivity and average wages, for example. 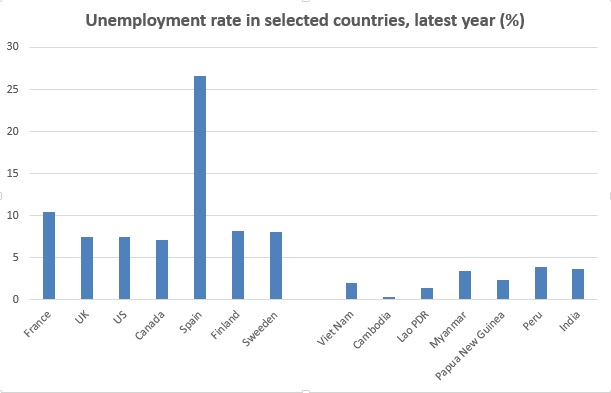 3. What explains why unemployment rate falls while many enterprises go bankrupt or dissolve and are not yet able to fully recover after the economic crisis? Also, the number of newly established enterprises in the first 8 months of this year was only 44,500 compared to 47,500 closed down.

In the 2nd quarter of 2014, unemployment decreased on an annual basis as the growth in employment (436 thousand) outpaced labour force expansion (273 thousand). However, it’s important to note that there was a contraction in the number of employers (-208 thousand) which was offset by a rise in wage workers (453 thousand). This partly reflects the complexity of Viet Nam’s economy and labour market. While some enterprises are facing challenges, other companies are faring better and able to hire more employees. However, some redundant workers who are unable to find new wage employment are returning to their households and working as unpaid family workers. In this regard, stronger employment services and labour market information would help Vietnamese jobseekers during these times of rapid economic change.

4. What are the major problems of Viet Nam's labour market?

Viet Nam’s labour market has made significant progress in recent decades, as reflected in higher wages, steady decrease in agricultural employment, and stronger labour laws and institutions. Despite its formidable progress, nearly half of Viet Nam’s workers are still employed in agriculture where productivity and incomes are low. Around three in five workers are in vulnerable jobs where working conditions are typically poor. Overall, productivity and wages are relatively low compared to some ASEAN economies such as Malaysia, Singapore and Thailand. In this regard, continued efforts are needed to enhance the country’s labour legislation, improve compliance with laws, and strengthen industrial relations system and skills development institutions.

5. What are the opportunities and challenges for Viet Nam's labour market in terms of its demographic bonus? What should be done to seize those opportunities?

Viet Nam’s demographic bonus reflects sizeable growth in its working-age population and declining dependency ratio. If it can create enough high-quality jobs to meet the supply of its expanding labour force, Viet Nam can accelerate economic growth while also addressing gaps in the labour market. To this end, macroeconomic stability and stronger labour market institutions would help create a conducive business environment, attract investment and stimulate demand. In addition, strengthening the quality of education and training and employment service providers would help Vietnamese workers and jobseekers meet the demand of business and industry and seize new and better job opportunities.