Beyond the usual sound bites and press statements, there is a danger that the mining industry might have gone numb, unfeeling and almost unresponsive, to the avalanche of mining deaths in the mining industry. These sound bites and press statements, by governments and mining companies referencing both public and private policy statements seems at odds with the reality experienced by mine workers and society.

Several geographically dispersed calamitous events around the world in the mining industry have focused the attention of the world on health and safety on the global mining industry. The dramatic rescue of 33 trapped miners from the depths of a mid-sized copper mine in Chile, the gruesome deaths of 29 miners at the Pike River coal mine in New Zealand, the death of 29 miners at the Upper Big Branch mine in the state of West Virginia, Mexico, Turkey, Pakistan, China, Afghanistan etc. come to mind.

Beyond these calamitous events, almost hidden from the world, mineworkers continue to die in the course of their work from a slow painful and imminent death resulting from occupational diseases. The re-emergence of black lung disease recently, a disease proudly proclaimed by the mining industry as a disease of the past - completely eradicated from the face of the earth - is an indictment on the industry, confirming the lack of meaning in their sound bites and press statements.

Though the adoption of The Safety and Health in Mines Convention, 1995 (No.176) by the International Labour Organization (ILO), was a welcome development, with a concomitant decrease in the rate and frequency of fatalities in the mining industry, a worrying upward trend in fatalities is emerging, with Pakistan and China as the epicenter of this upward trend. South Africa, another important mining country indicator of occupational health and safety performance has seen a downward performance trajectory in mining fatalities in the recent past.

The Safety and Health in Mines Convention, 1995 (No.176) is central to achieving the ILO’s decent work agenda and a decent future of work, and is the key to resolving the challenge of occupational safety and health in the mining industry. Global Trade Union strategies on Occupational Health and Safety have proven to be effective contributors to the achievement of the decent work agenda of the ILO and they stand ready to contribute to the future of work. Global trade unions have proved that “Trade Unions Save Lives” with their strategic approach to occupational health and safety in the mining industry. These global trade union strategies are best guarantors of the future of work agenda with their insistence on the link between occupational health and safety and sustainability underpinned by the “Just Transition” concept.

The resolution of the inherent tension engendered by the future of work imperatives such as accelerated technological advances, as in industry 4.0 or the Internet of things (IoT) that best describe the future of work must of necessity be resolved by considering the impacts of the future of work on workers, their families, and the communities that depend upon them. A trade union proposal exists to address the implications of new technologies for labour – the Just Transition concept. This must become central when policy options are adopted by governments on the question of the implementation of new technologies and the mitigation of their social impacts, particularly in the mining industry.

Trade Unions have an organic relationship with workers, who are mostly alienated from the production process in a globalised work environment – an alienation that is likely to become more acute as Industry 4.0 transformations play out. The intimate relationship that workers have with the trade unions facilitates the critical role played by trade unions in health and safety in the workplace, the decent work agenda and the future of work. The Institution of Occupational Safety and Health (IOSH)’s global study on “The role and effects of representing miners in arrangements for safety and health in coal mining”, confirms the critical importance of workers’ voices and influence on employers’ arrangements for their safety and health.

The comparative study, led by Professor David Walters from Cardiff University, and assisted by a team of researchers that included Professor Katherine Lippel from Canada, Professors Michael Quinlan and Richard Johnstone from Australia, and Professors Syamantak Bhattacharya and Phil James and Dr Emma Wadsworth from the UK, provided strong evidence for the correlation between effective workers` representation and high standards of health and safety performance.

This is a very most welcome and overdue validation by evidence based research that trade unions save lives and play a critical role in health and safety education and training and awareness raising. Within the context of ILO Convention 176 it is the trade union that ensures that the health and safety rights inherent in the Convention are upheld and realized; and that management is held accountable in respect of its obligation under the convention. This puts further emphasis on the importance of global ratification and implementation of the Convention.

The study is an important contribution to the body of scientific research work that proves that trade unions do make a difference in mine safety – what is referred to as the trade union safety effect.


The Importance of Health

Despite many expert assessments that occupational diseases kill far more workers than accidents, it is the sudden, violent accidents that attract attention most of the time in the occupational health and safety field. This is particularly evident when a major catastrophe occurs that kills larger numbers of workers at one time.

Jukka Takala and his associates have several times and in several papers made the point that occupational diseases kills as many as four to five times the number of workers that accidents kill. These diseases include the full range of chronic and acute maladies that result from work, from organ failure to systemic toxicity to cancer. The problem of identifying these diseases definitively is complicated by the lack of a clear cause-and-effect picture for most of them; particularly in those where a significant latency period may be the norm.

The trade union movement has long demanded that occupational diseases be better recognized (and compensated). The medical profession, and the sciences of toxicology, ergonomics, and industrial or occupational hygiene have not reliably taken up the workers’ cause, however.

A bit of history: the occupational hygiene (aka industrial hygiene) field, and to a lesser extent the other occupational health sciences, exists principally because of the demands of the trade union movement, particularly in the 1970s, for a greater professionalization of the field of occupational health and safety. Up until then, most "safety professionals" were burnt-out managers given the title of safety manager to tide them over until retirement. Trade union demands led to the creation of industrial hygiene schools at many universities and colleges.

Unfortunately, despite effectively owing their careers to the trade union movement and having professional codes of ethics that make reference to worker health being their primary duty, it is frequently the experience of workers that a majority of occupational hygienists, once hired by industry, swiftly transform into industry hacks and apologists.

Hiding behind specious claims of confidential business information, workers are still denied full knowledge of the hazards of the substances they work with. Despite disclosure laws such as the Globally Harmonized System guaranteeing material safety data sheets, labels, and the like the truth of the matter is that this (when it is complied with) only guarantees the provision of specific information in specific categories, and only when that information is known. This last point is the most problematic: of the 200,000 or so chemicals in widespread industrial use, substantive and reliable human health information exists for only about 1,000.

Demands that this situation be rectified have been met with strong resistance from the chemical industry.

The ILO might provide an avenue to push hard for a meaningful "right-to-know". We must also insist - absolutely - that no risk assessment is legitimate unless those facing the risk have participated meaningfully in the risk assessment process. By meaningful participation, the labour movement means that workers must have the deciding vote or voice.

In conclusion, the big problem of occupational diseases is that they are widely under-diagnosed, misdiagnosed, contested, concealed, and denied. The general level of cooperation that trade unions receive from employers to properly investigate suspicions of occupational disease is approximately zero. The information is often simply unavailable, and the link between exposure and disease is almost always contested. Employers control the amount and quality of information, and governments have abandoned their role as regulators and enforcers in many jurisdictions. A well-written ILO Code of Practice on occupational hygiene could be beneficial to workers. However a badly-written one would actually set us back.

That is why the three principle rights of workers in occupational health and safety are considered to be:

Occupational death is by definition needless. No worker should be asked to trade her or his health for a job. That is the principle that has guided the trade union movement from its earliest days, and it is the same principle that guides it today. 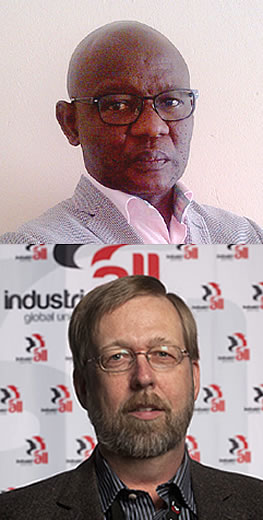