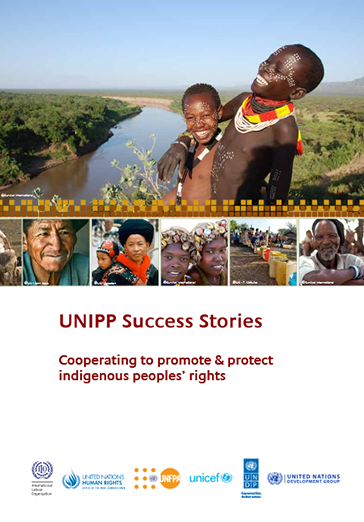 Download:
The United Nations-Indigenous Peoples Partnership (UNIPP, the Partnership) was launched in May 2011 in New York and has since been put into practice through six joint country-based projects (in Bolivia, Nicaragua, Cameroon, Central African Republic, Republic of Congo and Nepal) as well as one regional project in South-East Asia.

The Governments of Denmark, Finland and Ireland have collectively contributed an estimated US$ 1.7 million to UNIPP. Of this figure, more than 87 per cent has been allocated to the six joint countrybased projects.

In all the target countries, UNIPP has succeeded in raising the profile of indigenous peoples’ issues. It has underscored their importance, firmly establishing them on the development agendas of governments and UN Country Teams (UNCTs), through a combination of technical, policy and legal advice as well as advocacy and support to consultative mechanisms involving indigenous peoples.

Working together and getting results for indigenous peoples