The end of AIDS begins in the workplace

The ILO is a powerful agent for transforming our society to make it better.

This campaign, VCT@Work is not just an initiative that will bring VCT to 5 million people by 2015 and make testing tools available so that people know their status. It is about social justice. It is about redistributing opportunity. It is about refusing exclusion. It is about making sure that innovation, science and discovery are able to reach people without a voice.

No other organization in the UN system has the capacity of ILO to reach 3.2 billion workers across the globe - and each worker is linked to five or more other people. So we can really talk about universal access. We can talk about making sure that we will fill the gap that exists today between people who have and people who don’t.

I want to thank Guy Ryder, not only for his activism and leadership as Director-General of the ILO, but for joining us in creating historic social change. And that is what we are doing today.

It is important to have Françoise Ndayishimiye with us today as the first speaker for this important event. She has reminded us how our progress in recent years has given hope to the lives of millions of people living with and affected by HIV. Twenty years ago, we were hiding. We were scared. We did not have any access to medicine. Only the privileged few could get treatment, because the drug costs were $15,000 per person, per year. No one believed that we could bring lifesaving medicines to African people. They were even telling us not to put treatment goals into the General Assembly’s 2001 Declaration of Commitment on HIV/AIDS because they believed Africans would not be able to adhere—the protocol was too complex and we would have drug resistance.

But we have the proof that they were wrong. After 20 years, Françoise is here because she started with a simple, but so important action—testing. Knowing her status. Without the courage of those people who decided to find out their status, we could not have brought this social change.

AIDS is one of the only movements that had the strength of civil society behind it from its earliest days, making social change happen. That is why the price of treatment has fallen from $50,000 per person per year to $80 per year.

Testing created a demand for treatment—millions of people were asking for life-saving medicines. And that enabled Africa to scale up from 50,000 people on treatment a decade ago to more than 7 million today.

Even more important are the 7 million people living with HIV in urgent need of access to life-saving treatment. Their numbers will only increase as new treatment criteria are introduced. Their lives are hanging in the balance.

We need to tell them that HIV is no longer a death sentence. They must know their status. The days when they had to hide are over. HIV is a chronic, treatable disease, and treatments are becoming less toxic.

It is so important that we fight for the 5 million by 2015 goal of VCT@Work. Because today science is showing that if you put people on treatment early, you can reduce their risk of transmitting the infection by 96%. This eliminates the dichotomy between treatment and prevention. Today, knowing your status and having access to good treatment is an act of protection for your partner.

This is one of the best initiatives I have seen. It will help us take out of the shadows the people who live in silence and shame and in fear of discrimination—because of their status; because of their sexual orientation; because of who they love or who they are. These people need services. They are human beings, and we need to be sure that they are part of the change we are proposing today.

This is such an important partnership for UNAIDS. ILO is engaged with three key partners, whose representatives are all at the table today: governments, employers and workers. I know you will work with us to leverage the workplace as a platform to encourage employees to get tested and make sure treatment is available.

More than that, when we talk about the private sector, we must consider how they can contribute to the innovations we need to make this campaign work. We must push for new ideas and advances that will democratize access to services for poor people.

This testing initiative should not be limited to HIV. We must take advantage of this platform to make other testing services available. I visited a site in South Africa with President Zuma where we could find out in three or four minutes if we were deficient in iron, if we were HIV-positive, if our blood pressure was too high or if we had a sugar problem. Health status screening could be part of workplace VCT programmes too.

Not a dream—but a right

Some people still think the end of AIDS is just a dream. But I am a dreamer. Once I was a boy who went to school without shoes; today I am standing before you as Executive Director of UNAIDS. If I did not dream, what could have brought me here?

I believe that ending AIDS is not a dream, but a right. It is something we should all fight for. No one should get sick and die because he or she does not have access to treatment.

Today in the developed world, they are telling me to stop talking about ending AIDS, but I will not stop. I know that in most of the developed world, people are not dying of AIDS anymore. That is why I do not talk about ending HIV—but ending AIDS, so people living with HIV will no longer get sick and die. So that people like Françoise will stay healthy, will have a job, will raise and educate their children, and will continue to have a life like you and me. That is ending AIDS.

Many people think that ending AIDS will only happen in the laboratory, through scientific research. But I think this initiative will show that the end of AIDS will begin in the workplace.

UNAIDS
The Joint United Nations Programme on HIV/AIDS (UNAIDS) leads and inspires the world to achieve its shared vision of zero new HIV infections, zero discrimination and zero AIDS-related deaths. UNAIDS unites the efforts of 11 UN organizations—UNHCR, UNICEF, WFP, UNDP, UNFPA, UNODC, UN Women, ILO, UNESCO, WHO and the World Bank—and works closely with global and national partners to maximize results for the AIDS response. Learn more at unaids.org and connect with us on Facebook and Twitter. 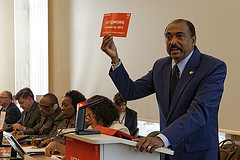