On 17 July 2019, the ILO, in partnership with the Peace Building Support Office (PBSO), held a Centenary event on “Jobs for Peace” on the margins of the High Level Political Forum (HLPF) in New York. The event, which was organized with the support of the Federal Department of Foreign Affairs and the Permanent Mission in New York of the Swiss Confederation, was opened by the ILO Director General, Guy Ryder, and the Permanent Representative of Switzerland to the United Nations, H.E. Mr. Jürg Lauber.

In his opening statement, Mr. Ryder highlighted the considerable efforts and progress made by many countries and the international community in meeting the Sustainable Development Goals. Nevertheless, he observed that “today more than 2 billion people are still living in fragile and conflict affected situations, where poverty and inequality are increasingly concentrated. Given the risks posed by a changing climate, scarce natural resources, protracted conflict and rather low levels of human development, this number is unfortunately likely to rise unless communities worldwide build their resilience and work together for the consolidation of peace.”

The ILO was founded 100 year ago, as part of the Treaty of Versailles that ended World War I, under the motto “if you want peace and development, work for social justice”. It is no less certain today than in 1919 that lasting peace and stability must be built on a foundation of sustainable development and social justice. The adoption by the ILO International Labour Conference of Recommendation No. 205 on Employment and Decent Work for Peace and Resilience in 2017 represents a unique normative framework, a milestone, for the world of work in conflict and disaster settings. At the last Centenary International Labour Conference, in June, the relevance of the ILO in the humanitarian, development and peacebuilding nexus has been re-emphasized through the ILO Centenary Declaration for the Future of Work. The Declaration recognizes that “persistent poverty, inequalities and injustices, conflict, disasters and other humanitarian emergencies in many parts of the world constitute a threat to those advances and to securing shared prosperity and decent work for all.” 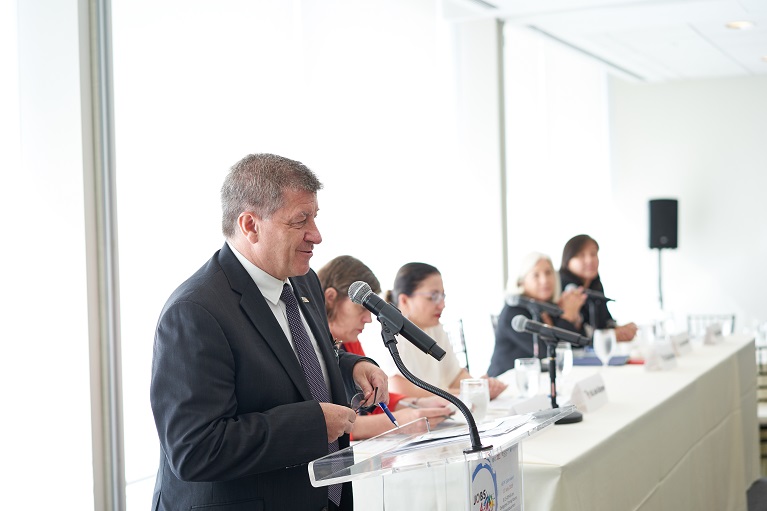 The ILO Director General, Guy Ryder, makes his opening remarks at the Jobs for Peace event in New York.
Mr. Ryder called for international communities, regional organizations, national and local governments and institutions, and social partners, to keep working together to develop Decent Work policies and programmes to address conflicts and disasters. Tangible peace dividends that leave no one behind need to be promoted along with longer-term investment in the world of work and the creation of an enabling environment for sustainable socio-economic reintegration and crisis prevention.

Mr. Lauber recognized the ILO/PBSO/Switzerland partnership as a successful initiative to reinforce the knowledge around the role of decent work and employment in the humanitarian-development-peace nexus. In the quest for creating peaceful and inclusive societies, decent work and economic growth are key priorities. Such joint initiatives, linking the implementation of SDG 8 and SDG 16, hold the promise of peace taking hold in the long-term. He announced the launching of the new ILO Handbook “How to design, monitor and evaluate peacebuilding results in jobs for peace and resilience programmes” and its usefulness for mainstreaming peacebuilding results into employment programmes and for highlighting the contribution of employment to peace. The Handbook also illustrates the results that can be achieved by linking the expertise on different topics between Geneva and New York.

Among the invited speakers were Ms Sevil Alirzayeva, Chief of office of the under-Secretary-General of the United Nations Counter-Terrorism Office, Ms. Barrie Lynne Freeman, Director and Deputy Head of PBSO, Ms. Katy Thompson, Team Leader ai, representing UNDP and co-chair of the Inter-Agency Working Group for Disarmament, Demobilization and Reintegration (IAWG DDR), and Ms. Mito Tsukamoto, Chief of the Development and Investment Branch of the Employment Policy Department of the ILO in charge of the Jobs for Peace and Resilience Flagship Programme. The different panelist highlighted the importance of livelihoods and jobs to prevent violent extremism and the importance of offering positive alternatives and socioeconomic opportunities, especially for youth. The partnership between the ILO, the World Bank and the United Nations Development Programme (UNDP) on employment and peace, which in 2016 resulted in a joint statement on the need to strengthen the peacebuilding impact of employment interventions, was also mentioned. This partnership also led the ILO and the PBSO to reinforce their cooperation on employment creation in conflict-affected situations through a project aimed at sustaining peace and fostering development supported by Swiss Federal Department of Foreign Affairs.

Highlighting the important role that the ILO continues to play in the world of peacebuilding - giving a voice to government, workers and employers alike - since its foundation in Geneva, Ms. Tsukamoto shared the dire need, now as it was then, to take action. With poverty increasingly concentrated in fragile settings and projected to rise from 17% of the total population today to almost 50% by 2030, and with 70 million worldwide in displacement due to violence, war and persecution , we cannot let this become the normality. However, she observed that empirical evidence on the role of employment in peacebuilding continues to remain scarce, and employment is often considered only as a secondary priority in peacebuilding contexts, when in reality it can be the key to addressing the drivers of conflict, as mentioned in the Joint Statement, such as lack of opportunity, particularly for youth and women, lack of contact and interactions across different social groups, and existence of grievances over inequality and social injustice.

The ILO has been working at the humanitarian-development-peace nexus, and continues to advocate the need to focus on longer-term employment intensive investments, which should already be introduced during the humanitarian phase in order to set the basis for more sustainable, productive and inclusive decent employment, providing social cohesion for rebuilding broken communities, increasing prevention and strengthening resilience to future shocks. In this framework, and with the intention to build better empirical evidence, the ILO published the Handbook “How to design, Monitor and evaluate peacebuilding results into Jobs for Peace and Resilience Programmes” with the support of other development partners, to develop, implement and build further evidence on integrated employment schemes that contribute to peacebuilding processes.

In conclusion, Ms. Tsukamoto stressed the need to further strengthen collaboration between development partners to highlight the potential of employment programmes that contribute to inclusive and productive structural transformation and bridge the humanitarian-development divide, not only to create sustainable decent employment and livelihoods, but also to strengthen local ownership and institutions, and to build more resilient and inclusive societies. 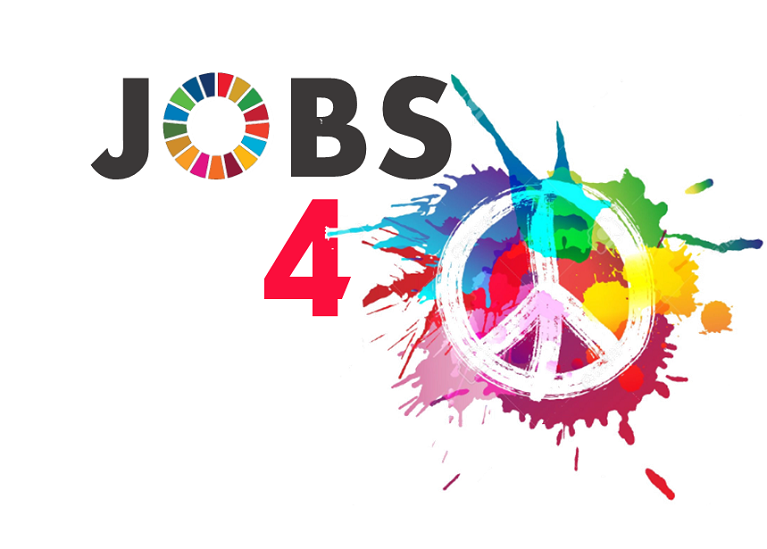 ILO Centenary Declaration for the Future of Work [pdf 311KB]

How to design, monitor and evaluate peacebuilding results in Jobs for Peace and Resilience programmes [pdf 1430KB]
Skip to top