The event was opened by Deborah Greenfield, the ILO Deputy Director-General for Policy, who in her remarks emphasized the newly emerging significance of cooperatives and the social economy for sustainable development, inclusion, and employment creation. She mentioned how evidence can be found in access to finance, formalization of the informal economy and promotion of gender equality. Ms Greenfield affirmed that cooperatives and social economy should be considered among key actors within the future of work discussions.

In his introductory remarks, the Director of the ILO’s Enterprises Department, Vic Van Vuuren emphasized the value proposition that cooperatives and the social economy can bring to the future of work. The intention of this emphasis is not to replace the existing model, but rather to complement and support it by providing a viable alternative. Mr. Van Vuuren called for scaling up efforts with new evidence to reach wider audiences for increased buy-in and demonstrating impact.

The first speaker, Trebor Scholz, an associate professor at the New School, New York, pointed out that work is increasingly being performed within the “gig economy”, moving away from direct employment relations to freelance arrangements, including through digital platforms. In fact, as many as one fourth of Americans say they have earned some income through these platforms. While these platforms provide some benefits, particularly to those in-between jobs, there are challenges related to them, including deterioration of workers’ rights and benefits, as well as the wider phenomenon of “commodification of everything”. Platform cooperativism, which is getting stronger particularly in Europe and North America, can provide a part of response to this, said Mr. Scholz. They provide alternatives for diversifying the digital economy, not by aiming at destroying the corporations but to complement and coexist with them. Some examples of these democratically-governed platform cooperatives include the Green Taxi Cooperative in Denver, USA, and Fairmondo, a consumer-owned platform market place originating from Germany.

The second speaker, Gianluca Salvatori, the Secretary General of European Research Institute on Cooperatives and Social Enterprises (EURICSE) shared the Italian example of mainstreaming cooperative enterprise model in the wider economy. Italy has over 50,000 cooperatives employing more than 1.7 million people, more than half of whom are women. Mr. Salvatori emphasized particularly the resilience of cooperatives during economic downturn. The Italian example during the previous recession shows how cooperatives function countercyclically, increasing their turnover and number of jobs, while other enterprises shrink. Cooperatives are, and continue to be, relevant across economies. In the future of work they have a particular potential to become key players in sectors where automation cannot replace the human contact, such as care and welfare. At the same time, the enterprise solutions will need to be based in the needs of local communities, providing a real bottom-up alternative. Cooperatives, according to Mr. Salvatori, are well-aligned with the decent work agenda, aiming to create long-term impact on people’s lives and economies at large. Mr. Salvatori called for increased research particularly on legal and policy frameworks for new types of cooperation.

As discussant, Uma Rani Amara, a Senior Economist of the ILO’s Research Department, brought up the role of cooperatives for the developing economies. She pointed out how cooperatives have traditionally emerged in situations where state has been unable to provide the response required by the people, for instance in support for financial access, housing, or livelihoods. Cooperatives are known to pay good wages and provide decent working conditions to those working in them. Ms Amara highlighted how cooperatives particularly appeal to people due to their ability to provide a structure, an avenue for formalization, economies of scale and negotiation power. She shared an example of a successful women’s cooperative in India, SEWA, which has successfully improved livelihoods of close to two million women members over the decades.

The lively discussion from the audience on issues such as regulatory frameworks for cooperatives, governance challenges and coop-trade union relations reconfirmed the relevance and importance of the topic for further exploration. The ILO will continue its active engagement on this topic in close coordination with its constituents and in partnership with the cooperative movement. 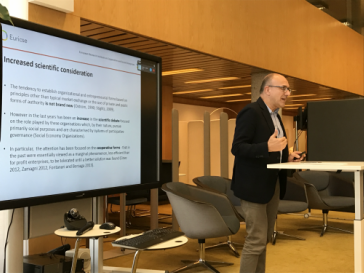 Cooperation in a changing world of work: Cooperatives and the Social Economy in the Future of Work

No.6 Cooperation in a changing world of work: Towards a cooperative future [pdf 316KB]

Cooperation in the Future of Work
Skip to top