On 19 July 2022, the Government of Japan deposited with the International Labour Office the instrument of ratification of the Abolition of Forced Labour Convention, 1957 (No. 105), becoming the 177th ILO Member State to ratify this Convention.

Convention No. 105 is the eighth fundamental Convention ratified by Japan which requires States party to suppress and not to make use of any form of forced labour. This ratification is a testimony of Japan’s strong commitment to protecting fundamental principles and rights at work, including combatting forced labour in all its forms.

In depositing the instrument of ratification, H.E. Mr. Yamazaki Kazuyuki, Ambassador Extraordinary and Plenipotentiary and Permanent Representative of Japan to the United Nations Office and Other International Organizations in Geneva, stated: “I am very pleased to have this opportunity to deliver the instrument of Japan’s ratification of the Convention on the Abolition of Forced Labour. In order for Japan to ratify the Convention, it was necessary to amend the relevant domestic laws, including legislation on government employees. The Diet, therefore, made the necessary changes to the relevant laws last year, creating an environment conducive to ratification. In this process, the government of Japan also worked to enhance our cooperation on labor issues with our social partners. This ratification demonstrates Japan’s strong commitment to complying with international labor standards. We also believe that our ratification of the Convention will contribute to advancing international efforts for the abolition of forced labor. Japan has doubled its voluntary contributions to field operations that strengthen compliance with international labour standards in recent years and will contribute a further US$15.1 million toward them this year.”

Receiving the instrument of ratification, Mr Guy Ryder, Director General of the International Labour Organization, stated: “Japan is a valued partner in the promotion of social justice and decent work, especially in Asia and the Pacific. By ratifying Convention No. 105, the Government of Japan reaffirms its continued commitment to respect, promote and ensure fundamental principles and rights at work. Convention No. 105 is one of the key international standards with the objective of eradicating forced labour practices which constitutes a matter of particular urgency as the ILO’s global estimates demonstrate. I am therefore very pleased to receive this instrument which is an important move towards universal ratification of the forced labour Conventions and the realization of 2030 UN Sustainable Development Goals, more specifically SDG target 8.7.”

Convention No. 105 will enter into force in Japan one year after the instrument of ratification was deposited with the ILO.

To date, Japan had ratified 49 Conventions (of which 33 are in force). 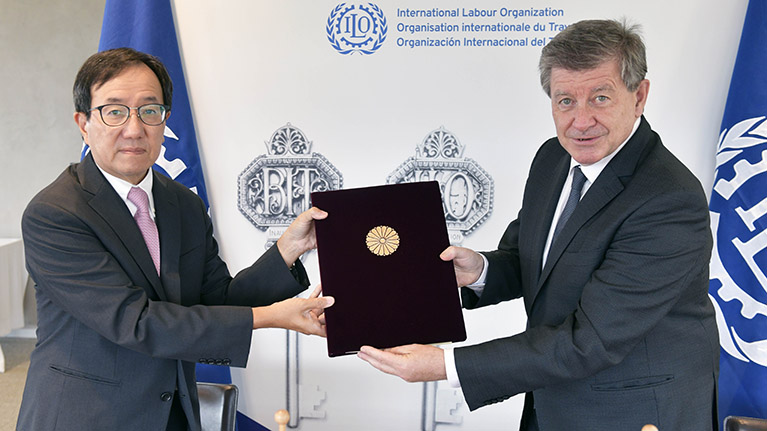