On 26 May 2021, Saudi Arabia deposited the instrument of ratification of the Protocol of 2014 to the Forced Labour Convention, 1930, becoming the fifty-second country worldwide and the first among members of the Gulf Cooperation Council to ratify this instrument. With this ratification, Saudi Arabia is demonstrating its firm commitment to combating forced labour in all its forms, including human trafficking.

Overwhelmingly adopted during the 2014 International Labour Conference, the Protocol reinforces the international legal framework for combating forced labour. It commits States to take effective measures to prevent forced labour, sanction its perpetrators, and protect its victims and ensure their access to justice and remedies.

According to the latest global estimates, there are still 25 million men, women and children trapped in forced labour. A note recently published by the ILO has highlighted that the COVID-19 pandemic has increased the risk of the most vulnerable workers, including migrant workers, to get tricked and trapped in forced labour. The risk of increasing debt bondage is particularly important.

On depositing the instrument of ratification, the Permanent Representative of the Kingdom of Saudi Arabia, Ambassador Abdulaziz Al Wasil, declared: “the ratification step comes in the context of the Kingdom’ continued commitment to combating forced labour and human trafficking. Protocol 29 will strengthen the current legal framework in Saudi Arabia and will help the Government take further steps to protect workers from fraudulent and abusive practices”.

Receiving the instrument of ratification, Guy Ryder, Director General of the International Labour Organization, said: “I am pleased to receive this instrument of ratification, which reflects the commitment of Saudi Arabia to combat forced labour in a period of time in which many workers are at greater risk of failing into situations analogous to slavery due to the economic crisis generated by the COVID-19 pandemic. Saudi Arabia’s ratification of the Protocol also marks an important precedent in the Gulf region in the fight against human trafficking”.

At the national level, in 2009, Saudi Arabia adopted a Human Trafficking Act and established a standing committee to combat trafficking in persons. In 2017, it also adopted a National Plan for Combatting Human Trafficking. With the support of the United Nations Office on Drugs and Crime (UNODC), the Government has implemented a national referral mechanism on trafficking in persons, to ensure coordination in the area of protection, assistance and care for victims of trafficking in the country. In addition, Saudi Arabia has undertaken efforts to protect migrant workers victims of forced labour, including the implementation of corrective regulatory measures such as passport recovery, transfer of servicers, cancellation of malicious absconding reports, and termination of contractual relationships, among others. 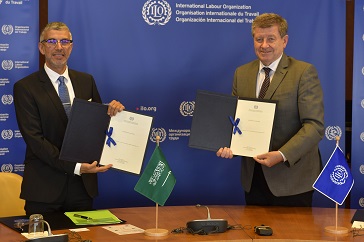